Three persons have been booked for assaulting doctors at the Government Stanley Medical College Hospital on Sunday. The assault had occurred at about 12.30 a.m. near the operation theatres. Police arrested Prem Kumar, Raja and Ranjith Kumar — all in their 20s — and are on the lookout for the fourth person.

“A child was brought to the hospital with an injury on the toe at midnight. A house surgeon had gone to the operation theatre to prep the surgery table. In that time, four persons, who had accompanied another patient, created commotion saying that treatment for the child was being delayed and attacked him. When post graduate medical students on duty came to his rescue, they were physically assaulted as well,” S. Geethalakshmi, hospital dean said.

PGs Avinash and Arokiya Michael Raja sustained injuries in the assault. Following this, around 200 house surgeons, PGs and doctors on duty gathered at the spot and nabbed the assaulters. Later, the doctors staged a protest near the hospital entrance for nearly an hour, from 9.30 a.m on Sunday.

A senior police officer said the timely intervention prevented the issue from escalating into a major State-wide protest. “The trio did not have any business to interfere with the treatment of the child as they were not related to the child’s family; they did so in a drunken state. In 15 minutes, we mobilised 50 constables to the hospital to provide security. We have remanded the trio. One more person named Satish is absconding,” he said.

Latest February transfer talk. | Maso…
11 things to do on vacation with out …
Common Problems with Slit Lamp and Re…
Home Workouts for Weight Loss
Telegram Marketing solutions 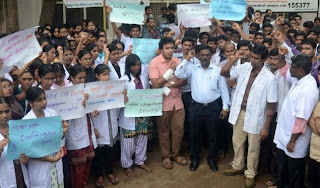