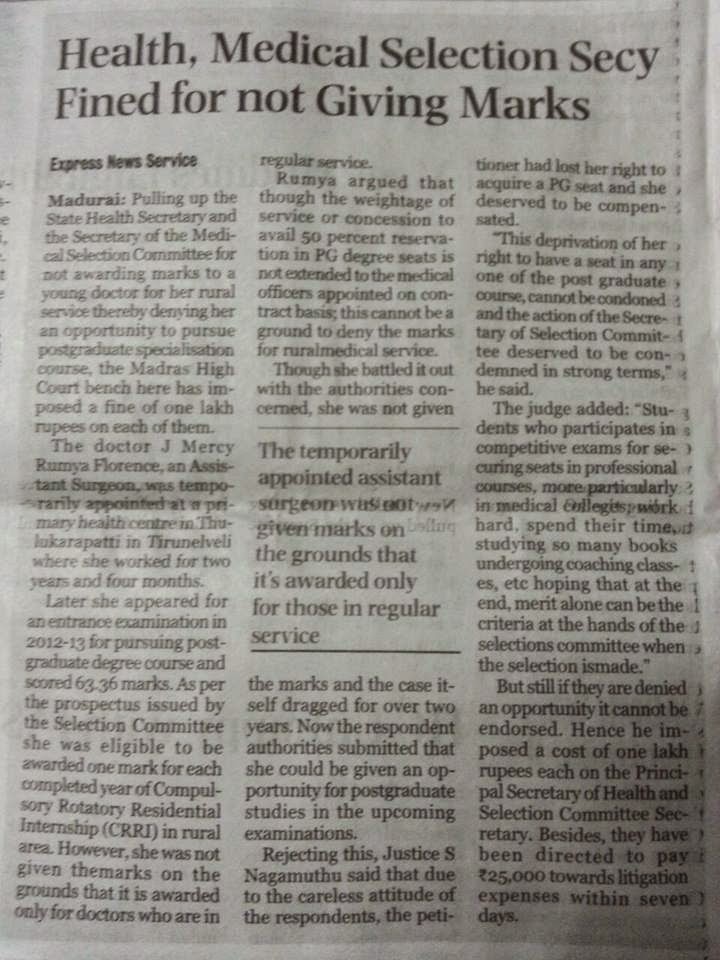 Pulling up the State Health Secretary and the Secretary of the Medical Selection Committee for not awarding marks to a young doctor for her rural service, thereby denying her an opportunity to pursue postgraduate specialisation course, the Madras High Court bench here imposed a fine of `1 lakh on each of them.

The doctor J Mercy Rumya Florence, an assistant surgeon, was temporarily appointed at a primary health centre in Thulukarapatti in Tirunelveli where she worked for two years and four months. Later, she appeared for an entrance exam in 2012-13, for pursuing postgraduate degree course and scored 63.36 marks. As per the prospectus she was eligible to be awarded one mark for each completed year of Compulsory Rotatory Residential Internship (CRRI) in rural area. However, she was not given the marks on the grounds that it is awarded only for doctors who are in regular service. Justice S Nagamuthu said that due to the careless attitude of the respondents, the petitioner had lost her right to acquire a PG seat and she deserved to be compensated for it.


This post first appeared on Doctors And Law, please read the originial post: here
People also like
11 things to do on vacation with out the kids
Witnessing an Aggressive Event
Home Workouts for Weight Loss
Telegram Marketing solutions
Private And Luxury Chauffeur Melbourne Service For Your Convenience.
Pineapple juice benefits for skin
What You Need to Know About Sydney Epoxy Flooring
Legit Way To Make Money Online
Portfolio Review: Happy Birthday, Paramount+!