Can we prevent Diabetes?

Tags: insulin insulin resistance
June 7th 2006
View original
Type II diabetes, is associated with increased plasma Insulin concentration (hyperinsulinemia). This occurs as a compensatory response by the pancreatic beta cells for diminished sensitivity of target tissues to the metabolic effects of insulin, a condition referred to as insulin resistance.
Prediabetes is a condition in which blood glucose levels are higher than normal but not high enough for a diagnosis of diabetes.

What is Insulin Resistance?

Every type of carbohydrate we eat is eventually converted to a simple form of sugar known as glucose. Pancreas senses the abundance of glucose in the bloodstream after a meal and secretes Insulin; Insulin acts on muscle & tissue cells and helps the sugar from blood to enter in the cells where it is used for energy.
In Insulin Resistance cells start to become resistant to Insulin. Therefore the blood sugar levels are high as the glucose can’t make into the muscle cells. Pancreas produces more insulin to compensate and the sugar levels are normalized. 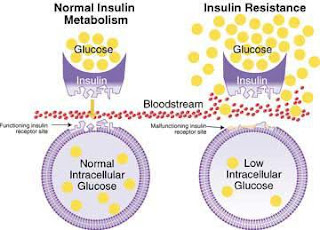 1. Obesity/overweight (especially excess visceral adiposity)
2. Excess glucocorticoids (Cushing’s syndrome or steroid therapy)- decreases the sensitivity of
various tissues to the metabolic effects of insulin and can lead to development of diabetes mellitus.
3. Excess growth hormone (acromegaly)
4. Polycystic ovary disease- is associated with marked increases in ovarian androgen production and
insulin resistance and is one of the most common endocrine disorders in women.
5. Lipodystrophy (acquired or genetic; associated with lipid accumulation in liver
6. Autoantibodies to the insulin receptor
7. Mutations of insulin receptor
8. Mutations that cause genetic obesity (e.g., melanocortin receptor mutations
9. Hemochromatosis (a hereditary disease that causes tissue iron accumulation)
Risk factors for Insulin resistance
1. being physically inactive
2. are overweight with a body mass index (BMI) more than 30
3. Abdominal obesity
4. having a family history of diabetes, hypertension, heart diseases
5. having high blood pressure
6. having an HDL cholesterol level below 35 mg/dL or a triglyceride level above 250 mg/dL
7. having a history of cardiovascular disease
8. are over 40 years of age
9. have had gestational diabetes

With prolonged and severe insulin resistance, even the increased levels of insulin are not sufficient to maintain normal glucose regulation. As a result, moderate hyperglycemia occurs after ingestion of carbohydrates in the early stages of the disease.
In the later stages of type II diabetes, the pancreatic beta cells become “exhausted” and are unable to produce enough insulin to prevent more severe hyperglycemia.

Unlike Diabetes Insulin resistance is a treatable condition. If we treat Insulin Resistance in time Diabetes can be prevented in future. Studies have shown that most people with prediabetes develop type 2 diabetes within 10 years, unless they lose 5 to 7 percent of their body weight.

Examples of foods with a low glycemic index include:
1. foods with higher fiber content such as whole grain breads and brown rice;
2. non-starchy vegetables (for example, broccoli, green beans, asparagus, carrots, and greens).

Several studies have shown that weight loss and aerobic exercise (without weight loss) increase the rate at which glucose in the blood is taken up by muscle cells as a result of improved sensitivity of the cells to insulin.

1. Metformin
It increases the sensitivity of muscle and fat cells to insulin to increase glucose uptake
2. Acarbose
Acarbose works in the intestines to slow the absorption of sugars, and this effect would reduce the need for insulin after meals. The study found that acarbose reduced the development of diabetes by 25%.

Ion Magnum was invented by Nobel winning Gerry Pollock & it is the only non-surgical technology to reduce Visceral fat. When we exercise our brain sends signals to the corresponding muscles. Ion Magnum mimics these signals to give you the benefits of an intense, professional workout minus the pain, physical exertion or inconvenience of conventional exercise. Ion Magnum reduces both surface & visceral fat which gives immense health benefits. You can get better control over Diabetes & Heart disease. It also improves muscle mass which further improves metabolism to initiate weight loss.

Can we prevent Diabetes?