Tags: cake birthday
February 28th 2009
View original
I didn't think I wanted a birthday cake.
In the nearly 3 years I've been gluten-free, I've found it easier to simply steam roll over events and feelings that make me feel left out. Why spend holidays thinking about challah you didn't have or Birthday cakes you couldn't eat?

Homemade No Churn Raspberry Ice Cream
Full-Time Gambling — Viable Professio…
12 of the UK’s best independent books…
Still, it had been 3 years since I blew out birthday candles. Part of that was college life, most of it was lack of a proper cake, and if I'm honest, I secretly longed for such an experience...
But still, I didn't think I needed a birthday cake. Sure, professionally decorated, store bought, made especially for me was a nice daydream, but here in the Midwestern real world where money is tight and gluten free bakeries don't exist? Such a thing was a pipe dream, and one I hardly felt like wasting time worrying about. Besides, I'm becoming quite the little baker. I figured if I truly wanted a cake, I'd just make my own.
Surprisingly, my boyfriend sternly put his foot down. Absolutely not. It's your birthday, Dana. You are not making your own cake.
Sweet, silly boyfriend, I thought, he thinks he can find a gluten-free bakery in Ann Arbor. Sure a year and a half ago he was sure all restaurants offered gluten-free options, but had 18 months of calling ahead every time we went out to eat, or worse, him watching drinking a glass of water while he apologized through his steak/Mexican/Chinese dinner taught him nothing? Oh well, I thought, maybe he's just going to make me a cake himself. 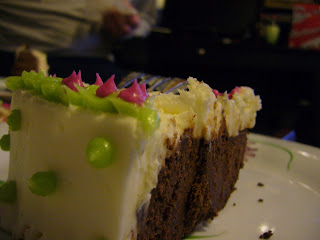 And had he not found the Jefferson Market and Cakery, he may have just baked his first gluten free pastry. Lucky for us both, though, nestled a few blocks away from Ann Arbor's Main Street, in a sleepy residential community of side streets sits the home of the prettiest, yummiest cakes in all of Michigan. Dealing primarily in special event cakes (the beautiful kind of wedding cakes that are enough to make you want to get married tomorrow), the quaint Cakery is filled with a whimsical magic I've rarely felt since my childhood birthdays. You know, that prickly, near tangible excitement that whispers this is going to be a special day. Upon stepping into the Cakery, such a promise enters your body via a sugary scent picked up by your nose and settles warmly, comfortingly in your bones.
But the name practically does it on it's on, doesn't it? Cakery. It's impossible not to say that word and smile, imaging the possibilities.
As far as gluten-free options go, the good people at the Jefferson Market and Cakery were able to offer us a gigantic, frosted flourless chocolate cake. A cake, with my name professionally pipe in pink frosting across the top.
At about 12 inches around, the cake was seemingly gigantic large thanks to its thick, dense 5 inch high chocolate amazingness. Unbelievably, they actually gave my boyfriend an option of making this behemoth of a birthday cake a layer cake, with option upon option of fruity compote, citrus curds, or butter cream piled thick between the layers.  As delicious as hazelnut or lemon cream sounds, I'm so, so glad he settled with a simple vanilla icing on chocolate cake. After taking eyes-are-bigger-than-our-mouths slices and barely getting 2/3rd of the way through those, the idea of another layer of that cake is....mindboggling.
While at $40, this was certainly a special event only cake, I can say we've happily enjoyed every cent - and every crumb - of it.  And after a week, when we'd only slogged through half of the thick chocolate goodness, I sliced up the remained, wrapped it up in aluminum foil, and froze it, ensuring we'd have sweet memories of my lovely birthday and cake for weeks to come. 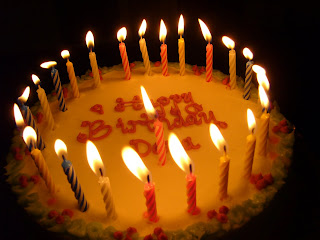 I called to thank the Jefferson Market and Cakery for making my birthday so special, and was pleased to find out that, upon request, they can also prepare gluten free coconut macaroons and gluten free almond cookies. It might not be a huge selection, but the mere fact that a bakery is willing to be so accommodating to the celiac community, so willing to not just provide a product, but also to consult on their product, ensuring that the cake makes the birthday as special as it can be? Well that's more than creating a specialized birthday cake, its creating a special birthday.
In the end, the Cakery and my boyfriend provided me with the best of birthday surprises, a present I hadn't even realized I wanted it. As we stuck every last candle from the 24 pack into my cake (23 plus 1 for good luck), lit the candles, and turned out the lights, I bathed in the warm glow of a true birthday.
It was the best present a girl could hope for.