This Is What You Need To Know About Little Boy, Before Tubelight Hits The Screen

Before Salman Khan’s Tubelight hits the screen on June 25, here are ten amazing things, you need to know about the original inspiration behind the movie, yes! The Hollywood film Little Boy.
Tubelight, starring Salman and Sohail in the lead roles, is releasing across India on the occasion of Eid. Besides being one of the most anticipated movies of the year, Tubelight, is an official adaptation of the Hollywood movie Little Boy. 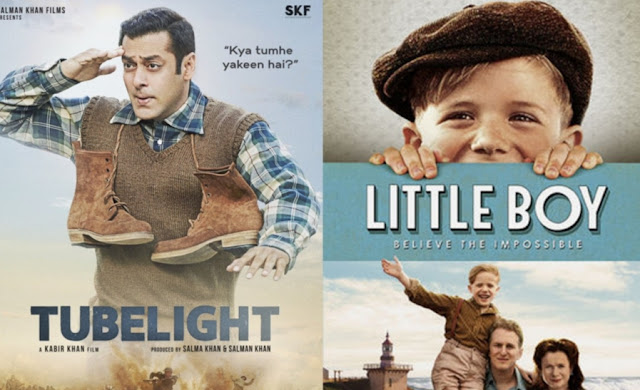 Directed by Alejandro Gomez Monteverde, Little Boy is a story of an eight-year-old boy who shared a very special relationship with his father. He was devastated with the incident when when his father left home to join the military to fight in Japan during the World War II.
Know the facts about the movie:
1. The film took the title from the code-name of the atomic bomb that US dropped on Hiroshima, during the World War II.
2. The film was set in a fictional town called O'Hare, California.
3. Over 1,000 kids were auditioned for the lead role of the film, Pepper Flynt Busbee, the little boy with supernatural powers. Jakob Salvati bagged the role when he was only seven years old.
4. Jakob Salvati, who plays the titular role in the film, is a young actor with an extensive work to his credit. The 13-year-old actor appeared on episodes of Mad Men, Grimm and Red Widow. He also acted in the independent dark horror film Escape From Tomorrow.
5. Salvati is also credited to be a singer and dancer.
6. The movie, Little Boy was panned by critics for displaying faith in a bad light. In the film, the boy with special powers wished for his father to come back from war. Little Boy was criticised for showing a world where miracles happened by killing lakhs of people just to get rewards for the believer.
7. In the movie, Pepper brought an earthquake in Japan with his special powers in an effort to get his father home from a POW camp.
8. The famous Hollywood actor, Kevin James, who plays the character of Dr Fox in Little Boy, liked the script a lot that he decided to do the film for free.
9. In the movie, Pepper befriends a Japanese man because he wants to get over his hatred for the Japanese, in order for his faith to work so that he can bring his father back home. In Tubelight, Salman's character Laxman is supposed to befriend a Chinese boy. Tubelight is set against the backgrounds of 1962 Indo-China war.
10. Emily Watson, who enacted the role of Emma Busbee in Little Boy, acted in three World War II dramas before the movie.
Tubelight, directed by Kabir Khan, is slated to release on Eid this year.
Hope you guys like the fascinating facts about the movie Litle Boy.
Stay connected with CRB Tech Reviews to know more about Bollywood gossips and news.

This Is What You Need To Know About Little Boy, Before Tubelight Hits The Screen