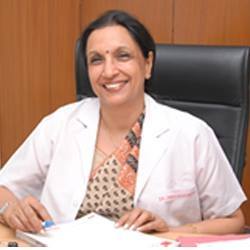 Prof. Dr. Abha Majumdar is the Director and Head of the ‘Centre of IVF and Human Reproduction’ at Sir Ganga Ram Hospital New Delhi. She has been attached to the hospital since 1987 as consultant Obstetrics and Gynaecology. She was a part of the formative team of this IVF centre since its inception in the year 1990. She has been in the team of doctors responsible for the first IVF baby born in 1991 and the first frozen ooctye baby born in Jan 2009 of Northern India.
Dr. Abha Majumdar did her MBBS and MS (Obs/Gyn) from S.N. Medical College, Agra and was awarded fellowship of the international college of surgeons (FICS) in 1994. The title of professor was conferred to her by GRIPMER University in 2013.
During her graduation she was the recipient of 7 gold medals, President’s silver medal for the best medical graduate 1974, Chancellor’s medal for the best student of the university 1974 and received certificate of honours in 9 subjects during the MBBS tenure. She was felicitated by Dr. B.C Roy’s award in July 1999 by DMA, awarded Nations Vikas Ratan Award in 2002, Chikitsa Ratan Award in 2007,  ‘Life time achievement award’ for medical excellence in Obstetrics and Gynecology by Hippocrates foundation in 2014 and ‘Abdul Kalam Gold medal’ by Global Economic Progress and Research Association in 2015.
Her field of interest is in management of all cases related to infertility with special focus on assisted reproductive techniques (IVF and associated technologies), reproductive endocrinology, laparoscopic and hysteroscopic corrective surgery, open surgery and microsurgery for pelvic resurrection for diseases causing infertility.
Releted Links
Follow Me On Twitter & Facebook - Treatment Origin - Hub Of Doctors