Pastor with 10 children. He called gays ‘sinners’ and praised the Orlando shooting is found guilty of child molestation

A controversial anti-gay Baptist pastor, Bishop Kenneth Adkins, 57, of Brunswick, who has been married 4 times and has 10 children, has been found guilty on all eight charges in the sexual molestation of a teenage girl and boy at his church, which took place seven years ago.  Adkins made the headlines last year when he said homosexuals got ‘what they deserve’ after Omar Mateen massacred 49 people at a Florida gay club.
Since Adkins has a previous criminal history , and because of Georgia’s strict sentencing, he may never be a free man

What to wear: outfit ideas for Christ…
Former Malta Government Official Beco…
Reviews 66 The Collegium Chronicles N…
A Balanced Response to Allen Gwinn
18+ Adult Movies Of All Time To Fulfi… 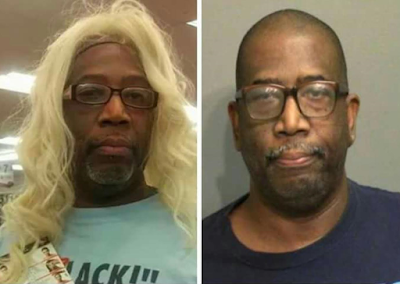 On Monday, a Georgia jury of three men and nine women found Kenneth Adkins guilty on all charges. It took the jury only about an hour to deliberate and reach their decision. After the verdict was read, Adkins showed no emotion. He will be sentenced April 25.

None of his family members was present for the verdict and none showed up during the entire one week trial.

Adkins, a drug addict-turned-PR boss-turned-preacher, was arrested in August last year, two months after he made national headlines about the shootings at the Orlando gay club Pulse, when he tweeted:

‘Dear Gays, Go sit down somewhere,’ he tweeted on June 13, the day after 49 people were killed and many more injured. ‘I know y’all want some special attention. Yall are sinners who need Jesus. This was an attack on America.’ 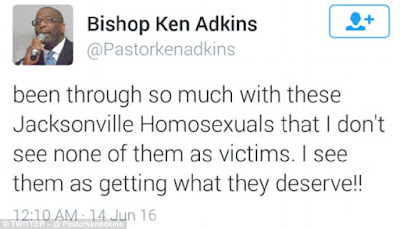 ‘Been through so much with these Jacksonville homosexuals that I don’t see none of them as victims. I see them as getting what they deserve!!’

On Monday, a jury felt he got what he deserved.  Over a week of testimony, they had heard how the victim had been groomed by the firebrand preacher. The victim, who is not being named, said that Adkins had become a ‘father figure’ to him after his grandfather died, but that the relationship turned sexual in 2010.

He explained how Adkins had bought him gifts and began calling him and texting him, News4Jax reported. The preacher had sent him pictures of his penis, the victim said. Eventually Adkins told the teen that he wanted to watch him have sex with his girlfriend, to make sure he was doing it properly, the court heard. The preacher then joined the pair in the sex acts, he said. The victim told the court he’d ‘lost count’ of the times the three had been involved in sexual situations in the church office, in Adkins’ car, and at the beach.

Preacher: Adkins is a drug addict-turned-PR-man-turned-preacher. His prior convictions mean he may never be a free man. None of his ten children were in court for the trial The girl in question – who was named in five of the charges Adkins was found guilty of – testified that the events had never happened. But the prosecution claimed that the girl was under his influence. ‘She’s in his clutches,’ said assistant district attorney Katie Gropper. ‘What he has done to that girl is not only criminal, it is deplorable.’

Most of Adkins’ defense was based not on denying the claims made by the victim, but on questioning whether he and the girl were actually 15 at the time, or 16. Had the pair been 16, they would have been legally capable of consenting to sex with Adkins under Georgia law. In his closing statements – which took an hour and 20 minutes – defense attorney Kevin Gough told the jury eight times that even if they disliked Adkins, he should not be found guilty of ‘hypocrisy’. ‘Where is the evidence that any criminal act took place?’ he asked. ‘It may be awkward at public events, church, if you return an innocent verdict, but [be] assured, you should not take that into consideration.’

Georgia has strict mandatory minimum sentencing laws and because Adkins has a prior record of drug convictions, there’s a possibility he will never be a free man.

This post first appeared on Blog Posts – Parenting Blog|Parenting Advice And, please read the originial post: here
People also like
What to wear: outfit ideas for Christmas & summer
Former Malta Government Official Becomes Whistleblower—in NFT Form
Reviews 66 The Collegium Chronicles Novels of Valdemar by Mercedes Lackey
A Balanced Response to Allen Gwinn
18+ Adult Movies Of All Time To Fulfill All Your Sexual Fantasies| Lolita, Exotica and More
An Officer and a Spy
5 Tips For Protecting Your Cryptocurrency Investments

Pastor with 10 children. He called gays ‘sinners’ and praised the Orlando shooting is found guilty of child molestation