In 2008, Karen Matthews faked the Kidnap of her 9yr old Daughter in order to claim a huge chunk of Reward Money. She and an accomplice, Michael Donovan drugged and tethered Shannon under a divan bed in a compartment at flat one mile from where she lived as part of a desperate plot to claim £50,000 in reward money. 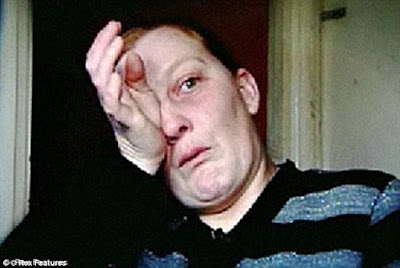 While the police launched a manhunt that cost the taxpayer £3.2million, Matthews was regularly seen on TV appearing distraught and in tears at the disappearance of her daughter. Her cover was blown when police discovered Shannon 24 days after her disappearance.

The mother of seven and her accomplice were jailed for eight years for kidnapping, false imprisonment and perverting the course of justice. After her release, she moved miles away from where she used to live and reports have it that she has totally turned a new leaf after turning to God in a bid to turn her life around.

It is reported that the 41-year-old has started to attend bible study sessions, has stopped drinking alcohol and prays every day. According to a friend who spoke to The Sun, the former convict said: ‘I know I did something wrong but I’m not the baddest person people are making out. I am sorry for hurting people.

‘I’ve hurt my family. My friends that supported me at the time, I’ve hurt them.’
Looks like she’s making the most of her second chance.