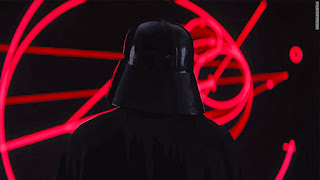 Darth Vader is the most fearsome villain in the history of cinema, who unleashes the most furious passions in the moment to choosing the worst. But Darth Vader is a human with one story. Darth is not entering in the movie as him. Darth is Anakin, and Anakin does not have his mother. His mother does not know who the father is. Maybe the boy was an unwanted pregnancy, on a planet like Tatooine where life is nothing, and possible product of a rape. Her mother is a slave on a planet where she serves a deformed being, a demon, a decadent form of life. Imagine yourself, dear reader, who does not have a family, who doesn’t know who his father is, doesn’t have uncles, grandparents, brothers, cousins. And even more, a Jedi Lord, a stranger, arrives at his house and his mother gives him without fighting, without hesitation, donates, separates, excretes, gets rid of the beget, with the excuse that will have a better future than a slave. In times of crisis it is demonstrated that families need to be united. Separating families suffer serious disorders. Many animals kill their offspring in times of crisis

The mother tried to get rid of him. What kind of mother would allow your child to expose him to mortal situations, such as Pods competitions? And not once. She admits she "suffers" when Watto forces him to run. When the child tells her that he will not go with Qui-gon-jinn, she says "but Ani."
That is the dilemma of Anakin, the little villain. His mother rejects him and he seeks a reason. Why did my mother get rid of me? Did not he want me? Was I a mistake? Should not I have existed? They are thoughts that very sure existed in the mind of the child who seeks to please others. He even has an attitude of self-humiliation when asked for favors. He is able to give to please others who accompany him. That is why it is difficult to train, because those who took it try to forget it for advancement. But Anakin refuses. That is why he returns to find his mother Tatooine. Not because he loved her. He seeks answers. It is there that when her mother dies her anger rages until he kills to those who have taken away her answers, not her mother.

When he falls in love with someone older than him, Queen Padme Amidala, he does so with maternal projections on her. He does not see just one beautiful woman. He seeks to his mother. So when he has sex with Padme Amidala he does it with his mother. It is the culmination of an Oedipus, an unresolved Oedipus.

Every child that suffers a post-traumatic stress has flashbacks, which torments especially like lived dreams that have after the intimacy (they are at dawn next to Padme in the amatory bed). These flashbacks lead to avoidant behaviors and sociopathy. Those who snatched his mother now want to take back what he loves the most (and hates at the same time). That is Anakin's dilemma. He loves and hates his mother with strength, and Padme symbolizes that good mother, that mother who cans to destroy his fears.
That is why it is so easy to seduce him to the "dark side".

The emperor, Chancellor Palpatine, represents the way to carried away his anger. But impresses a release, the contact between them let to see their fears and the old man can use them. Moreover, the Jedis for Anakin represent their oppressors, those who took away their mother. Darth Sidious offers the possibility that "mother" does not go again. Anakin's primeval fear, the impeller of his challenges, may have a happy ending with the promise of Sidious. It is therefore easy for him to reassure his oppressors. However, he follows a path that leads him to follow his "do not live" mandate. By being carried away by the promises of sidious, it distances the one he loves. It establishes a Hamartic destination, a death script. Padme dies, and Anakin as human dies. From there Darth Vader is born.

Vader's struggle is against his fate. He needs power so that those who love him do not leave. He needs love, but only gets negative caresses. "He wants love" but he does not get it, he doesn't know how to ask. That is why he prefers negative caresses rather than indifference. His subsequent struggle focuses on approaching his children, hence his great struggle to find Luke Skywalker and Leia. His two sons.

Leia is the symbolization of Anakin's rebellious child. Therefore it embodies the "Rebellion". The first meeting between Vader and his daughter is more a wake-up call. He encloses she in her room (cell) so she can reconsider her options. It does not kill it. His other encounters are similar. Luke is the same. He wants to see his son, but there is someone who will not let him: Obi-wan Kenobi, a guest more, as a lawyer. The struggle between Obi-Wan and Anakin is like two parents who believe they have a right. The gossip assumes his role and lets himself die because he no has longer functions.

The fight in episode V is epic. "Luke I am your father" is said with love and not with fury. It is the moment when Darth comes in contact with his nutritious father, his healthy part, and his son rejects it. It is there that Darth reconfirms his mandate and struggles with him: "My son does not love me better, I kill myself. But since I do not want to die then I kill him. " Darth denies the possibility of having other children, no other things are known to him. Being the master of the universe is not known couple. Except that he was castrated in Episode III when they fight on the mining planet. Therefore, more heard to Obi-wan, a castrator.

Very possibly Dath suffers from anorexia nervosa in addition to a personality disorder. What is certain is that Darth Vader suffers from a PTSD