The Calum Von Moger Workout: Does it Work?

People call Calum von Moger the “Arnold Schwarzenegger” of his generation. The Australian bodybuilder — who is of Dutch and Austrian descent (like Arnie)— seems destined to follow in Arnold’s footsteps. Schwarzenegger won his first Mr. Universe at 23 and went on to win the competition 4 times!

These Are the NBA, NFL Stars In Bored…
Review: ‘The Atomic 44s–Volume One’
18+ Adult Movies Of All Time To Fulfi…
Ski Holidays in Switzerland: How to P…
Tyler Perry’s Sistas live stream: Wat…
A self-described skinny kid, Calum started out lifting rusty old weights in an empty warehouse, motivated by the goal of one day being as strong as his older brother. He has now taken it a lot further than that!

Calum’s workout routine includes up to three hours of training each day. He does one hour of cardio and up to two hours of weights. He follow this workout routine six days a week and to fuel his performance in the gym he eats roughly every two hours.
When asked about the similarities he shares with Arnold Swartzenegger, Calum says: “I’ve looked up some pics and I can see why people say there are similarities. But I don’t want to be typecast as that or be in his shadow. The most important thing is to be yourself, whoever you are.”

Need some inspiration for your workouts? Watch this short documentary on Calum Von Moger’s rise to fame.

An excellent video from Bodybuilding.com that follows Calum’s full chest routine in the gym.

Follow Calum as he does his back workout in this short 2-minute video.

This is how Calum Von Moger rolls on his rest days. 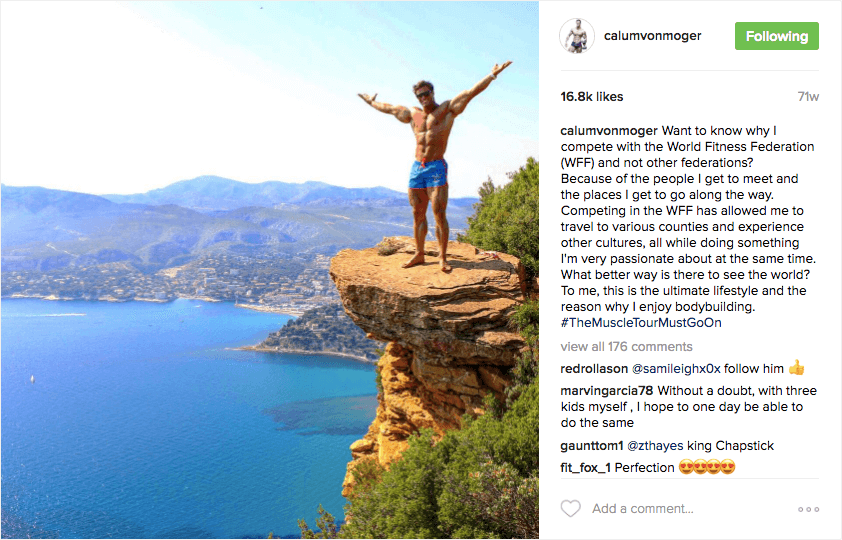 After a short introduction, this video follows Calum’s workouts at his gym in Venice Beach.

A short video Calum recorded on his iPhone showing a quick overview of his legs workout.

A documentary-style video with an interview and instructions from Calum for how he works out his massive arms.

Another great workout from Calum for your biceps and triceps that is worth watching.

The Calum Von Moger Workout: Does it Work?