Q. 1.Define attitude. Discuss the components of an attitude.
Ans.: Attitudes are state of the mind, set of views or thoughts or ideas regarding some topic which have an evaluative feature (positive, negative or neutral). These are relatively stable predispositions. .
Various components of an attitude are as follows:
(i) The thought component is referred to as the cognitive aspect of Attitude.
(ii) The emotional component is known as the affective aspect.
(iii) The tendency to act is called the behavioural (conative) aspect.
These three aspects have been referred to as the A-B-C (affective-behavioural-cognitive)components of attitude. Attitudes are themselves not a tendency to behave or act in certain ways. They are part of cognition, along with an emotional component which cannot be observed from outside. 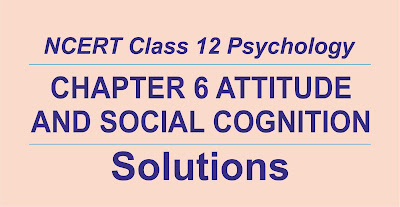 Q. 2. Are attitudes learnt? Explain how?
Ans.: By enlarge attitudes are learnt. They are formed on the basis of learning.
Formation of Attitudes:
The term ‘attitude formation’ refers to the movement we make from having no attitude toward an object to having a positive or negative attitude. There are some factors which contribute to the formation of attitudes:
1. Learning:
The attitudes are acquired through learning. Many of our views are acquired in situations in which we interact with others or merely observe their behaviour.
-Classical Conditioning / Leaming by Association:
-Instrumental Conditioning  /Leaming Altitude by Reward and Punishment:
A basic form of learning in which responses that lead to positive outcomes or that permit avoidance of negative outcomes are strengthened.
-Observational Learning:
A basic form of learning in which individuals acquire new forms of behaviour or through observing others.
2. Learning through Exposure to Information:
3. Learning Attitudes through Group or Cultural Norms:
Q. 3.What are the factors that influence the formation of an attitude?
Ans.: The following factors provide the context for the learning of attitude through various processes:
(i) Family and School Environment: parents and other family-members play a significant role in attitude formation. Learning of attitudes within the family and school usually takes place by association, through rewards and punishment and through modelling.
(ii)Reference Groups: Attitudes towards political, religious and social groups, occupations, national and other issues are often developed through reference groups. Reference groups indicate to an individual the norms regarding acceptable behaviour and ways of thinking. Various institutions, religion, culture and communities are form of reference groups.
(iii) Personal Experiences: Many attitudes are formed, not in the family environment or through reference groups, but through direct personal experiences which bring about a drastic change in our attitude towards people and our own life.
(iv) Media Related Influences: Technological advances have made audio-visual media and internet as very powerful sources for attitude formation. School textbooks also influence attitude formation. The media can be used to create consumerist attitude. The media can exert both good and bad influences on attitudes.

Q. 4. Is behaviour always a reflection of one’s attitude? Explain with a relevant example.
Ans.: An individual’s attitude may not always be exhibited through behaviour. Likewise one’s actual behaviour may be contrary to one’s attitude towards a particular topic. Psychologists have found that there would be consistency between attitude and behaviour when:
(i) The attitude is strong and occupies a central place in the attitude system.
(ii) The person is aware of his/her attitudes.
(iii) Person’s behaviour is not being watched or evaluated by others.
(iv) Person thinks that the behaviour would have a positive consequences.
Richard La Piere, an American social psychologist, conducted the following study. He asked a Chinese couple to travel across the United States, and stay in different hotels. Only once during these occasions they were refused service by one of the hotels. La Piere sent out questionnaires to managers of hotels and tourist homes in the same areas where the Chinese couple had travelled asking them if they would give accommodation to Chinese guest. A very large percentage said that they would not do so. This response showed a negative attitude towards the Chinese, which was inconsistent with the positive behaviour that was actually shown towards the travelling Chinese couple. Attitudes may not always predict actual pattern of one’s behaviour.

Q. 5. Highlight the importance of schemas in social cognition.
Ans.:
Q. 6. Differentiate between prejudice and stereotype.
Ans.: Prejudices are negative attitude.
(a) Affective (Emotional i.e dislike or hatred).
(b) Behavioural (i.e., discrimination).
(c) Cognitive (Believes, i.e., stereotypes).
Stereotypes are cognitive component of prejudice. It is strongly influenced by the processing of incoming social information.
Q. 7. Prejudice can exist without discrimination and vice-versa. Comment.
Ans.: Prejudices can exist without being shown in the form of discrimination. Similarly,
discrimination can be shown without prejudice.
Q. 8. Describe the important factors that influence impression formation.
Ans.: Impression formation is a process by which impression about others is converting into more or less induring cognitions or thoughts about them.In short, impression formation is a process through which we draw quick conclusion/ inferences regarding others.
Factors facilitating Impression Formation:
The process of impression formation consists of the following three sub-processes:
Some specific qualities, that influence impression formation, are:
Q. 9.Explain how the attribution made by an ‘actor’ would be different from that of an ‘observer’.
Ans.: Actor observer phenomena refers to the tendency to attribute our own behaviour mainly to situational causes but the behaviour of others mainly to internal (dispositional) cause.
A distinction is found between the attribution that a person makes for actorrole and observer-role.
Person makes attribution for his/her own positive and negative experiences, it is actor role and the attribution made for another person’s positive and negative experience is observer-role.
For example, if we get good marks, we will attribute it to our own ability and hard work (actor-role, internal attribution for a positive experience). If we get bad marks, we will say we were unlucky or test was difficult (actor-role, external attribution for negative experience).
On the other hand, if our classmate gets good marks, we will attribute his/her success to good luck or easy test (observer-role, external attribution for positive experience). If same classmate gets bad marks, we are likely to feel that his/her failure was because of low ability or due to lack of effort (observer-role, internal attribution for a negative experience).
The reason for the difference between the actor and observer roles is that people want to have a nice image of themselves, as compared to others.

Q. 10. How does social facilitation take place?
Ans.:
Better performance in presence of others is because the person experiences arousal, which makes the person react in a more intense manner.
The arousal is because the person feels he or she is being evaluated. Cottrell called this idea evaluation apprehension. The person will be praised if performance is good (reward); is criticised if performance is bad (punishment). We wish to get praise and avoid criticism, therefore we try to perform well and avoid criticism.
As in case of complex task, the person may be afraid of making mistakes. And the fear of criticism or punishment is stronger.
If the others present are also performing same task, this is called a situation of co-action. When task is simple or a familiar one, performance is better under co-action than when the person is alone.
Task performing can be facilitated and improved or inhibited and worsened by the presence of others. If we are working together in a larger group, the less effort each member puts in. This phenomena is called social loafing, based on diffusion of responsibility. Diffusion of responsibility can also be frequently seen in situations where people are expected to help.

Q. 12.Your friend eats too much junk food, how would you be able to bring about a change in his/her attitude towards food?
Ans.: Since my friend eats junk food, it will have some reinforcing value to him/her. In order to bring about a change in his/her attitude towards food, following techniques could be used:
First of all what needs to be targeted is ‘the way he/she thinks about junk food, i.e., the cognitive aspect of his/her positive attitude towards junk food. The modification in his/ her attitude can be achieved through using rational as well as emotional appeal and, if required, help of a dietician whose credibility in this area is very high will be of great use. Attitude changes may be brought about by:
1. Encouraging him/her to read about what is required for a healthy development, e.g., minerals etc. which are not found in junk food.
2. Showing him/her the negative consequences of eating junk food like obesity, other health-related problems by exposing him/her to real life examples.
3. Request people around him/her like family-members, elders and teachers whom he/ she likes. If they provide a role model, i.e., not to consume junk food then he/she will imitate their behaviour.
4. Giving his/her choice and space to decide what is right for him/her considering both the aspects of the food and asking him/her to focus and think about the future problems associated with his/her liking.
All these things can bring about cognitive dissonance which might ultimately bring about the attitude change.