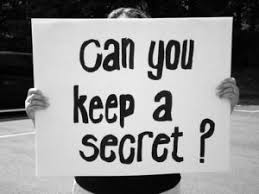 Depression is happiest when I am keeping secrets.

It loves when I sneak around and don’t share what it is telling me. All those crazy plan’s Depression has suggested to me over the years involve me keeping them hidden from others.

This has included major issues relating to my job. And many minor issues like canceling our back up internet service at the house without speaking to those who were using it.

10 of the best places to visit in Por…
Dead Ends in Cryptanalysis #2: Timing…
What Is the Worst Credit Score?
An Officer and a Spy
Cabbage Production Guide

READ: My depression wants me to keep secrets again

There is no secret that after three weeks on Wellbutrin, depression is retreating.

And I am elated. But this is really making depression angry. And depression is not going without a fight. It never does. Last week there was a day where I felt so alone, I wanted to sell everything and move deeper into the woods. Of course, depression was championing this idea. And it was a secret, I was not to tell anyone. After all, they wouldn’t understand in the same way depression understands me.

It was the end of October the last time I was able to get up without negotiating with myself.

But this morning, after only 6 hours of sleep, I felt rested enough that it was time to get up. AND I GOT UP. There was no debating with myself, no negotiating for an additional 5 minutes. I felt rested and I got up.

Although I have been talking about the positive change Wellbutrin has made, I am still mostly keeping it a secret.

I do not want to jinx it. While the Prozac initially helped, in larger doses, I felt lethargic. Getting out of bed, as you know if you’ve read my older posts, could be a nightmare. And then there was that first hour or two where my head was muddled, and I couldn’t really focus.

Instead of keeping things to myself, I have been more open and sharing with Wellbutrin.

My keeping secrets is one of the best tools depression uses to keep me under its wing. Without secrets, I can think for myself and say what is on my mind. This is beginning to include my own self-care. It’s no secret that I have struggled with this. Much of my life has been driven by guilt about doing things for myself. And depression supports guilt and rewards unhelpful thinking with more unhelpful thinking.

I hadn’t thought that Wellbutrin could make such a difference in my attitude and my energy level.

READ: Is it working yet? Doing the drugs part IV

But thankfully, it has. Going back to my Psychiatrist next week, I will be able to share my success. I will not keep anything that I have felt secret. And I feel confident that I will not revert to concealed depression when we are discussing my progress.

It has been 14 months since I was in the hospital facing my diagnosis of major depressive disorder.

And it has been several years since I have felt like my old self. This is a momentous occasion, worthy of celebration. Depression is trying to tell me that this is a fluke, a one off, and that tomorrow, or even later today I will once again be circling the drain.

But I have 3 weeks of Wellbutrin on my side.

Just don’t tell that to my depression. It’s a secret.

The post I Have Fewer Secrets Taking Wellbutrin – Doing the Drugs Part V appeared first on My Concealed Depression.

This post first appeared on Depression Is Not My Boss, please read the originial post: here
People also like
10 of the best places to visit in Portugal
Dead Ends in Cryptanalysis #2: Timing Side-Channels
What Is the Worst Credit Score?
An Officer and a Spy
Cabbage Production Guide
“The Friend Who May Not Seem a Friend” – The Cat and the Fire, Post 2 of 3
Music Profile: Elliott Waits For No One - Alternative Rock Band - Illinois, Usa | SRL Networks London Music PR
Top Eco-Friendly Alternatives