Here is my recipe for Ham and Bean Soup. 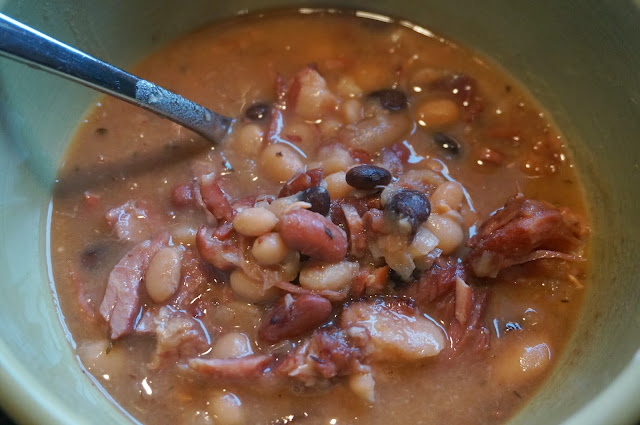 You will need:
5 cups dried Beans (this can be all one kind or an assortment)
Water (in which to soak the beans)
8 cups of water (for cooking)
Left over ham including ham bone (if you have it)

Best Low Acid Coffees That Won’t Upse…
The Increasing Popularity Of Curbside…
Cat Coronavirus Diary – Day 5
1 cup chopped onion
2 cloves garlic, minced
2 tsp salt
pepper
1 tsp thyme
Optional - 1-2 Tablespoons hot sauce
Step one: put your dried beans in a colander and pick out any discolored, cracked, or damaged beans.  Also look out for any rocks or other foreign matter.
Step two: rinse off your beans.  Remember beans are dried plant seeds.  In many places they are dried out in the open field then dusted off for packaging.  They usually have not been pre-rinsed before packaging because that would require another period of drying.  Trust me, unless you grew and dried the beans yourself (which we do for some beans), rinse the beans off.
Below they are all rinsed and mixed together.  I just thought it was a really pretty combination so I added the picture.
Step three: soak your beans overnight.  Put the rinsed beans into a large cooking pot and cover with at least 10 cups of water.  You may be surprised with how much water the beans will adsorb over night.  The pre-soaking cuts down on the cook time.  And yes you can use a pressure cooker to cut down on the cook time too but I do not like to use mine unless I am canning something (personal choice).
Put a lid on the pan and let it sit out on the counter overnight.
In the morning the soaked beans will look like the picture above.  The water is now cloudy and murky and the beans have swelled up and changed color.  Drain the beans into a colander into the sink.
Here is what the soaked beans look like up close.  Funny how the Great Northern Beans are now blue, the small red beans are now orange and the black beans are now red.  The Navy beans are still white.  Go figure.
Return the beans to the soaking pot and add 1 cup chopped onion and two cloves of garlic, minced.  Then add your ham.  In the picture above I put in the ham bone which still has a lot of meat on it.  Cooking the bone in the soup makes the soup so much more nutritious.
I then added some additional ham (probably about 3 cups worth but use what you have), 2-3 teaspoons of salt (I don't measure and the beans need salt), a few grinds of pepper, and a couple of teaspoons of dried thyme.  To all this I added 8 cups of water.  The pot was covered and put on the stove to boil.  Once boiling, the pot was stirred and the heat reduced to a gentle simmer.

Let the soup cook a few hours.  How long depends first on when the beans are cooked through and soft. How long also depends on whether you want the soup to have whole beans and a liquid broth, or if you want a thicker soup with the beans having melted to a velvet consistency.  I go for the second option, cooking the beans until they fall apart because my family likes this texture from the soup better than the whole beans in broth.  But there is no correct way.

Once the soup is done to your liking, remove the ham bones.  For most hams there will be two bones.  You may also find some other ham parts you want to remove as well.  Add the hot sauce if using.  If you do not want to use hot sauce but think the soup is a bit flat, add 1/4 apple cider vinegar or lemon juice, but add it one tablespoon at a time and taste between additions.