By Neelesh Gharmalkar (Pictured above: Jitendra Alase, proprietor of O-Fresh, Pune, operates the MahaOrganic stall at the farmers’ markets in Pune)

Even before vendors at the weekly farmers’ Market in Balewadi in suburban Pune have set up their displays, a growing band of eager customers can be spotted queuing up at the MahaOrganic stall, which sells only fresh Organic produce cultivated by local growers. They want in before the stock gets over. 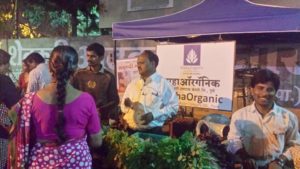 “Our priority is to buy Organic Produce first lest it get over. Then only do we head over to the regular veggie vendors for our remaining needs,” says Pune resident Anita, who finds herself jammed in the line for organic fruits and vegetables once every week. One Mrs Goswami, another resident, has been a regular since the market started in 2015, and travels a substantial distance each week to reach the organic produce stall. “It’s worth the trouble. Having lived abroad for several years, I understand the value of safe food and have been looking for it ever since my return to India,” she chimes in.

It’s been a year since the Maharashtra State Agriculture Marketing Board (MSAMB) decided to help organic farmers sell their produce directly to consumers through weekly farmers’ markets organised in various parts of the city—a concept consumers have embraced in throngs. Producer company, Swami Samarth Shetkari Utpadak (SSSU), was handed over the responsibility of organising these markets by the Chief Minister of Maharashtra, Devendra Fadnavis. Steered by its chairman, Narendra Pawar, who is aided by his competent team of young agripreneurs, SSSU is operating the farmers’ market once a week (every Wednesday, Thursday and Friday respectively) in three different areas of Pune, Balewadi being one.

Jitendra Alase, who mans the MahaOrganic stalls at all three locations, says customers are not only urban and educated. “It’s not just the urban educated who buy organic vegetables from us but also the labour class women (sic), who visit the stalls later in the evenings and are repeat customers for us,” says he. Also proprietor of O-Fresh, an aggregator of organic vegetables, Alase emphasises, by dint of its better quality, no one, not even the labourers, bargain over prices of organic produce, which are marginally higher than non organic produce. “This is the real success of the organic markets in Pune,” says he.

“Though a lot of the produce sold at these markets is conventional, companies such as MahaOrganic, O-Fresh, Veg Mart and Sendriya Bhoomi are offering authentic organic-only options and consumers are lapping them up,” says Pawar. All three companies aggregate organic produce from local farmers, providing organic food to the public while also offering market linkage to farmers, who lack market savvy and reach.

Vasudhatai Sardar, director of MahaOrganic Producer Company Ltd, and recipient of the Krishi Bhushan award by Government of Maharashtra, opines merely growing organic is not satisfactory but also the value chain needs to be transparent and consumers need to know where the produce came from. “The entire value chain and its integrity need to be developed,” she says.

Despite being in the minority, this handful of aggregators has met with great success as is evident by the long lines they strive to cater, as well as, the small window of time it takes to put up the ‘Sold Out’ sign. Not only are they fulfilling the organic fruit and vegetable demands of city dwellers but also they are gradually nudging consumer attention towards what is good and organic and why it is good for them. “A lot still needs to be done but we have certainly come a long way—from setting up stalls and waiting for customers— to customers waiting for us to set up stalls!” says Sardar.

Yet, for the organic movement to reach full bloom in Pune, there is a strong and pressing need for voluminous consumer education—be it about the numerous health benefits of consuming organic fare, the integrity (certification) of the produce, farmer support, or awareness of environmental protection that one supports by choosing organic. Ashok Patil, proprietor of Veg Mart, has done everything he can to further the cause, from creating jingles for the local radio station to advertising on local buses to promote word organics.

Although the farmers’ markets run by the SSSU constitute both organic and non organic vendors currently, Dr Bhaskarrao Patil, director, MSAMB, believes a dedicated Pune organic farmers’ markets in the future may not be a distant dream.

The author has been studying the evolution of the organic movement in India for 15 years and is director of Greencert Biosolutions Private Limited, Pune