Almost all organisms build their proteins by combining 20 different Amino Acids. In order to add new amino acids to this combination, scientists have redesigned genes and other protein-building tools to produce proteins with unique chemical properties that are very helpful for the manufacture of drugs. However, this kind of research is time-consuming and laborious, and usually, only one new amino acid can be added at a time.

Biofinder could detect signs of extra…
How to Take Proper Care of Your Teeth
24 Two Strand Twists for Men: Coolest…
iHerb – Save on California Gold Nutri…
GIAZO® (balsalazide disodium) tablets

Now, researchers are opening the floodgates to do more. They recently reported that extensive rewriting of a bacterial genome allowed them to add many new amino acids to a protein. This work may open up a new way for the synthesis of antibiotics and anti-tumor drugs. The related research results are published in the journal Science with the title of “sense code reattachment enables virtual resistance and encoded polymer synthesis”.

Chang Liu, a synthetic biologist at the University of California, Irvine, said he was very impressed by the paper, which is an important milestone in the redesign of the genetic code.

This new effort has been going on for decades. One of the early ways to construct a designer protein is to commandeer the cellular components that make proteins and insert them into Unnatural Amino Acids. When cells make proteins, the bases A, C, G, and T that make up the DNA code are first copied into RNA (where U replaces T). RNA is interpreted as a series of three-letter words (called codons), most of which encode one of the 20 natural amino acids inserted into proteins. However, because there are 64 codons, there is duplication: for example, six codons encode an amino acid called serine. The three codons do not encode amino acids, instead, they instruct cells to stop building proteins.

Initially, the researchers added an unnatural amino acid when the cell molecular machine saw a specific stop codon. Jason chin, a synthetic biologist at the molecular biology laboratory of the Medical Research Council in the UK, said that although the method has become more complex, it usually only inserts one amino acid for each protein. 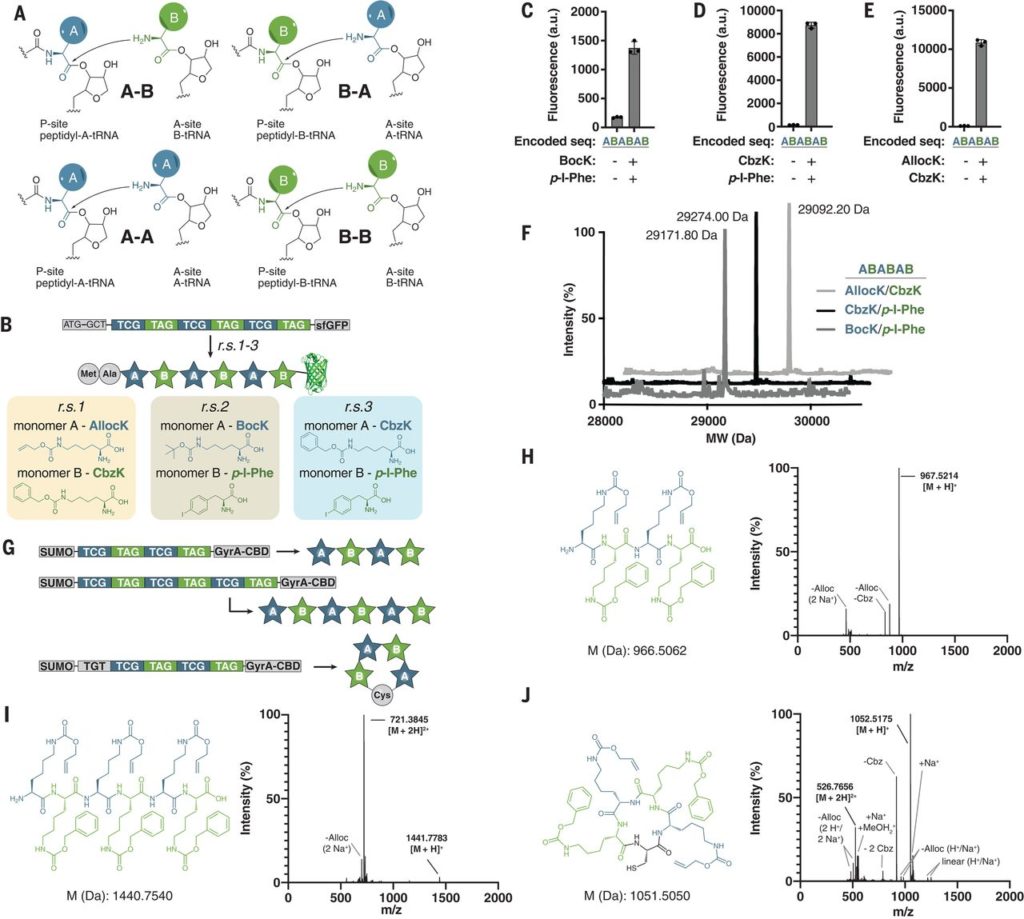 In the hope of adding more amino acids, Chin and his colleagues tried to reuse two of the six codons that normally encode serine. In a study in 2019, they used a crispr-cas9 gene-editing tool to construct an E. coli strain called Syn61 (nature, 2019, doi:10.1038/s41586-019-1192-5). To make it, they replaced more than 18000 serine codons in the bacteria’s four million base genome. They replaced UCG, UCA, and UAG with their synonymous codons AGC, AGU, and UAA, respectively. This means that serine will still be inserted into the correct position of the protein in the extension of E. coli strain Syn61. But the UCG, UCA, and UAG codons are now virtually “blank” and no longer encode anything in the protein, so they can be reused.

This reuse is exactly what Chin and his colleagues are doing now. By studying the E. coli strain Syn61, they knocked out the gene encoding the transfer RNA (tRNA) that recognizes UGC and UCA and inserted serine into the extended protein. They also removed chemical compounds that respond to the UAG stop codon and shut down protein synthesis. They then added back the genes that encode the new tRNA, which inserts unnatural amino acids whenever they encounter UGC, UCA, or UAG. Finally, they add these codons to the genome where they want unnatural amino acids to appear. They report that this allows them to add three unnatural amino acids to one protein at a time. They can also add multiple copies of each unnatural amino acid to each protein.

Abhishek Chatterjee, a synthetic biologist at Boston College in the United States, said that it did have a huge impact. These changes allowed Chin and his colleagues to concatenate these new amino acids into a series of ring structures very similar to those of existing antibiotics and antitumor drugs. Since there are dozens of different unnatural amino acids to choose from, countless combinations may be inserted in this way. Chatterjee said it opened the door to creating a huge library of potential new drugs. Chin added that the researchers could also extend the strategy by reusing other redundant codons and adding more new amino acids and more types of chemicals to the mix.

Perhaps equally interesting, Liu said, is what large-scale genomic changes mean for viruses that usually infect E. coli. In 2013, researchers reported that redesigning the stop codon of E. coli could destroy the replication ability of the virus. This happens because viruses rely on the natural codons of E. coli to make functional proteins. This strategy is not infallible in preventing virus infection, because stop codons do not appear frequently, and some viruses can evolve around these changes.

But viruses usually need to add a lot of serine to each protein. Since the gene-modified strain Syn61 does not insert serine when its protein construction machine reads UCG or UCA codons, the virus cannot make Syn61 synthesize functional viral proteins, thus preventing their proliferation in bacterial cells. Liu says this looks much more robust than the earlier approach.