You’ve heard it and have probably said it too – Lightning does not strike in the same place twice. Well, the fact is, it does and can hit the same spot twice – at least records show that the Empire State building is struck an average of 23 times every year.

Humanity has always been fascinated by the immense beauty and the raw power of nature; thunderstorm and lightning inclusive; while at the same time acknowledging the inherent danger they pose.

According to weather.gov, over 2000 estimated thunderstorms occur globally at any given instant; producing about 100 cloud-to-ground strikes every second.

It is devastating with several records of deaths both to humans and animals, triggering wildfires, destruction of properties and trees, and even disruption of power supply to tens and hundreds of thousands of homes.

A report by NWS office of meteorology notes that over the past 30 years, thunderstorms rank second behind flash floods as the leading cause of weather-related deaths in America.

So, to help you gain a deeper understanding about this natural phenomenon, we’ll be examining what lightning is, take a dive into the different lightning colors, and wrap it up with some fun facts.

It’s a natural phenomenon that occurs suddenly with the discharge of electrical charges for a short duration. It occurs typically during a thunderstorm – though dust storms, forest fires, tornadoes, volcanic eruptions, etc. can also lead to lightning – between a cloud and ground known as the cloud-to-ground bolt, within a cloud known as intra-lightning or between clouds. The speed of a lightning can be split in two: the speed of the leader and the speed of the returning stroke, which are 61 km/s and 27800 km/s, compared to the speed of light, which is 299792 km/s.

How does lightning form?

The processes involved in the formation are not entirely known, hence, leaving some rooms for guesswork. However, some well-known physical conditions must be present for it to occur.

The crucial elements that must be present are cold air and warm air. 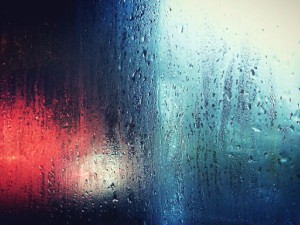 Warm air near the surface of the ground is pulled up in an upward draft laden with moisture; as they rise into the atmosphere, they get cooled due to a drop in temperature; thus introducing millions of water and ice molecules into the atmosphere which form clouds. 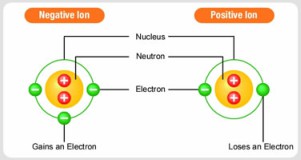 As the warm air moves upwards, they collide with the cold air which has ice crystals. These collisions strip the molecules of their electrons; hence forming positive and negative ions.

Think of this process as the rubbing of a balloon on the skin which generates electrostatic current but in this case, at a larger scale.

In the clouds, the positively charged ions move upwards while the Negative Charges are flushed downwards. The cycle repeats until there’s a massive buildup of electric charge. 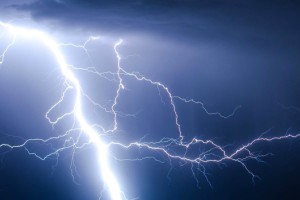 Once the cloud has accumulated enough charges; the negative charges below the clouds attract the positive charges, and energy is released.

Other times, it is between two clouds resulting in inter-cloud lightning. This attraction may occur several times until all negative charges are discharged from the bottom of the cloud. 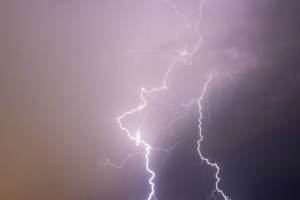 It’s usually accompanied by thunder. Due to the sudden heating and expansion of air around it and it causes a shock wave we hear as thunder.

One can quickly calculate how far away a thunderstorm is by counting how long it takes to hear the thunder after seeing it.

Its differentiated based on where they occur.

What color is lightning?

The bolts come in a variety of colors – white (which is the most common); orange; blue; lilac; yellow; violet; sometimes green; red; and cyan. It can take any color in the full spectrum of the rainbow ranging from red which is in the infrared band to violet in the ultraviolet region.

It primarily appear white, however, in certain weather conditions; one can observe some tinges of other colors at the edges. So humidity, particles in the atmosphere including environmental conditions all contribute to determining what color a bolt would take.

The temperature of it also affects what color we see. The hotter it is, the closer to the end of the spectrum the color is. Its temperature can get as high as 50,000 degrees Fahrenheit which is hotter than the heat on the sun’s surface.

Also, the distance between the bolt and the observer can impact what they see. As the rays of it travel through the atmosphere to the observer, it gets scattered by tiny dust particles in the air which make it take on different colors.

There’s also the possibility that, the air’s composition affects how a bolt flashes. Take for instance, oxygen and nitrogen molecules in the air are so tiny that they tend to scatter light rays with short wavelengths.

What each lightning colors mean

The colors can provide insight into what to expect during a thunderstorm:

A bolt is a high-energy electrostatic discharge from the clouds due to the buildup of electric charges. Dust, moisture, temperature and air composition all impact the color of the flash.

The post What Color is Lightning? appeared first on UV Hero.

This post first appeared on UV Hero, please read the originial post: here
People also like
Justin 99 – cloud 9
Statement from Agriculture Secretary Tom Vilsack on 2022 Public Charge Final Rule
How to be Happy and Positive All of the Time
The Best Games to Play on Amazon Luna
Tickets For the Bronx Zoo
Man United's American suitors Apollo are accused of financial connections to Putin's wealth fund
6 Brainy Ways to Proceed When You Owe IRS Back Taxes
Octopus-inspired glove grabs underwater objects using LIDAR