Vitamin K refers to a group of fat-soluble vitamins that play a role in blood clotting. It also helps your body make proteins for healthy bones and tissues.

Vitamin K is produced in our bodies by gut bacteria.

Two natural forms of this vitamin exist - vitamin K1 and vitamin K2. Vitamin K1, also called phylloquinone, is produced in plants. It is the main type of dietary vitamin K.

Vitamin K2, which is the main form stored in animals, has a number of subtypes referred to as menaquinones.

Vitamin K3, K4, and K5 are the synthetic forms (made artificially) of vitamin K.

The Story Behind Vitamin K

A Danish scientist, Henrik Dam, aimed to study the effects of low cholesterol (fat-like substance present in the body) levels in the body, in 1929. He examined chickens that were fed a diet low in cholesterol.

After a few weeks, the chickens started developing hemorrhages (bleeding inside the body). However, restoring the cholesterol in their diets did not seem to reverse this.

It was then learned that another compound had been extracted from the food along with the cholesterol. That compound was the coagulation vitamin, which was described as vitamin K because it was first reported in a German journal as “Koagulations vitamin.”

It was only much later in 1974 that the exact function of vitamin K in the body was discovered.

The Significance of Vitamin K

During pregnancy, vitamin K does not cross the placenta (tissue that develops in the womb during pregnancy) to reach the developing baby, and the gut does not have any bacteria to make vitamin K before birth. After birth, vitamin K in breast milk is also not adequate enough.

Thus, vitamin K is administered to the baby at birth using either of the following ways:

So far, vitamin K administration to the newborns has not resulted in any noticeable side effects.

Most of the diets followed in the United States contain an adequate amount of vitamin K. Thus, reports of vitamin K deficiency in adults are very rare.

VKROC1 gene is located on the short or p-arm of chromosome 16. 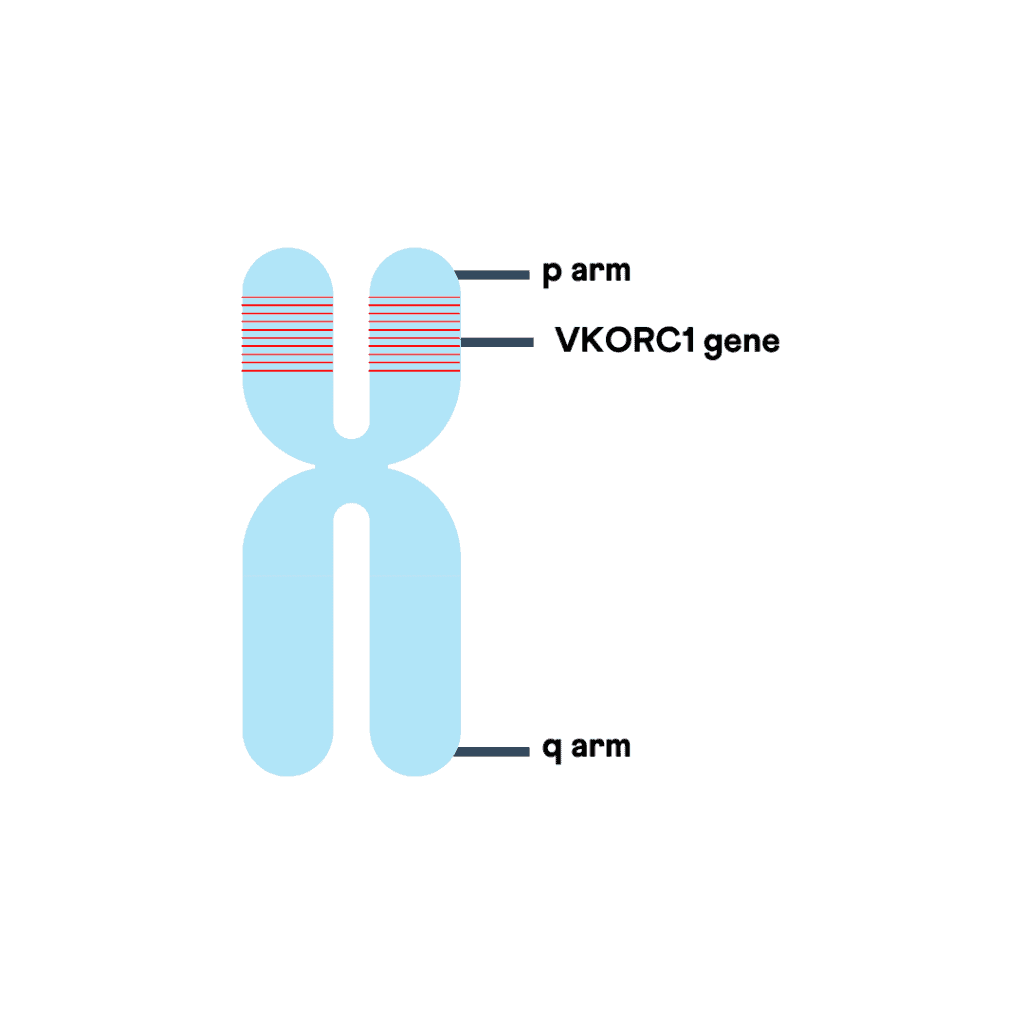 The VKORC1 gene plays a vital role in the vitamin K cycle. The gene produces the enzyme (vitamin K epoxide) reductase that converts vitamin K to another form (from vitamin K epoxide to vitamin K) that is required for the blood clotting process.

Warfarin usage can interfere with this conversion. Warfarin is a blood thinner that is prescribed to treat blood clots and is advised for people with a high risk for stroke or heart diseases.

Since warfarin is a blood thinner (doing the opposite of what vitamin K does), it tends to inhibit the activity of the VKROC1 gene. This results in reduced vitamin K levels that can hamper the functioning of various blood clotting proteins.

rs9923231 The SNP rs9923231 can alter the activity of the enzyme vitamin K epoxide reductase. The C allele shows enhanced enzyme activity compared to the T allele, and thereby increases the availability of active vitamin K. The T allele, on the other hand, results in lower enzyme levels, and therefore less active clotting factors.

The GGCX gene is located on the p arm of chromosome 2. 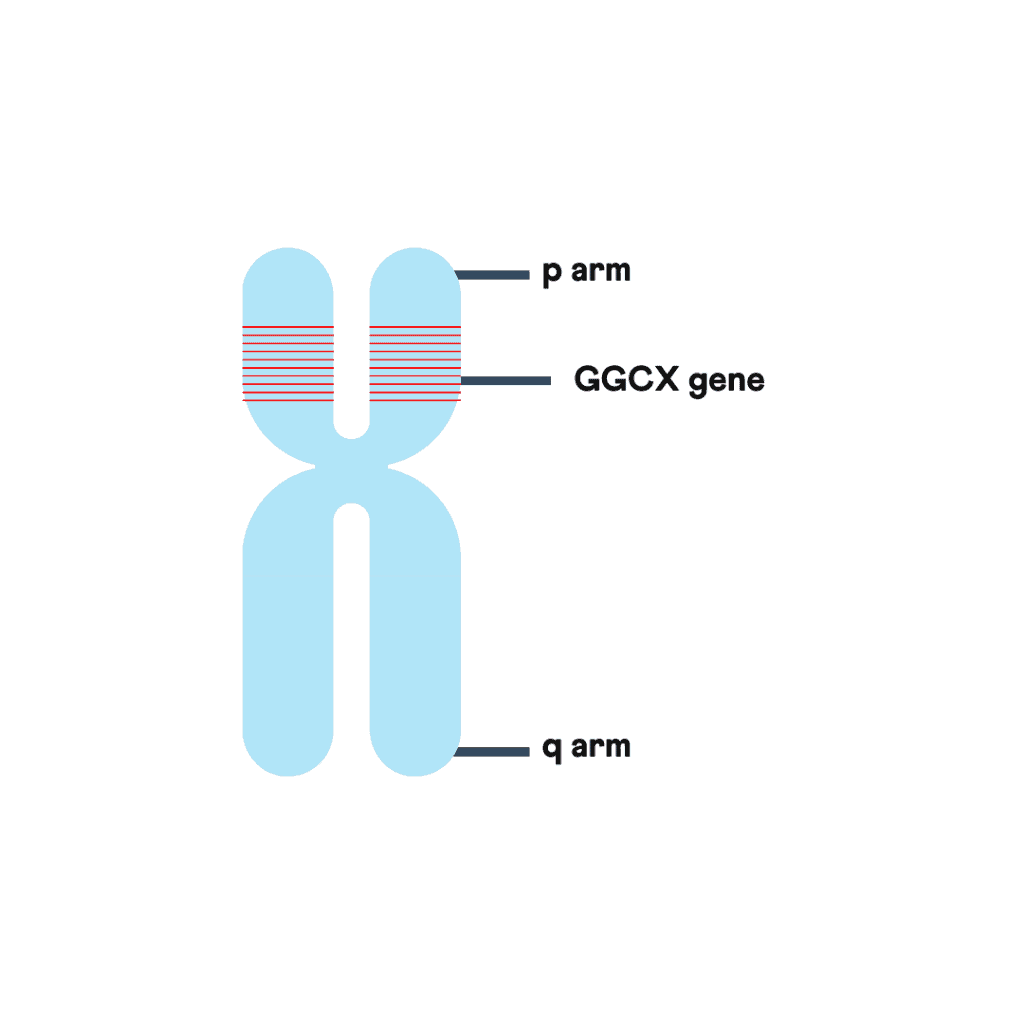 It produces the enzyme Gamma-glutamyl carboxylase. This enzyme helps in the modification of several vitamin K-dependent proteins that are involved in blood clotting.

The SNP rs699664 influences the activity of the enzyme gamma-glutamyl carboxylase. The G allele produces a protein that is less active than the A allele. This results in lower levels of vitamin K which may lead to blood clotting issues.

What Happens When You Have Vitamin K Deficiency

Vitamin K deficiency can be very dangerous, as it could result in uncontrolled bleeding - which is the primary symptom.

What Happens When You Take Excess Vitamin K?

Vitamin K toxicity is extremely rare. The natural forms of vitamin K (K1 and K2) don’t cause toxicity even when consumed in large quantities.

However, a synthetic form of vitamin K - vitamin K3 - is associated with toxicity and should not be used to treat vitamin K deficiency. K3 interferes with the body’s natural antioxidants which can result in cell damage. In infants, the toxicity manifests as jaundice and can result in hemolytic anemia (where the red blood cells are destroyed faster than they are produced) in adults.

What Are The Foods Rich In Vitamin K?

Vitamin K deficiency is easily treatable using the drug phytonadione, which is essentially vitamin K1, that is given orally or subcutaneously (skin). The dosage for the drug varies based on the age, gender, and requirement of each patient. However, the best way to ensure you get the optimum recommended amount of vitamin K is through diet.

You must get your daily dose of green vegetables as they are natural sources and contain large amounts of vitamin K. These include:

Other sources of vitamin K include

Vitamin K is a fat-soluble vitamin that plays a major role in blood clotting. It is also essential for regulating blood calcium levels. Most newborns are born vitamin K deficient as this vitamin cannot cross the placenta. Hence, vitamin K needs to be administered either orally or through injection after birth. Though vitamin K deficiency in adults is pretty rare, it can potentially be life-threatening as it could lead to uncontrolled bleeding.  Certain genetic types can put you at a risk for vitamin K deficiency, especially when on anticoagulants like warfarin. Vitamin K1 injections and oral supplements can bring vitamin K levels back to normal. However, in order to continually maintain adequate levels of vitamin K, dietary sources are the way to go!