Two new studies have found that the Transcendental Meditation technique is an effective approach to reducing the symptoms of depression. The studies were presented at the 31st Annual Meeting of the Society of Behavioral Medicine in Seattle, Washington. 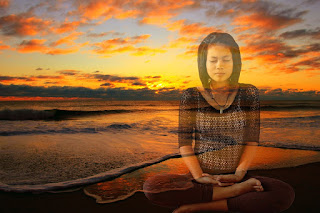 Image Source
The research was conducted at Charles Drew University in Los Angeles and University of Hawaii in Kohala. It included African Americans and Native Hawaiians, 55 years and older, who were at risk for cardiovascular disease. Participants were randomly assigned to the Transcendental Meditation program or a health education control group, and assessed with a standard test for depression over 9-12 months.
Participants in both Studies who practiced the TM technique showed significant reductions in depressive symptoms compared to the control subjects. The largest decreases were found in those participants who had indications of clinically significant depression, with those in the TM group showing an average reduction in depressive symptoms of 48%.
“These results are encouraging and provide support for testing the efficacy of Transcendental Meditation as a therapeutic adjunct in the treatment of clinical depression,” said Hector Myers, PhD, study co-author and professor and director of Clinical Training in the Department of Psychology at U.C.L.A.
The results of these studies are timely. For older Americans, depression is a particularly debilitating disease, with approximately 20% suffering from some form of depression.
The studies were funded by grants from the National Institutes of Health – National Heart Lung and Blood Institute and the National Center for Complementary and Alternative Medicine.
How depression is impacting our society:
• Overall, 12.4 million women and 6.4 million men suffer from depression in the United States.
• Depression is a major risk factor for cardiovascular disease, with even a moderate level of depressive symptoms associated with increased cardiac events.
• Research has also determined that depression in the workplace and in medical care costs amounts to $83.1 billion per year.
This graph shows the reduced symptoms of depression through Transcendental Meditation in older adults at risk for CVD compared to subjects participating in health education. All subjects were randomly assigned to either participate in the TM program or in health education.
Source: Free Articles  from ArticlesFactory.com
ABOUT THE AUTHOR
Mario Orsatti is the director of special projects for the David Lynch Foundation for Consciousness-Based Education and World Peace. He has been an active teacher of the Transcendental Meditation technique since 1973.
http://www.tm.org/blog/meet-the-bloggers/#orsatti
If you liked this blog, please leave a comment and share. Also come join us on Facebook
>