The winner of men’s HM was a Mr. Kareem (did I spell it correctly?) from France. Without even attempting to be one, SoleFest, in the first edition itself, had turned International!! We have always known Rajesh Tiwari as a speedster of distance running. At SoleFest, his sister-in-law announced herself as one too by getting a podium finish. The Dr’s Kamat kept things predictable by each winning a prize. Dr. Nagesh K revealed that this was the first ever podium finish for him. He would finally have looked the Mrs. (an "Ironwoman") in the eye after an event!! Rajinder Singh, who missed out the podium at VIM by one position, got one here. And when they announced the 3rd place in women’s HM, I wondered who this Anita Rawat was. This one was a new name, till the wife exclaimed & I realized who it was. The two ladies began running less than 3 months back & had finished 3rd & 4that SoleFest!! (But I am too modest to take credit for initiating them into running & guiding them through the course.)
But, as they say, Drama abhi baaki hai mere dost. It turned out that Shital Pawar should have been on stage receiving the prize. This was conveyed to the concerned & upon checking the data, the mistake was graciously (& publicly) accepted. Same thing happened in one of the women’s categories too. With timing chips & mats the next edition onward, this was the last time such an error was taking place.

We had also arranged a couple of Fine Arts students to sketch portraits of the winners after the event. Though not all availed this, I am sure this will be another reason (apart from the unlimited puri-bhaji) for they coming back to the next edition of SoleFest.
Bringing this post to a close, I would sum up the first edition of SoleFest as one where a lot of things went right & a few that could have been better. “Comrade” Vandana Parekh (was this really the 1st event she has run in Baroda?), while accepting her prize, was all praise for the manner the event was conducted. Coming from someone who has run all over the world, one would obviously not disagree with her, including the one suggestion she had. I am sure, Himanshu & Dr. Neha would find a trophy featuring a female runner next time.
Considering the cause being promoted by the event (Organ Donation) & that the event itself was promoted by two hospitals (HCG & Spandan), the medal paid its due homage to this noble profession. (Thanks to Sameer for the suggestion.) SoleFest will return & get much more than the over 100 organ donation pledges we received this time. 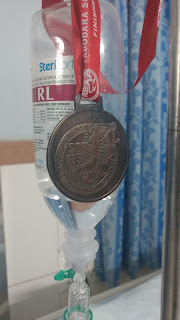