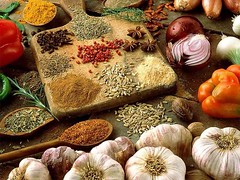 Today, there are varieties of anti-inflammatory drugs available in the market. They promise to ease our pain and calm angry allergic reactions. While they may provide quick relief but long-term use of some anti-inflammatory medications can weaken our immune system or cause unwanted side effects. Nature has provided many anti-inflammatory foods that not only work with negligible adverse reaction, but also provide us a great tasting. In addition, it can reduce inflammation, as well provides us plenty of vitamins and minerals that increase our immune health.

Whenever we flavor our meals with herbs or spices, it becomes supercharged foods without adding a single calorie. It transforms the regular food into something truly unique superficial taste, which is good for our body, just by adding herbs and spices to meals.

There are various herbs and spices that consist of a wide variety of some of the most effective antioxidants of any food. In fact, lots of herbs and spices have the even wider range of antioxidant, some spices like cloves, turmeric; cinnamon has up to 10-50x more antioxidants ORAC value (a weight comparison weight) compared with cranberries.

Benefit of Antioxidants to Health

1.It Boost Metabolism along with Fat Burns :  Many herbs and spices are thermogenic, which means that naturally help boost metabolism, partly because they are very rich in nutrients.

2.It Helps to  stabilize blood sugar :  A number of spices are good for controlling Blood Sugar and insulin control. Some are even good as some of the diabetes medications. When the blood sugar is well managed, you are more likely to store fat and burn calories result might be not as overweight.

3.It works as Anti-inflammatory Agent : Powerful Scientific studies show that herbs and spices can actually work as well or better than some drugs in soothing inflammation without the negative side effects of individual drugs.

4.It works as Anti-bacterial- anti-viral and anti-fungal Agent :  Many herbs and spices contain properties which actually kill dangerous pathogens such as viruses, bacteria and fungi resistant. The natural properties of these foods work against many microbes that are resistant to conventional drugs.

1.Turmeric (हल्दी ) : yellow-orange pigment in turmeric known as curcumin is  the main active ingredient in this super spic. Curcumin’s anti-inflammatory benefits are really comparable to many drugs available in market. But, unlike drugs, curcumin is not toxic at all.Curcumin is more effective  in the Alzheimer’s disease other that of drugs, because it reduces the oxidation and inflammation in the brain.

2.Ginger (अदरक) : Ginger is very powerful spice for your health in many ways. Ginger contains more than 25 different antioxidants, that makes it very effective in fighting free radicals in our bodily systems. Ginger is also known for its ability to reduce nausea and vomiting and motion sickness.

In the studies it have been found that  ginger are more effective than the common drugs available in the  a market used for motion sickness. As ginger has no harmful side effects like many drugs, it is very good for morning sickness. Studies show that only 1 gram of ginger before surgery is more effective than standard anti-nausea medication given for nausea and vomiting after surgery.

Ginger is also a soothing remedy for sore throats, colds and flu, because of its antiviral properties. Ginger also beneficial in  coughs and is an effective expect-orator. Try a tea made with hot water to a simmer with a few slices of ginger and a small amount of honey and lemon for a soothing tonic when you are sick.

Ginger have a strong anti-inflammatory, properties that helps to reduce pain and inflammation of arthritis and muscle aches. Ginger also removes cholesterol and avoids blood clots that may lead to strokes or heart disease.

3.Basil (तुलसी): Basil is an herb with outstanding therapeutic with very effective anti-inflammatory properties that work for arthritis, allergies and inflammatory bowel disease. Besides basil also helps to kill harmful bacteria that cause food poisoning, including Staphylococcus Listeria and  Escherichia coli O157:H7.

Basil is also a prime source of beta carotene, a powerful antioxidant that prevents free- damage.Free- damage is a main reason of heart disease, cancer and various other serious health conditions and maturing. Since its dark-green color, that is an excellent source of vitamin K, calcium and magnesium, which is excellent for the bones.

It in addition is a great source of iron, manganese, vitamin C and potassium. One can use both dried and fresh basil and  in food freely to maximize its health benefits.

4.Cinnamon (दालचीनी) :  This spice has one of the strongest antioxidant levels than any other spice. Cinnamon is highly effective, for diabetes (type1 and type 2 ) it helped to stabilize blood sugar levels within the blood. In a study, it was found that the person with type two diabetes, if taken two teaspoons, a day can reduce blood sugar up to 20-30%, and also reduces the levels of LDL cholesterol as well as triglycerides.

Cinnamon besides has powerful anti-inflammatory properties, that help to soothe pain and stiffness in muscles and joints, such as arthritis. Cinnamon has a positive impact on brain function, the smells of the cinnamon or chewing cinnamon-flavored gum may help to improve memory and concentration.

Cinnamon also reduces inflammation of the blood vessels leading to coronary artery disease and heart disease it also has anti-fungal and antibacterial properties.

5.Thyme (अजवायन के फूल): The active ingredients thyme is known as for the healing of bronchitis, sore throat, chest congestion, laryngitis and asthma. Thyme is effective in treatment of inflammanation and mouthwashes it is often used as an ingredient in cough drops and mouthwashes.

An study on thyme shows that it increases the amount of DHA (that is an important ingredient of omega-3 fatty acids acids) in the cells within the brain, heart and kidney.

6.Cumin (जीरा) : Cumin is another spice that has high antioxidant’s properties.It is also known for good digestion, especially. It motivates the gallbladder and pancreas to cover up enzymes and gall that break down food into usable nutrients your body can use.

Cumin also helps detoxify the body, and is very effective for respiratory disorders like asthma and bronchitis. Cinnamon can also help to maintain levels of blood sugar to be stable, that means it is best for diabetics or pre-diabetics, and there are fewer chances of weight gain and excess body fat.

It has been studied that Cumin have shown to work as well as some diabetic drugs generally used to regulate insulin and glycogen. Cumin also has a very good source of iron, vitamin C and vitamin A, which is good for the immune system.

7. Cayenne ( लाल मिर्च) :  This hot spice dish not only heats the body but also increases’s body metabolism, helping to burn fat faster. And research study proved that when a person eats an appetizer with red pepper flakes, they eat 15% less food than others.

Cayenne is a very productive remedy as anti-inflammatory and an excellent painkiller everything from headaches to arthritis, muscle aches, clearing nasal congestion and strengthen the immune system. You must try pepper on your eggs in the morning, in soups, meatloaf as little spice increase metabolism.