Why #blacklivesmatter MATTERS to Asians 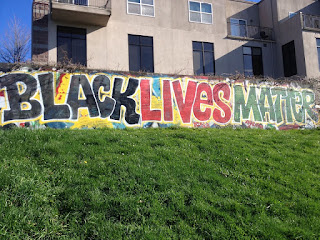 The other day, I decided to log onto Facebook to see what my friends and family were updating on social media. This was the day after Alton Sterling was fatally shot by two of the city's policemen. And unfortunately, a majority of my peers were not focused on trying to stop police brutality, nor the injustice that had occurred. Instead, my newsfeed was filled with people arguing whether the phrase should be #blacklivesmatter or #alllivesmatter.
One of which, was a comment written by an Asian-American woman who stated how she refused to support the #blacklivesmatter Movement since it did not include the Asian community. She discussed how Asian lives also mattered, and that the #blacklivesmatter movement needed inclusion. So that, was her reason for not being a part of the #blacklivesmatter movement. Because of the specific phrasing of #blacklivesmatter, the movement therefore did not matter to her.

Koan #6
Top (IAS) Civil Services Interview Qu…
Today I’m feeling like “what’s the po…
A Comparison of the Environmental Imp…
Being a (Goth) Black Sheep … and Brin…
I wish I were able to tell you that this reason only applied to this one woman. However, the unfortunate truth, is that many Asian-Americans believe that the #blacklivesmatter movement doesn't matter because it is a movement that does not include them.
And one of those Asian-Americans, used to be me.
Now, before you get mad, let me explain. In the same way, the term feminism is often looked down upon by men because they feel that it doesn't apply to them. Even though the entire feminism movement is about equality for everyone, men often feel as if the movement only applied to women. As an Asian-American woman, I had originally believed that the phrasing didn't include me. Even though the #blacklivesmatter concept was to bring about equality for everyone, I felt unsure that its meaning was that the lives of the Asian community also mattered. Through the phrasing alone, I didn't think it was directly fighting for equality for all. And I failed to see how #blacklivesmatter mattered to the Asian-American community.
Here's the thing- Yes, Asian-Americans face discrimination on a regular basis. But Asian-Americans are not the ones being targeted.
The problem with the #alllivesmatter movement, is that we are ignoring the fact that black lives have been the primary victims of police brutality. In the past year alone, the American police have killed more than 500 black lives alone. Black people are five times more likely to be killed than white people. And in most situations, they are unarmed, completely innocent individuals.
These statistics don't apply to Asian Americans.
The other day, I read a true story about a black man who was afraid that a policeman would flag him down because his car's license plate had expired. He was afraid of the possibility that a simple encounter with a policeman could end his life that day. But, for us, when a policeman flags us down the road, we are so fortunate to be able to think "I am going to get a ticket" rather than "My life is about to end". When we walk down the street, we are lucky to to be able to do so without preconceived stereotypes that we are dangerous criminals. And we are blessed that our first impressions do not include the word "threat" or "armed". However, our situation unfortunately doesn't apply to the lives of many black individuals. And hundreds of lives have been taken by the hands of corrupt policemen who incorrectly discriminate against innocent black lives.
But now, I understand, that
#blacklivesmatter is to highlight the injustice that black individuals face everyday.
#blacklivesmatter is fighting for equality for everyone.
so #blacklivesmatter does include Asian-Americans
When I see my fellow Asian-Americans explain that they do not have anything to do with the #blacklivesmatter movement, I can understand why they feel that way. But the thing is, the #blacklivesmatter movement also affects Asian-Americans.
How? Well, the core of the movement is to equalize all races. And the label is "black lives matter" because black people are the most adversely affected. What the movement is trying to do, is to fix the most affected area first- before police brutality expands to other races. It's similar to fire. If a house were to catch on fire, the firefighters would try to put out the fire in the house it started with, than to focus on the neighboring houses. In the same way, the #blacklivesmatter movement is trying to focus the problem on black lives before other minorities are affected by police brutality. If Asian-Americans continue to believe that this movement does not apply to them, they are in for a rude awakening. Because essentially, we could very well also be the target of police brutality if this problem is never fixed.
In addition, another common misconception is that this problem is one that will never be solved. In fact, one of my Asian-American friends expressed his concern that his main issue with the #blacklivesmatter movement is how there is no tangible solution. But, it's important for all of us to understand that awareness is always a good step forward. This is not an entirely blind movement, but it's the aspect of raising awareness before raising an answer.
Currently, there are more than 18,000,000 Asian-Americans in the United States today. And within the 18 million Asian-American individuals, I hope that they begin to voice their opinions louder than ever for the violence and cruelty within our country. I hope they begin to understand how #Blacklivesmatter allows us to take the first step towards finding the answer to ending this injustice. And how it is a movement that Asian-Americans especially need to be apart of.
Because #blacklivesmatter does matter to Asians.

Why #blacklivesmatter MATTERS to Asians