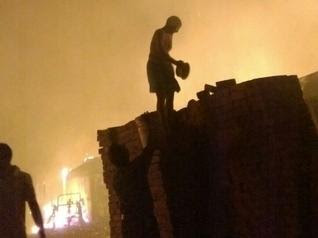 A Massive Fire Accident in the midnight hours that left  residents of Odai Kuppam in Besant Nagar totally gutted. An area located near to the Annai Velankani temple in Besant Nagar where more than 50 huts were shattered into flames leaving few injured.
The Fire control room recieved data about the accident around 12.15 a.m on Wednesday. A sum of eight putting out fire vehicles, from TNFRS stations including Teynampet, Guindy, Ashok Nagar and Saidapet were raced to the spot and struggled hard to put off the fire. After this incident , the number of residents affected were taken into record with assistance from various Government departments.
Later in the morning , DMK's Ma. Subramaniyan visited the place who had to see only the remains of burnt homes and consoled the affected. On explaining abut the incident He stated that , this massive Calamity occurred due to sudden burst of 20 cylinders and this has brought the people of Odai Kuppam to tears where they have lost all of their belongings such as Aadhar Card, Ration Cards, Students School Books, and many more valuable things.
The Corporation should make swift arrangements to relocate the bereft residents and give them proper aid . There must be a course of action from leading NGO's to give helping hand to the residents of Odai Kuppam.
For more Updates , Check this blog http://tigoister.blogspot.in/#
Below, you can find the raw footage of huts going down in flames shot by one of the residents