SPECIFICATIONS OF THE NEW BAJAJ DOMINAR 400 LAUNCHED IN INDIA 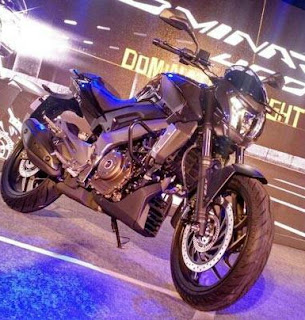 Moreover, the Dominar 400 engine will comply with the new BS IV emission norms and is the first motorcycle from Bajaj to come with a slipper clutch.

The Dominar 400 gets 43mm telescopic forks upfront and adjustable monoshock in the rear with a kerb weight of 182kg. Apart from this, the operating altitude of the Bajaj Dominar 400 is 0-18,380ft above sea level.

The new Dominar 400 will be feature loaded in all senses. It will come with Full LED headlamp with AHO, backlit switch gear, LED tail lamps and even slim LED indicators. The instrument panel will be all digital complete with tacho, speedo etc.

Bajaj has also done away with old school features like a kick starter and will feature specially designed MRF tyres. Moreover, the Dominar 400 will also get dual channel ABS.

The all new Bajaj Dominar 400 will compete against the likes of Mahindra Mojo and Royal Enfield Himalayan in India.

SPECIFICATIONS OF THE NEW BAJAJ DOMINAR 400 LAUNCHED IN INDIA