Gaylord Ravenal: Did My Grandfather Serve as Inspiration for This Showboat Character? 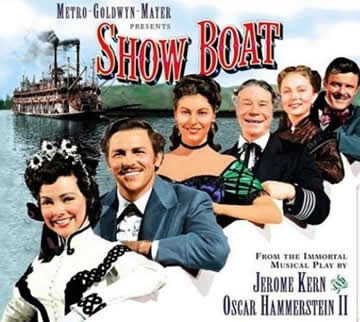 Stanger than fiction? There are circumstantial reasons to believe that the characters of Gaylord Ravenal and Magnolia Hawks in Edna Ferber’s novel “Showboat,” and in the subsequent Musical, were based on my grandfather Charles Gallaher and his first wife Grace Dennison. The character of of their daughter, Kim, though female, could also be based on my half-uncle Donald Gallaher.
Back in 2003, I had a one-on-one meeting with my musical theater writing teacher John at Theatre Building Chicago.  I presented him with three one-page synopses of ideas for musicals I had come up with, for which I hoped to write book and lyrics. One was about a family relative, Neysa McMein, an artist and member of the Algonquin Round Table; another, a children’s one-act musical, which I called “The Cat and the Kings,” based on an old Danish folk tale “Peter Humbug and the White Cat;” and lastly, a musical about the early Chicago jazz era called “Black and Tan,” which contained opening scenes set on a Mississippi showboat, with the remainder of the drama taking place in Chicago.

It’s Me – Chapter 11
Top 10 Sites to watch Telugu Movies O…
Sex Tips for Men: How to Be Better in…
Crunchyroll – How to Watch Anime Onli…
Podcasting
John wanted me to first pursue the children’s musical the coming year, but was also interested in my eventual development of the “Black and Tan” piece. He said he saw a lot of potential in it and many musical possibilities within the Story. Also, almost as an aside, he observed that it seemed rather “showboat-y.” At first, I thought he meant it might be too flamboyant or “in your face,” like someone who’s “showboating.” But it really isn’t that type of story. I quickly realized he meant it resembled the musical “Showboat.”
I was taken aback somewhat and felt a little embarrassed because, even though I attested to familiarity with most American musicals, I didn’t know anything about the musical “Showboat.” I didn’t know the Edna Ferber novel, and had never seen the musical version by Kern and Hammerstein that had the songs “Old Man River” and “Can’t Help Lovin’ That Man of Mine.” I didn’t tell the teacher of my ignorance, as most of my fellow students were well-versed in the majority of musicals from the late 1920s onward. Also, I was a little alarmed because I definitely did not have any intention to attempt rehashing a classic. I did not want to write a musical that was “like Showboat” and cared to change it if anyone would see a connection, or more accurately, a weak imitation.
I thought about my initial inspiration for “Black and Tan,” which was my own family and my continuing interest in the early jazz era of Chicago. My grandfather, Charles Gallaher,  had come from a Quincy, Illinois, family of newspaper people. Instead of following in family footsteps, he became a Mississippi river boat gambler and was dubbed the black sheep of the family back in Quincy. At age 26, he got a 16-year-old girl on the boat by the name of Grace Dennison pregnant, and married her in 1894. I have their marriage certificate. In 1895, their son Donald was born. The family moved to Chicago, where Charles got a straight job setting type at the Chicago Herald.
By the time son Donald reached age four, stage mom Grace had him cast in a play at Chicago’s Grand Opera House. One night, New York stage producer Charles Frohman was in the audience and determined the boy had talent. Soon enough, Grace and Charles’ marriage was a thing of the past, and Grace and son Donald moved to New York, where she signed a contract with Frohman. Donald soon became the highest paid juvenile actor on Broadway.
My story synopsis “Black and Tan” is very loosely based on these family characters. My grandfather’s character does not appear at all and the Grace Leyden character resembles Grace Dennison, who moved to Chicago, although the latter didn’t pursue a career as a jazz singer. And son Jimmy resembled Donald who fulfilled his dreams of filming and recording by directing a few early talkies, which he did later in his career. All the jazz connections and relationships that make up most of the story have nothing to do with my family.
I did a little research and found online synopses of both the novel and musical “Showboat.” I was amazed by what I discovered. As I said, my teacher had found my “Black and Tan” synopsis “Showboat-y.” But my family’s real story is so very “Showboat-y,” that I believe that it is in fact the basis for the actual “Showboat.”
Partial synopsis of the musical “Show Boat” as it appears on U. of Virginia website: Show Boat is the story of three generations of the Hawks family on the River Boat, The Cotton Blossom. The saga spans the period from the mid 1880's to the then current late 1920's, and follows the fortunes of Magnolia Hawks and her gambling husband Gaylord Ravenal. Magnolia, or "Noli," struggles throughout the story with her relationship to the Cotton Blossom, owned by her parents. In the second act of the book, Noli and Ravenal separate, and she leaves the familiar stage of the River Boat and the waters of the Mississippi for Chicago, and a future as a musical comedy star. Magnolia and Ravenal's daughter, Kim Ravenal, follows in her mother’s footsteps as an actress and performer. 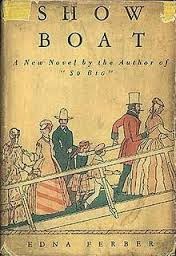 Partial synopsis of Edna Ferber's novel "Showboat" as it appears on amazon: The story concerns three generations of women: Parthenia Hawks, a ram-rod upright New Englander who heartily disapproves of her husband's decision to purchase a show boat and involve the family with actors, God forbid; her daughter Magnolia, whose fresh beauty eventually propels her fame as one of the most popular actresses on the river; and her granddaughter Kim, who becomes a Broadway star. But the backbone of the story concerns Magnolia's  ill-fated love for ne'er-do-well gambler Gaylord Ravenal, a love that tests her strength to the last degree.
Just as Magnolia has to change to meet her constantly shifting circumstances, so is the nation changing around her, gradually shifting from a rather innocent, rural society to a much more hardened and sophisticated urban world. And Magnolia's adventures will take her from the savage natural beauty of the mighty Mississippi to the gambling dens and brothels of 'Gilded Age' Chicago to the jumpiness of the 1920's 'Great White Way' of New York.
Evidence arises. Donald Gallaher was eventually cast as Ethel Barrymore’s son in the 1915 Edna Ferber play, “Our Mrs. McChesney.” I have copies of the New York and Chicago playbills. There is no way Ferber and Donald would not have met, and the possibility of Ferber learning the family saga from either Donald or his mother Grace is very strong.
In addition, by the 1920s, Edna Ferber was a close friend with family cousin Neysa McMein. The two were both members of the Algonquin Round Table. In fact, Ferber created a character, Dallas O’Mara, in her 1924 novel “So Big” based on Neysa McMein. Neysa may also have told Ferber the family story, and Ferber, knowing a good juicy yarn when she heard it, moved on to develop it as a large part of her next novel “Showboat,” which appeared in 1926.
One afternoon, my husband Carlos was chatting on the phone with an old friend, Marc Zimmerman, a professor who has taught at the University of Illinois at Chicago and served as a dean down at the University of Houston. He's a guy who knows just about everything about every topic. Carlos relayed the details of my family, not leading him with any context or reason why he was bringing it up. Zimmerman just said, “Sounds like Showboat.”
During a musical theater intensive at Chicago Humanities Festival, I told Robert Kimball, the well-known musical theater historian, about my family story. He suggested I contact Showboat expert Miles Kreuger, who is also the author of “Show Boat: The Story of a Classic American Musical.” Kimball gave me Kreuger’s home phone number. I called Kreuger and we had a nice chat over the phone for about an hour. Essentially, what Kreuger told me was “I think you may be onto something.” I later told Kimball, and his eyes widened.
I mailed a copy of this document, minus the last paragraph (above), to Kreuger to keep in his “Musical Theater Museum,” called the Institute of the American Musical, which comprises an array of musical theater archives in his private duplex in Los Angeles. Here is a piece about his museum from National Public Radio: http://www.npr.org/2011/03/02/134207970/Musical-Theater-Museum-Struggles-To-Preserve-Archives ##

Gaylord Ravenal: Did My Grandfather Serve as Inspiration for This Showboat Character?