It is not a good idea to set your deck with only full melee or squishy range cards. Make sure your deck includes a balance of characters in your deck to counter several units from the opponent: ‘Tanks’, AOE units or range units to finish off towers. Also, do not put all your cards containing high aura (5) in your deck because you will have to keep waiting for aura refills in order to summon them. This will put you into a disadvantage during battle especially if your enemy units kill your unit with lower aura. You can check the card details including stats for every character by clicking on the info of that selected card. 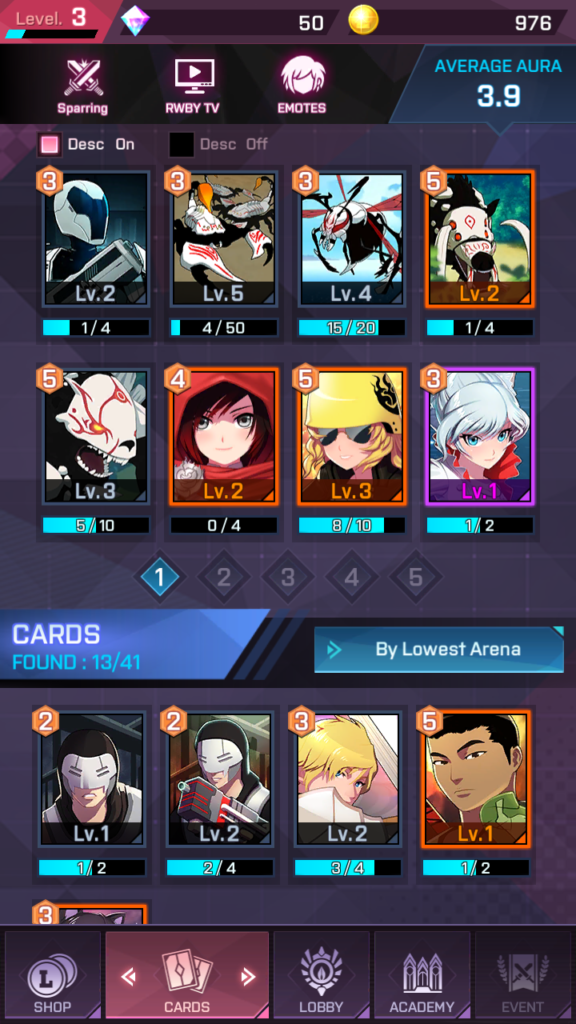 It is much better to level up your cards during the early stages of the game especially if you are going F2P. A level 9 common rarity card like the white fang gunners will be much stronger than a level 2 rare card in terms of overall stats. Common cards are very easy to level up as they can be obtained pretty easily from matches or chests. 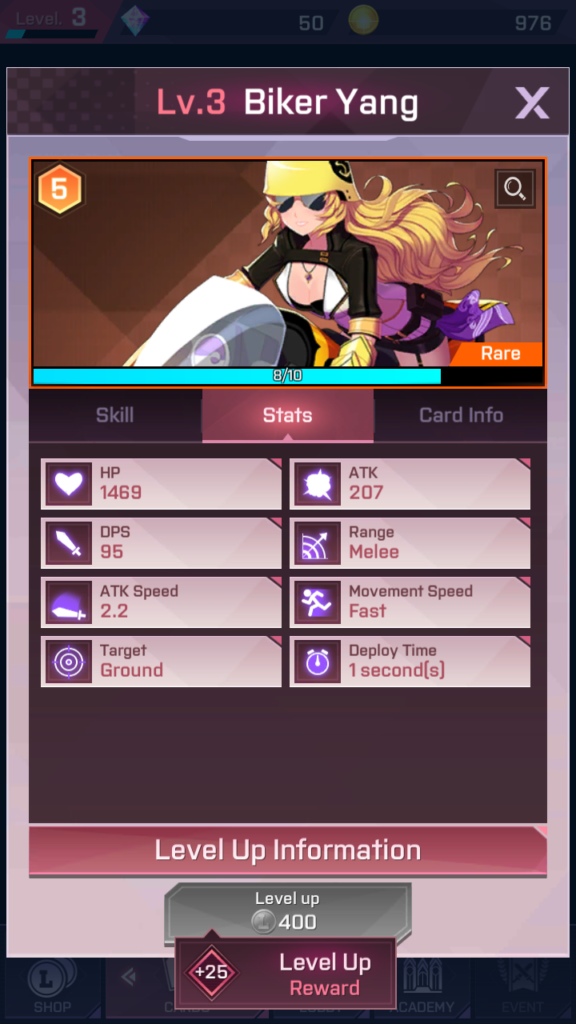 This game rewards player who spent money in this game similar to Clash Royale. I suggest spending money on premium dust which can be exchanged for either Lien (Money currency) or open crates for high rarity cards. I suggest exchanging it for Lien to spend on the daily shop as obtaining Lien in this game is very difficult but it is up to you.

Do not summon units as a solo, otherwise, your units will get destroyed easily. Instead, try to figure out different combinations that are stronger when summoned together. One example is summoning both baby death stalkers and white fang gunners together which is great for rushing towers very quickly. Another example is summoning Yatsuhashi and white fang Gunners for a powerful defense push.

Aura trades, similar to Clash Royale are key to winning in RWBY Amity Arena. Low aura cards with a high amount of units like baby death stalkers and lancer swarms can take down Ursa Major easily. However, they are vulnerable to AOE attack unit cards like Scythe Ruby and Yatsuhashi.

You might be tempted to mute the game while playing RWBY Amity Arena on a train or taxi. I would suggest wearing headphones while playing. Some of the audio in the game does have useful audio cues that attract your attention when your units are killed or when your tower has been under attack. 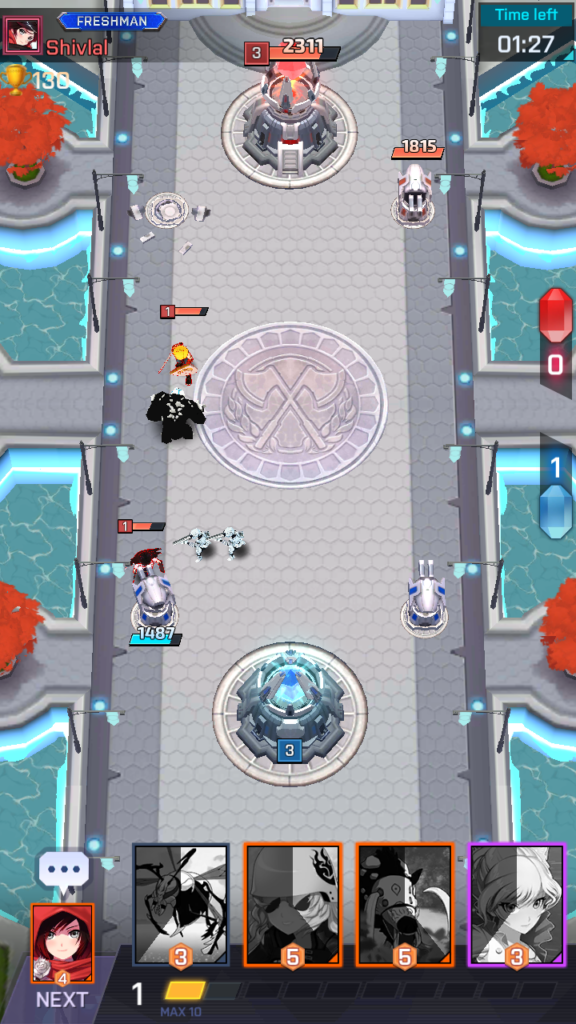 Being patient or rush in

If you are just starting out, you might be tempted to summon your units as quickly as you can. But most of the time, it is better to let the Aura gauge build up. I would suggest waiting for your opponent to summon units first so that you can summon units that counter their attack.

But there are times that you can summon all your units at once to surprise the enemy, then I will suggest doing so. You might even catch your opponent off guard and take down all their towers within seconds for a clutch victory.

Summoning tank units from the back

Most tank cards do not move very quickly compared to other cards so I would suggest summoning them behind your towers. By the time the dropped unit gets to the midway points, your Aura gauge will be recharged to full and you can summon more support units. Take note though, as range units and opponent towers usually counter these type of push so it really depends if you want to take the risk or not.

If a very strong unit that is moving towards one of your towers or a unit reaches your tower very quickly like the Ribbon Blake unit, drop a cheap aura unit on the other side of the enemy tower. Chances are they might take the bait, allowing your towers to shoot at them and plan for counterattacks. The towers are actually quite tanky in this game which can be a good tactic to make your pushes stronger. Some cards actually have its own skill which can turn the tide of battle so use their skills wisely.

Check the timer during battle

Timing is key in this game. Matches last for 3 minutes long, but the last 60 seconds the Aura will regenerate at 2x speed, allowing both players to summon units a lot quicker. Take full advantage of this especially in a situation where you and your opponent’s scores are even but your opponent’s tower is weak. Defend until the final seconds and mass summon units to destroy their tower.

Playing the ‘Play For Fun’ mode

Academy is a Guild feature which is one of the important parts of RWBY Amity Arena. I would suggest joining an Academy if you have not done so. Other than chatting with other Academy members or playing friendly battles, you can make different card requests or donate cards to other members. It is a win-win situation especially if you need specific cards without the hassle of opening chests or giveaway unwanted cards that are useful to other members.

I recommend completing all of the point and Arena missions as completing them will reward you with premium dust, Lien and even cards. You will also obtain chests which contain cards and Lien. If you just started the game, complete the new user missions to obtain premium dust easily. 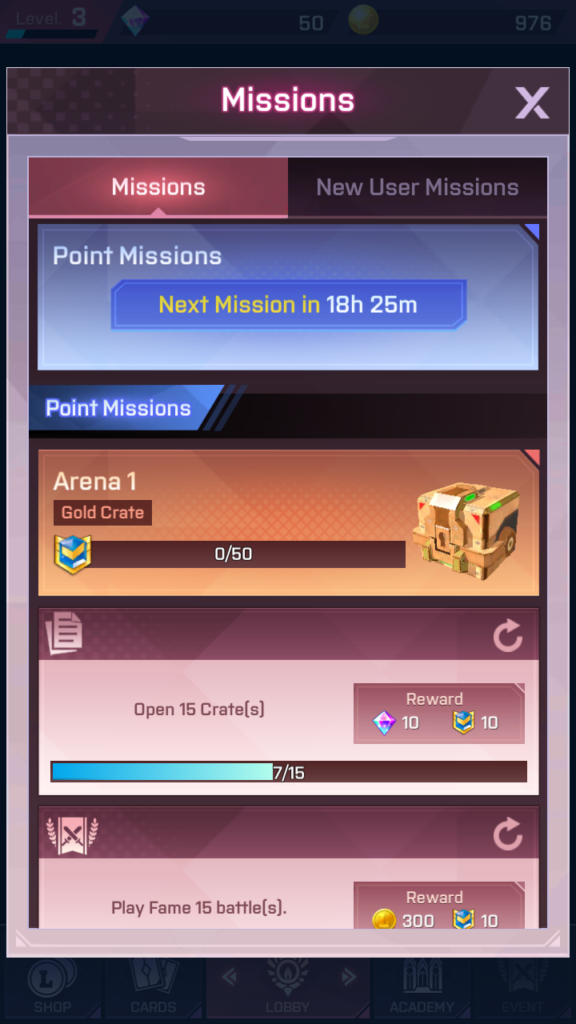 You can watch other players battle each other from the RWBY TV (Main Menu->Cards->RWBY TV). It is also the best way to figure out which cards are overpowered or figure out new strategies that will help you for future battles.

If you are new to this game, you can download this game on either IOS or Android.