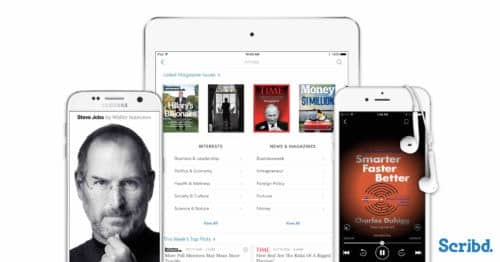 Scribd has let the cat out of the bag.

Scribd just released a new update for its Android app in Google Play, and I hope you are sitting down before reading the changelog:

Scribd is going back to the Unlimited reading plan that they ended in February 2016. As you can read in the changelog, you will be able to read as many ebooks, magazines, and newspapers as you like.

Edit: Here’s something else that leaked. I couldn’t get the Scribd rep to admit it, but there is a catch to the service. Here’s the fine print:

How many books can I read each month?

As many as you can! We strive to provide the most comprehensive catalog to all of our members. We can’t guarantee the availability of any specific title, but our members can always read an unlimited number of books and audiobooks each month. Occasionally, we have to limit the titles that you’re able to access within a specific content library in a 30-day period. This is similar to many unlimited data plans offered by cellular providers, in which data limits may be restricted once a user has consumed a high amount of data in a given month.

So basically this service is unlimited(*) – we’ll just have to wait for users to encounter the limit before we know what it is.

Thanks, Marjorie, for the tip!

So the news broke last night, and it’s hard to figure out what is worth adding.

For starters, Scribd hasn’t taken new capital, it still has the same owners, and no, the book publisher contracts were not renegotiated.

And no, the catalog hasn’t shrunk; I’m told Scribd now has more romance titles than what they had before they culled the popular titles in 2015 as a cost-cutting measure.

Scribd has over a million titles in its catalog. In comparison, KU has around 1.7 million, and there are around 4 to 5 million titles on the trade ebook market (this doesn’t include comic books or a lot of non-fiction).

The company is making the change because they have far fewer of the subscribers that used to read dozens if not hundreds of ebooks each month. This is essentially a shift in user patterns, and it is one that has made Scribd profitable.

Scribd boasts 700 thousand paying ebook subscribers, and it says it is turning a profit. But even so, its service is a lot smaller than Kindle Unlimited. Scribd has monthly revenues of around $6.3 million (less free months given away to draw in new users) while Amazon pays out over $20 million a month (between the funding pool and the all-star bonuses).

While we do not know the revenue generated by KU, it still pays out at least three times what Scribd pays publishers and authors – and KU also pays most of that money to authors, rather than to publishers.

But let’s be fair: Scribd has succeeded where B&N, Google, Kobo, Oyster, and a dozen other ebook startups have failed.

Scribd is turning a profit in the ebook market.

That makes Scribd the winner of the cage match that is the ebook industry.

That said, I wish we know more about how Scribd will throttle users. They have implied in the announcement blog post that they are going to do so:

Our new unlimited offering will be truly unlimited for the vast vast majority of subscribers, but occasionally some of these most voracious readers will see a temporary reduction of the catalog for a portion of the month.

What this sounds like is Scribd is planning to throttle the 2% to 3% of users who read too much while letting the profitable subscribers proceed unmolested.

Arguably, that is not a true unlimited but actually the kind of faux unlimited plan that cell phone companies offer (which is what Scribd said in the FAQ).

Will the throttling impact you, do you think?

You just finished reading Updated: Scribd App Update Reveals Return of Unlimited(*) Reading which was published on The Digital Reader.