A sanctuary for cows and people: New Gokula Farm

The golden gates of New Gokula Farm rise above the rolling green hills at the end of a quiet meandering track through the Hunter Valley. Nestled at the foothills of Pokolbin State forest in Millfield, the farm is a sanctuary to 65 cows, bullocks and calves and home to the Hare Kristna temple of Sri Sri Radha Gokulananda.

We are greeted by quiet, children play in a playground below the main temple, swathed in richly coloured Indian fabrics. There is a heady strong scent and song wafting from the mud brick temple. The sign by the walk to the temple states:
‘Welcome to New Gokula Farm. We are working tirelessly to maintain a sacred, spiritual atmosphere…’ Followed by their requests on how they wish visitors to respect their place.

In the simple temple is an alter with Indian figures made from cloth and richly decorated, a couple of devotees sing, dance and play a tambourine, dressed in their traditional white robes. It is light, joyful.

The Hunter Organic Growers members and visitors gather in their large hall, an enclosed verandah off the temple. It’s hot outside, the light streams through the many windows. Large dishes of broad beans and their leaves, salads with cheese and a traditional puffed bread of Puris, and rice were served. A lemon drink and cold desserts of sweet rice pudding and a semolina and mulberry dish called Halava. Many of the ingredients were grown less than 100 meters from where we consumed them. Vegetarian food has never been so good!

Kaliya. A man with a thoughtful face pink from the sun wearing a broad brimmed hat speaks about New Gokula. It is a place of diversity, an interactive farm that is not aiming for commercial success but to provide for their needs and a place where people can come to experience their way of life. He stands in front of a wall of photographs proudly displaying their cows like a family album, each with their own name. The cows are supported through a sponsorship program, individuals may select a cow to support. Their fundamental principal is a symbiotic relationship with the cows, a sacred animal in Indian culture. Permaculture shares similar ethics of respect for all living things and the natural course of nature. “It’s a nice pleasure working with cows and the natural environment”.

A short walk from the temple is a greenhouse for their sacred Tulsi Ocimum tenuiflorum, a tropical plant. Often described as Holy Basil, it is not actually a basil but is an aromatic plant in the family Lamiaceae native to India. It grows as a many branched sub-shrub, 30–60 cm tall with green or purple leaves. Traditionally it is used as a medicinal plant and an uplifting herbal tea. New Gokula uses it as part of their worship, being considered an elixir of life. They provide plants for Hare Kristna groups in Sydney. Beside the glass house grows a Neem tree also native to India. It’s used as a toothbrush by chewing the twigs, the leaves are eaten as greens. It has significant value as a pest repellent in organic farming practices and for a wide variety of medicinal uses including as an antiseptic, antifungal, antihistamine, and insect repellent, in addition to cosmetic uses and cooking.

Down a gravel lane an orchard, and a field of large cabbages and broad beans that tower above our heads await their harvest. A man with a broad grin and heavy build stands up from behind a wheel barrow. All the goodness of gardening is written on his face.

There is another photographer snapping away. His white robes a contrast to the green pastures. He is eager to chat about photography, where the best places are at the farm to shoot at each time of day, travel and his family. He came from Luxemburg, after travelling in his three month university breaks around Europe and holding slide nights of his photos in cities he visited, sharing his stories. Now with a wife and child he has settled at the farm only this month, working as an educator of the Hare Kristna faith. He has settled.

Here in these fields of plenty cows have a home for life. Four elderly cows rest in the shade of a eucalypt. Two of them came from a neighbour to retire here. They seem unperturbed by the crowd that gathers to pat the friendly chocolate and white milking cow. She sits quietly taking it all in.  Kaliya is asked whether they put them down when life becomes a bit too tough for them. “They're not going to put me down so I won't put them down!” If a cow is in a difficult situation he explains that he’ll limit the feeding and they'll go on their own. They have their cycles of happiness and suffering as we do. They bring as many people as they can to experience the farm and the placid cows. It’s valuable to have assets where people can come and be in nature, see where our food comes from. We've become disconnected from our roots, its better if we live close to our needs. Cows relax you, they're not stressing about what you have to do at 3.45pm! 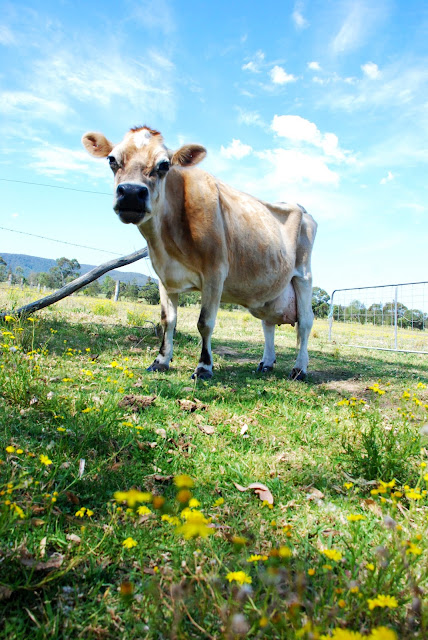 Seven milking cows currently provide for the dairy, a small building situated above the fields of cultivated for their meals and their vegetarian restaurant in Newcastle. “Milk is very close to the blood” Kaliya reaches inside a fridge and produces a stainless bucket brimming with a thick creamy coloured milk. This is illegal, be very careful. A look of delight and mischief brims in his face. “Doctors use raw milk therapy.” ‘The milk cure’ as it has become known employs milk as a curative agent for disease. The writings of a Colonel McCarrison, a British Army medical officer record the absence of disease seen in a district of India over a nine year period that he observed the locals thrive on a simple diet of vegetables, fruits, and milk and milk products. At the farm they drink lots of milk. A fresh Indian lightly flavoured cheese, Paneer is made by boiling whey with an added souring agent. Butter is made on site by churning yoghurt. Ghee is made by heating butter. A health inspector once asked if they were selling raw milk. “No, our members own these cows, I just milk them.” was Kaliya’s response.

Many thanks to Gaura and Sachi for cooking such a wonderful lunch that was enjoyed by all.

How To Make Smoothies At Home?

A sanctuary for cows and people: New Gokula Farm