The UK’s 6 Most Energy Efficient TVs

From streaming the latest show to spending hours on that latest video game, and maybe even hosting a Zoom meeting, our TV screens are seeing a lot of action.

Over lockdown, our TV time increased by a third as we spent up to 40% of our days sitting in front of the TV. It’s easy to forget that so much electricity is being used up just by us sitting on the couch all day.

MICRO BUSINESSES
Flying Carpenter Ants!
Capture Attention and Drive Traffic w…
Did the market sprint to finish today…
Spider-Man: If This Be My Destiny - L…

And while it’s not exactly possible to make an eco-friendly TV (they’re all plastic), it is possible to reduce the energy you use and waste by purchasing the most energy efficient TV you can find.

Bonus: saving this energy will save you money too! 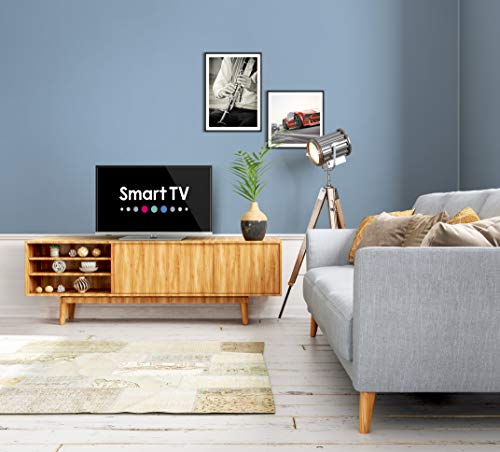 First things first, this TV scores an F energy rating, which isn’t the highest on our list but it’s still very impressive. As of March 2021, the new rating system has made most previous A+ TVs a G rating! So, an F rating isn’t to be dismissed.

What really makes this TV an excellent choice is the average power consumption. It uses 31W on average when it’s turned on, and roughly 32kWh per year. That’s hardly anything!

Sure, the screen is only 32 inches, but you still get a HDR screen and Smart TV features (hello, Netflix) so it’s not all bad. The F rating leaves room to improve, but the energy consumption figures are impressive.

If you watch TV on your mobile phone (or simply Youtube), make sure you also have an eco-friendly phone case.

The 65-inch P610K flatscreen TV by TCL is a fantastic energy efficient choice if you want a large screen. In fact, only the 65-inch version has an E energy rating, while the 43-inch is rated F.

Before the rating system changed, this energy efficient TV scored an A+. It also has an auto power-off function, to save energy when you fall asleep on the couch. Annual power consumption is 128 kWh. That’s 4x the Panasonic TV above.

As for features, this is a Smart TV with 4K and UHD capability, so you can watch The Crown in all its high definition glory! 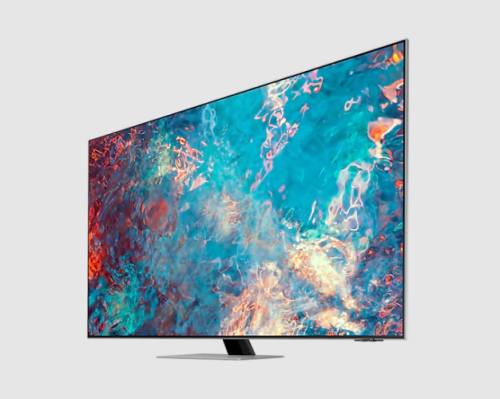 This is one of the newest Smart TVs out there, being released in 2021. The 75-inch QN85A is a QLED LCD screen, so it offers fantastic graphics and definition. If you really want to feel like you’re at the cinema, this is the TV to go for. It has an E energy rating and typical power consumption is 106W.

Samsung really are at the top of their game with TVs. We were unhappy to see that the vast majority of their models are rated G. But with unparalleled features, that’s to be expected.

There is a similar Samsung TV that made our list, the QN94A, which you can find below.
This TV is currently available for preorder. 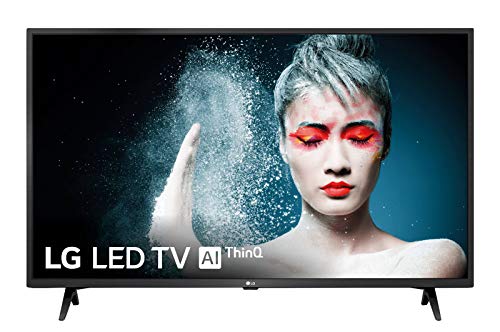 This 43-inch LG flat screen TV is mid-range when it comes to size. It’s not tiny, but it’s not massive. It has an F energy rating score, so nothing amazing, but we like the features. Netflix, Amazon Prime, Freeview, YouTube, BBC iPlayer, and a web-browser are included. The Dolby audio is a nice touch too.

Standby mode drains 0.5W so make sure you unplug this TV if you want to save energy as much as possible. Average power demand is 48.5W, but that will shoot up if you turn on the HDR mode.

If you want a Smart TV that runs as efficiently as possible, this LG TV is a good choice. 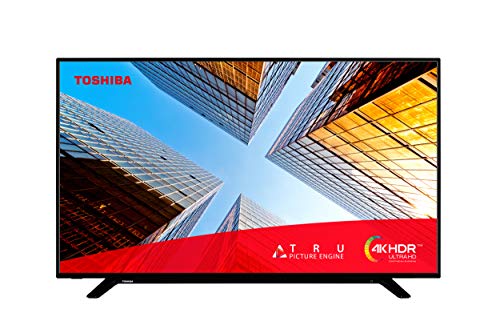 This is a decent TV by Toshiba. It has an up-to-date E energy rating, but that will fall to a G when you switch on the HDR mode. Pre-rate changes, it scored A++.

You should consider this TV if you enjoy a spot of energy efficient gaming. The Toshiba Gaming Mode is really cool, the graphics are amazing, and the Onkyo integrated speakers make it an immersive experience. It has 2 USB and 3 HDMI to hook up all your consoles. 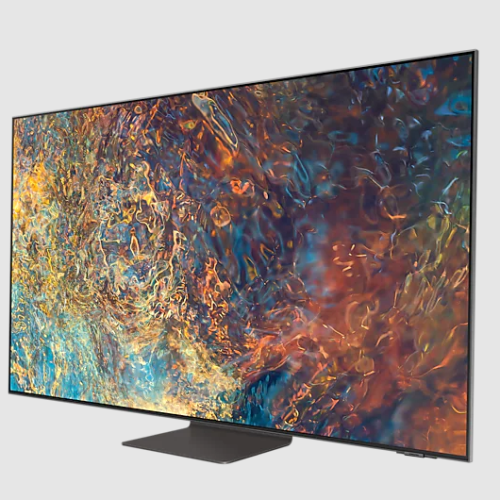 We almost made this TV our top LCD TV, but it just misses out on the other Samsung energy efficient TV. This model, the QN94A, is also 75 inches and achieves an E energy rating. Unless you looked at the model number, you’d think these were the same TVs.

In terms of energy use, this model has a typical power consumption of 107W, which is just 1W more! Yep, it was that close.

The main difference between these Smart TVs is that this model has an anti-reflection screen so there’s no glare, and the price is a little steeper.
This TV is currently available for preorder.

What to Look for When Buying an Energy Efficient TV

Good news! The official energy label we use in the UK is changing in March 2021 to make it easier to work out how energy efficient a TV is.

Previously, the ratings went from G to A+++, but we’re ditching the A+ grades and simplifying it. From now on, TVs will be rated from G to A. The little tab icon that states the energy rating must say ‘A t G’ down the left side. If it doesn’t, then it’s the old rating which is no longer applicable.

Many flat screen TVs that were showing A to A++ on the old rating are now scoring G to E.

The energy label will also display the kWh so you can easily compare energy consumption, and it will show the different energy ratings for different modes. If the TV uses more electricity in HDR mode, the new label will tell you so.

All TVs sold in the UK should have this label – don’t buy one that doesn’t, even if it’s second hand.

Furthermore, look out for Energy Star stickers. These aren’t as common in the UK as they are in the US, but generally an Energy Star TV saves 30% more energy over a standard appliance.

Even inefficient TVs won’t cost you a fortune. The best you could find pre-March 2021 is an A+++ TV rating, but these are hard to come by. Generally, an A++ TV is as good as you can get in the UK unless you plan to spend a fortune.

Top of the range TVs score low, unfortunately. The QN90A Neo QLED 4K HDR Smart TV from Samsung (one of the newest TVs for 2021) scores an F, for example.

Being energy efficient might mean switching for an older model.

As for running costs, according to The Energy Saving Trust:

So, it’s not a massive amount especially when you pay your electricity bill per month. Switching to an energy efficient TV is still a significant saving, however.

If you read our article about sustainable electronics, you’ll know that up to 80% of a device’s total carbon footprint comes from the manufacturing process. So, that’s why checking up on the company is recommended.

From using recycled metals to ensuring worker’s rights and biodegradable packing. This doesn’t directly impact the energy efficiency of the TV when it’s plugged in at home, but it’s still important.

How much electricity does a TV use?

Not a huge amount. OVO energy estimates that consumer electronics (including TVs as well as phones, laptops, etc.) use 4% of the total electricity we use in our homes. A 40-inch LED HD TV uses roughly 100 KWh per year, according to The TV Expert.

It’s worth reducing energy though – the cost savings can be significant over the years.

What makes a TV energy efficient?

OLED and QLED use slightly more energy, as each pixel is individually lit rather than using LED backlighting.

At the bottom of the list, plasma TVs and lamp-lit LCDs have quite high energy use. These are hard to come by though, as they’re being phased out. You’ll have no trouble finding a good LED flat screen TV instead.

Do Smart TVs use more power?

Yes, they do. Any LED TV will be quite energy efficient (like an LED light bulb) but additional features like WiFi connectivity on Smart TVs will bump up the energy use.

It’s just like your smartphone – when you shut down all your apps, switch on airplane mode/turn off WiFi, and dim the screen, the battery lasts longer.

Do HD and 4K TVs use more electricity?

Compared to a simple LED TV, yes. The higher the definition, the more energy that’s used. 4K TVs use approximately 33% more energy than HD TVs, and 5K will draw even more power.
Does your big screen TV equal big power consumption?
Yes, but not by much. According to Energy Saving Trust, a 32-inch A rated TV costs £12 per year to run, while a 40-inch A rated TV costs £18. That’s an additional 50p per month.

Screen brightness and connectivity features (like a Smart TV) have a bigger impact on power consumption.

The post The UK’s 6 Most Energy Efficient TVs appeared first on beeco.

The UK’s 6 Most Energy Efficient TVs

Subscribe to Eco- Tips And Guides For A Greener Lifestyle