Have you ever taken a walk in the woods, taking in the view, enjoying the different smells and listening to birds sing?

…Yeah, you probably have. Not such a big deal.

But have you ever taken a bath in the woods? A quick dip in a freezing stream last summer doesn’t count; we’re talking about a long, relaxing bath. You can’t quite picture yourself doing that sort of thing in a forest, right?

Moffat Camping and Caravanning Club S…
Romantic Interior Design
Tired of Eczema Flareups? Here’s Your…
What is my motivation?
Help For The Inner Journey

Well, more and more people can actually say they’ve taken this enticing kind of bath. This is due to the growing success of shinrin yoku, a Japanese practice whose name is loosely translated into English as — you’ve guessed it — “forest bathing”.

Why All The Hype?

But what’s so special about this concept that it’s attracting all these people and drawing a lot of attention from the media, so much so that even a highbrow business magazine like Forbes has decided to talk about it — not once, but twice?

The reason is that forest bathing appears to boost our mental and physical wellbeing. And while we all know that spending time in nature is good for you, extended and focused experiences like forest baths seem to have a number of specific, measurable benefits.

Here are just some of them, as confirmed by a number of studies:

Are you already signing up for your first forest bath? In case you’re curious to know a bit more, let’s see how this practice developed and how it works.

A Bit of Background Information

The term “forest bathing” first appeared in a 1982 campaign by the Ministry of Agriculture, Forestry and Fisheries of Japan, touting the benefits of a deeper connection with nature. It’s no wonder that the concept was born in this country, considering that about 67% of its surface is covered by forests — over twice as much as the world average.

In 1986, the Japanese Forestry Agency issued a list of 100 forests in the country, promoting the practice of forest bathing and the conservations of those areas. People loved the idea, and forest bathing slowly started to take hold.

Several studies on the subject have been conducted through the years, and a large majority of them has confirmed the benefits of this kind of experience.

Many books on shinrin yoku have also been written. One of the most authoritative experts is Dr. Qing Li, author of Into the Forest — which besides his interesting text, includes so many gorgeous photos of forests that any reader will certainly feel compelled to reach one as soon as possible to start putting his advice into practice. 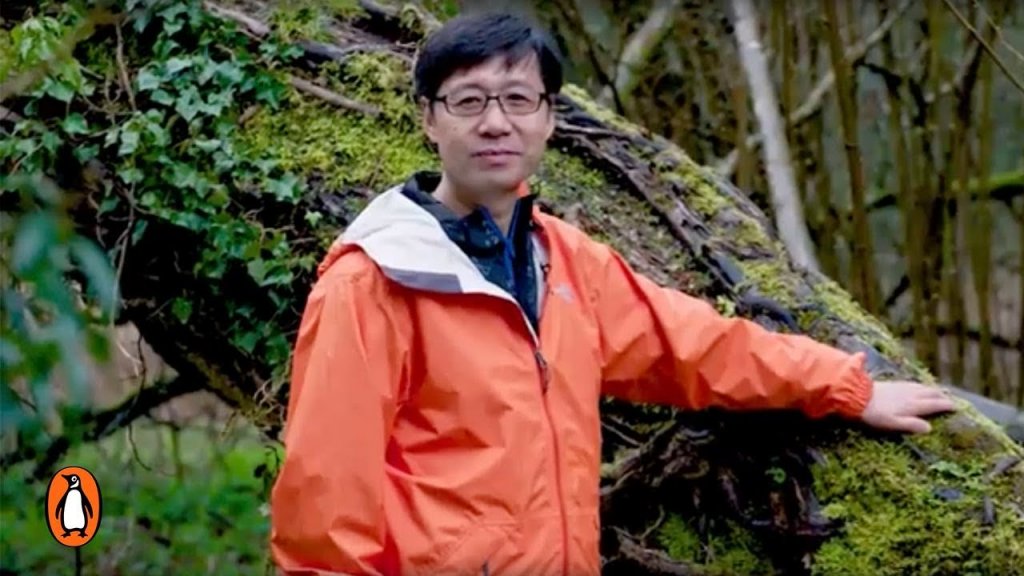 In the last few years, forest bathing has been spreading from Japan to the rest of the world at an amazing rate. One of the most renowned institutions in this field is the Forest Therapy Institute (FTI), which offers forest baths and workshops for the general public and training for nature-based practitioners in several countries, including the UK & Ireland, Italy, Spain, Portugal, France, Brazil, Colombia, the US and more.

In terms of training, FTI offers both programs for forest bathing guides and for forest therapy practitioners — who learn how to work with specific populations, including clinical ones, and collaborate with healthcare professionals.

The success enjoyed by this practice ot too surprisingly, perhaps, since it’s a concept that can easily resonate with most of us — after all, who wouldn’t want to enjoy a relaxing and restoring bath in a lush, green forest? Let’s see how it works, then.

How a Forest Bath works?

First of all, just spending time in a forest improves your health and well-being. There is now an emerging evidence base for this, related in part to the positive effects on the organism of substances like phytoncides, which are volatile organic compounds emitted by plants and trees. Apart from their antimicrobial action, they appear to lower blood pressure and the levels of cortisol, the stress hormone. 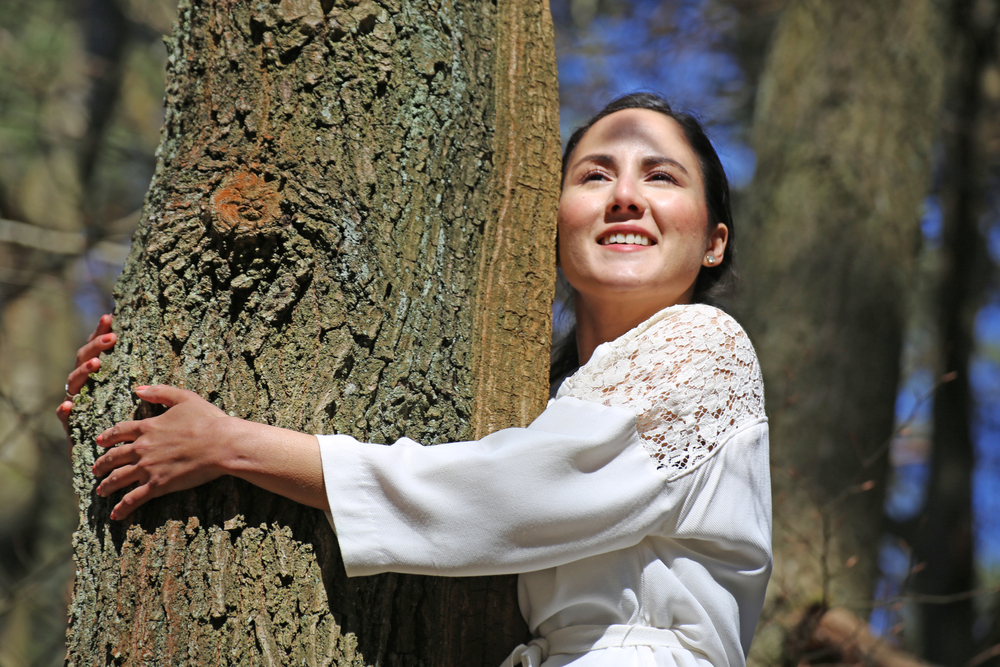 But there’s much more to the woods than these magical substances. And this is where the specific format of forest baths comes into play, helping people establishing a deeper connection with nature and reaping all its benefits.

One of the main principles of shinrin yoku is the activation of the senses. Participants are guided through a series of exercises and experiences aimed at awakening each of the senses, which lead most of them to enter a state of flow and discover a whole new meaning in the expression “to take in the natural environment”.

Once this sensorial pathway has been opened, the connection with nature is developed even further through a number of so-called “invitations”, which allow participants to relate to the environment in inspiring and unexpected ways (don’t worry, no tree hugging is involved — unless you really, really want to do it).

These wide-ranging invitations may include, just to mention a few examples, an exploration of movement in relation to the forest; a creativity session in which people draw or write poems while in a state of flow; exploration work in couples or small groups; a quiet time to connect with the surroundings while sitting still in your chosen “sit spot”, and many, many more. 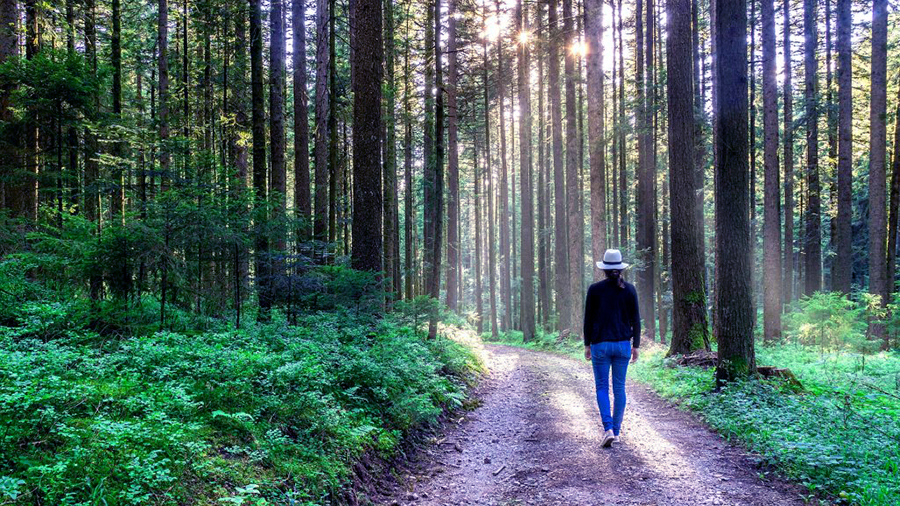 Forest bathing might recall a sort of “mindfulness in the forest” experience. And this practice does have several things in common with mindfulness. But the existence of a formalized model, which is designed to make the most of the specific forest environment, gives participants the opportunity to connect to themselves, to other people, and to their surroundings in a way they’ve never done before.

That’s quite a valuable experience in and of itself, enough to give you the gift of a few unforgettable hours away from your routine — not to mention its long-lasting benefits, which seep into the participants’ daily life making it look a lot easier… and greener.

If you wish to experience your first forest bath, a good place to start might be the Forest Therapy Institute website, which offers a world map you may use to find a guide. Enjoy… and let us know how it went.

Subscribe to Eco- Tips And Guides For A Greener Lifestyle