How NFL football players kneeling for a principle is a man's way of finally standing up.

There is a direct link between Muhammad Ali refusing to serve in the US army during the Vietnam war, Tommie Smith and John Carlos black glove protest at the Mexican Olympics, and NFL football players protesting on one knee. 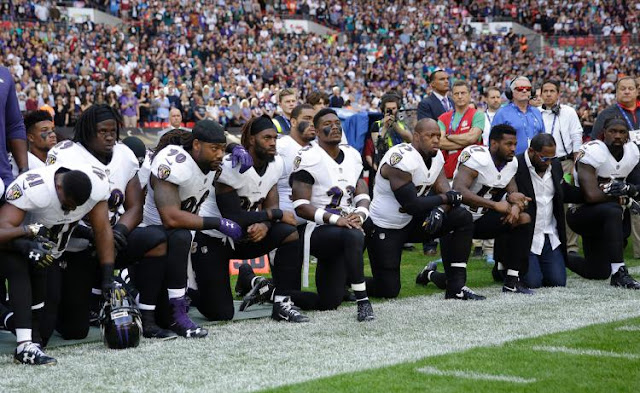 Millions of Football fans must have felt grateful to President Trump for provoking the entire National Football League into a goal line stand last month. The sight of hundreds of players on the sidelines, arms linked with coaches and owners during the playing of the national anthem, not only soothed fears that a disrupted season lay in the NFL’s future, but gave those fans tacit permission to keep on enjoying the games without being too disturbed about brain trauma on the field, collusion in the front office, or demands for racial justice.

Salir del Ropero: una película lésbic…
The Cage of the “Surreal” – Post 1 of…
How to Keep Him Interested in You For…
Green Card Denials Increase Substanti…
Telugu TechNews 733: OnePlus Nord and…
Once again, Trump had made it all about Trump, then quickly blitzed on to fresh outrages.
Had anything really happened?
Maybe.
One long-time national sports conscience, Richard Lapchick, director of the Institute for Diversity and Ethics in Sports, declared that Sunday, September 24th, was “the most important sports day since [Muhammad] Ali decided not to fight in Vietnam.”  From it, he foresaw the possibility of a civic conversation emerging that would create “unity in our communities.”
On the other hand, could that Sunday of Accord have actually been no more than a Hail Mary pass designed to briefly shore up a vulnerable sport? Could that show of NFL unity have helped to block growing concerns that, amid a blizzard of negative news and views, pro football was beginning to fade as America’s most popular spectator sport?

In other words, could Donald Trump have saved professional football?  Give him credit for this: he certainly spun a mild demonstration against racism into a flagrant case of disrespect for the flag, the military, our wars, patriotism, the nation, and above all else, of course, Donald J. Trump. With his usual skill, he then reshaped that sizzling package into yet another set of presidential pep rallies for his own fans, that much-invoked “base.” In the process, he also helped highlight the Jock Spring that had stirred last year when San Francisco 49ers quarterback Colin Kaepernick first refused to stand for the anthem.  Though it seemed to fade after the initial blast of publicity, it was revitalized last month when the president labeled any football player who knelt or sat or stayed in the locker room during the playing of the pre-game anthem a “son of a bitch,” the same term he used last year to describe the killer in the Orlando nightclub massacre.

Robert Lipsyte, author of the memoir An Accidental Sportswriter, is the jock culture correspondent for TomDispatch.

How NFL football players kneeling for a principle is a man's way of finally standing up.