Why are our school children in the UK and Ireland forced to wear uniforms?

Jude Collins has stirred up a hornet’s nest because of a comment he made on twitter, linking in some way, children,  Irish/british paramilitary organizations and a reputable Christian organization like the Boys Brigade.You can read and listen to everything here

Which got me thinking or rather asking questions
.

Query:  Just how “regimented”  are school-children in the UK and Ireland? 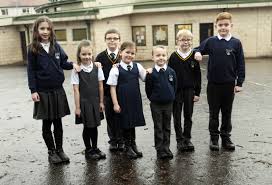 Query: Why should they wear uniforms at school, Boys Brigade, Brownies, Scouts, Girl Guides and so on?
Wearing a Uniform creates an esprit de corps. It is a badge of pride, creates an identity for a school and is an important part of being a school student.

A school uniform  means you are buying into what the organisation is all about.
Query: So what exactly is the school organization all about?
Forging tomorrow’s citizens.  Conformity is the name of the game!
Remember: in the big adult world outside of school, students have to cope with people dressed in all sorts of clothes and colours.

Uniforms attempt to iron out all individual differences so students don’t have to worry about peer pressure when it comes to their clothes.
Objection:  When every student is wearing the same uniform, everyone fills it out differently.
Roll on the best-body competition.

Potential bullies have one less target for their insults; it’s hard to make fun of what someone is wearing when you’re dressed exactly the same.
Objection: if appearance or social status (not clothes) are the reasons for bullying, then you can be quite sure they manifest themselves in other ways  (hair colour, lunch boxes, school bags, stationery etc).
Bullying occurs whether students wear uniforms or not and its root cause should be addressed 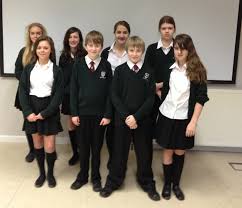 Queries: Why does the UK/Ireland think that compelling school children to dress in a uniform, like the military, is a good idea?
By suppressing free thought and self-expression,  is it to encourage conformity and hence a “followers” mentality, rather than individuality and a leader’s mentality?
By suppressing freedom of choice in something as basic as deciding what clothes to wear when you wake up in the morning is it to absolve the individual of  responsibility for whatever choice s/he makes?
Does  dressing a child up in a uniform  have a context, a purpose and a political outworking?

for example, do not wear school uniforms.
In these countries, as in the US,   schools have dress codes but no mandatory uniforms.
Query: So how do they manage to turn out fine up-standing citizens?
Maybe  these  states  are interested in nurturing, rather than standardizing, student expression. Maybe they want to foster the development of  individuals who will  become  leaders  or  innovators.
Query: What would happen if Irish schools abolished school uniforms?

Ben Madigan who wrote the above blogs here

Why are our school children in the UK and Ireland forced to wear uniforms?