Were Labour MPs who belong to LFI colluding with a foreign power to undermine the democratically elected leader of their party?

Rumours of infiltration and interference in the workings of the British Labour Party by Israel's intelligence agencies have long been circulating. Thanks to undercover reporting by Al Jazeera, we now know they're true.

The Israeli embassador has all but been forced to admit Shai Masot a diplomat and member of IDF intel has been working to "take down" MPs they considered troublesome or unfriendly to their interests They also instigated a campaign against Jeremy Corbyn becoming Labour Party leader.

To achieve this they helped set up groups within the Labour party to further their interests and advised selected members how to achieve ends which were favorable to the State of Israel.

The group 'Labour Friends of Israel' (LFI) was specifically mentioned in the undercover recordings, We know smears against the Labour party being antisemitic originated from within LFI . Many of these smears which were taken up eagerly by the mainstream media and specifically blamed Jeremy Corbyn for the supposed increase in antisemitism within the party.

LFI and other pro zionist groups shamefully attacked Shami Chakrabarti after her investigation did not uphold the claim the LP was institutionally anti semitic. When Shami issued her report to the media, Labour MP Ruth Smeeth claimed she 'fled in tears' from the press conference after she was harrased racially by a member of Corbyn entourage, as in the case of Angela Eagles fable brick this also turned out to be untrue.

Many of the most vehemently anti-Corbyn faction are closely associated with LFI. Michael Dugher, Gloria de Piero, who infamously appealed to Sun readers to join the party to defeat Corbyn are listed on the LFI website as officers. (both pictured below with Ruth Smeeth and Tom Watson on an LFI junket to Israel) 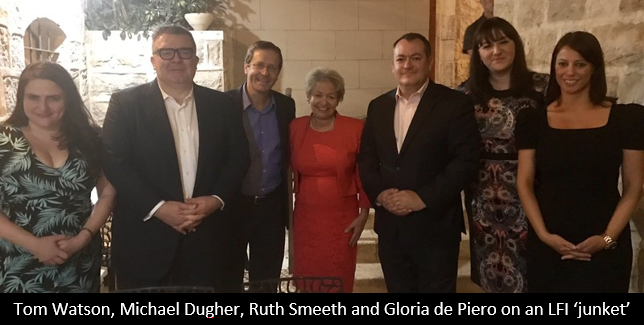 Other members of LFI who have been vocally opposed to Corbyn include Ian Austin, Jess Phillips, Chris Leslie, Chuka Umunna,  Wes Streeting, Margaret Hodge, John Spellar, John Woodcock and Conor McGinn, who once excelled himself by accusing Jeremy of attempting to use his Dad to "bully" him. It turned all Jeremy actually said to Connor was "I know you dad."

Deputy leader Tom Watson is not only a supporter but was a keynote speaker at LFI's 2016 annual lunch. He also appointed a former deputy chair of LFI Michael Dugher to head a ' fake news inquiry' which is designed to target Corbyn's support on social and independent media.

There is a clear pattern in much of these folks behavior, it's the methodology of the intelligence services the world over, false allegations are made, then the smears, then the mainstream media publicises the aforementioned as if they are facts, finally an august parliamentary committee steps in to set up an inquiry into them. Given many of the aforementioned anti-Corbynites hold powerful positions on these select committees, Chuka Umunna, and Hilary Benn are just two, no matter what the outcome of any inquiry as far as they are concerned it's job done.

The Labour party has now called on the government to immediately launch an inquiry into “improper interference in our democratic politics” after the disclosure that an Israeli embassy official had plotted to “take down” UK MPs regarded as hostile to Israel. The Al Jazeera undercover investigation reveals how the Israeli government is in the midst of a brazen, covert influence campaign in Britain.

“The exposure of an Israeli embassy official discussing how to bring down or discredit a government minister and other MPs because of their views on the Middle East is extremely disturbing.”

It is now imperative to find out if any of the above mentioned Labour MPs were colluding with a foreign power to undermine the democratically elected leader of the LP.

In a letter to the Guardian Karen Barratt best summed up this sorry tale:

I doubt whether Alan Duncan or anyone else critical of Israel will be surprised to learn of Shai Masot’s activities (Envoy plotted to set up pro-Israel political party groups, 9 January). One would have to be extremely naive not to recognise that so much of the negative reporting of any pro-Palestine stance is the result of a powerful Israeli propaganda effort. This has resulted in the deliberate misrepresentation of any criticism of Israel as antisemitism, even when it comes from Jewish individuals and organisations.

It has also enabled the denigration, whether motivated by malice or ignorance, of any politician who dares to support organisations like the Palestine Solidarity Campaign or Jews For Justice. As a member of the Labour party, I support its call for an investigation “into improper interference in our democratic politics” and would also support the suspension of the Conservative and Labour Friends of Israel groups, whose independence and credibility appear to have been undermined by these latest revelations.

Were Labour MPs who belong to LFI colluding with a foreign power to undermine the democratically elected leader of their party?