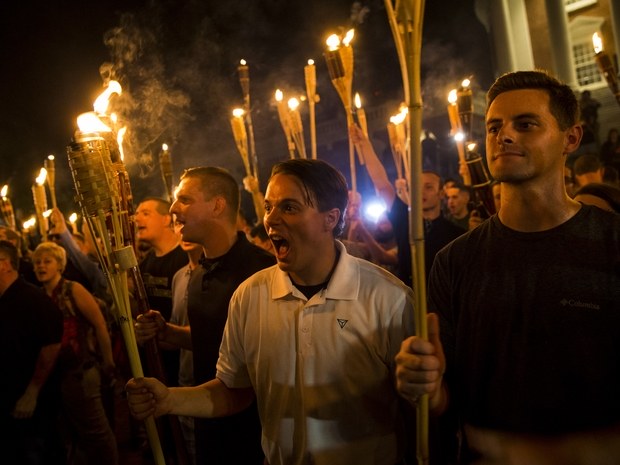 They are trying to tie Trump to Nazis, the KKK and white supremacists, saying these groups are Trump’s base. The Hill’s headline, “Trump must throw neo-Nazis and KKK out of his base.” Within their article, they begrudgingly acknowledge, “Most Trump supporters are not racist.” How sporting of them to say that. Does that mean that 49 percent of Trump voters are racists with views in line with Nazis and the KKK?

CNN contributor, presidential historian, and left-wing Democrat Douglas Brinkley supplies an actual number, saying “10 to 15 percent of Trump’s base are KKK white nationalists and alt-right racists.” Really? Given that Trump received about 63 million votes, that would mean close to 10 million are KKK members or racists.

The broader implication is that those of us who voted for Donald Trump and still support him are all racists. Not in the abstract, either. A friend of over 40 years who despises Donald Trump called me “a white racist” over my continued support of the president. As if calling me names will make me change my mind.

So how big is this racist Trump base? The far-left Southern Poverty Law Center estimates between 5,000 and 8,000 KKK members in the U.S. All of 0.003 percent of the population. For comparison, Evan McMullin received 700,000 presidential votes in 2016. The KKK couldn’t even affect McMullin’s vote tally in any meaningful way.

The KKK as a voting bloc might influence a mayoral election in a small town but in the presidential election, they are far less than a rounding error. Far more dead persons vote than do KKK members.

What about Nazis? Hard to track but estimates are a few thousand. Likely in the same range of the KKK.

The left-wing Southern Poverty Law Center identifies 917 hate groups in the US. But to be taken with a grain of salt as this self-denoted arbiter of hate that identifies “White Lives Matter” as a hate group but not “Black Lives Matter.” I suppose hate is in the eye of the beholder and that a chant of "Pigs in a blanket, fry 'em like bacon" by Black Lives Matter represents cooking instructions rather than hate toward police.

Let’s be generous and say there are a few hundred thousand various Nazi, KKK or white supremacists in America. Quite the voting bloc. By comparison, 16 million Americans believe Elvis Presley is alive. Now that’s a voting bloc that any presidential candidate would want in their camp.

And a few hundred thousand, assuming they voted for Trump and not Clinton, influenced an election where 130 million votes were cast? Did they all vote for Trump? What about Clinton? A KKK Grand Dragon endorsed Clinton for president. Never mind Trump-Russian collusion. What about Clinton-KKK collusion?

Instead the media and the Democrats should be concerned that one of their own is part of this supposed Trump base. Jason Kessler, organizer of the Charlottesville white supremacist rally is rumored to be a former Occupy Wall Street hooligan and an Obama supporter. Or that baseball shooter James Hodgkinson was a Bernie Sanders supporter and left-wing activist.

It’s the hard-core Democrat base that seems to be behind most of the recent violence, not Trump supporters. But the media wants to paint all Trump voters as Nazi-KKK-supremacists to try to delegitimize his presidency and agenda. With the willing assistance of Republican dupes like Mitt Romney, John McCain and Marco Rubio. Never missing a chance to dump on Trump, going so far as to embrace the Antifa thugs. No wonder the White House eluded all three of them.
Read more: http://www.americanthinker.com/articles/2017/08/if_nazis_and_kkk_are_trumps_base_how_did_he_win_the_election.html#ixzz4qImh9Vpi
Follow us: @AmericanThinker on Twitter | AmericanThinker on Facebook

“BUY Sqribble? My Honest Review!
10 Career Paths Where the Future is T…
Get Managed IT Services in Plano Toda…
Joseph Lang Makes Taxes Less Taxing W…
How and Why America Was Hit So Hard B…