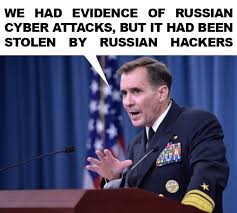 This is a good one and with the exception of a few trolls that messed up the comments with lies, you will find a wonderful witty section of comments…

Swedish parliament are blaming Russia for the wave of crimes perpetuated by migrants. Germans, who said that many “rapefugees” are sleeper FSB agents. Hacking US elections, protection and safe guard of Crimea, Syria, Iran and China. The fires in Fort McMurray, Canada. Russia offered to aid in extinguishing them, the Canadian Gov’t refused, so it’s Russia’s fault because they are a political enemy of the US so we couldn’t accept their help without facing hostility with the US, so it burned for a month, then a few weeks later it flooded with extreme rainfall in the region… Let’s not forget aiding to the death of terrorists, destabilizing world markets by purchasing gold and paying off debt. Installing the US president, supporting peaceful citizens in Ukraine to defend against the tyranny of the Nazi Regime installed and funded by the World Bank, US gov’t, Canadian, and English gov’t, IMF, NATO, CIA and Central Banks. Russia made us do it! Oh and lest we forget the strange weather coming out of the region of Russia spreading all across the globe. t’s Russia’s fault that Capitalism requires constant growth in the market. A market that is overly saturated and needs to take over all global markets to survive for a little longer. It’s Russia’s fault that we are willing to use our military to take over these markets, destroy dispensable nations for our own temporary gain. It’s Russia’s fault we have extreme debt and that any financial stability in the world is a threat because we may be forced to be accountable for our debt if there is someone out there who is financially responsible. It’s Russia’s fault that we have to resort to more and more desperate measures to accomplish our world domination goals because of its unwillingness to be a servant to the all mighty Oz… So you see, you need to play by our rules and we will play nice to you if you do.. because we are the just and moral light in the world, or didn’t you know that. “allowing Americans to have names like “billy-bob”” “breaking of the peace treaty in Ukraine” “breaking of the peace treaty in Syria” “breaking of the peace treaty in Afghanistan” “the murder of their own diplomats” “the drugging of the Philippines President to wake up and see the atrocities’ the US have done. Japan is now blaming Russia, Malaysia is blaming Russia. Global warming caused by Russia too as they are drilling for oil and gas. And they are the cause of men turning transgender. The destruction of flight MH-17 and the death of nearly 300 civilians. Blame the Russians for hilarious and bad ass YouTube videos.

or lets number them…

Blame Russia for the Ruble. Can’t believe you guys forgot President Trump… The Russians are Obviously Guilty of Inventing Chocolate flavored condoms. The World shortage of Toilet Rolls. Supplying the Pentagon with a drug based on the Rabies Virus so the Pentagon could bring out, ‘The Zombie Act’ which would allow them to kill all the American People they infect with it. Supplying the Pentagon and CIA with C4 so they could bring down the Twin Towers and pretend it was Bin Laden. (A question no one ever asked was…What was hidden under the Twin Towers. The Pentagon picked the date for the Demolition as a joke. Forget the month and date, what are the numbers? What else is nine one one) The list of calamities attributable to Russia continues : dam bursts in California, secessionist moves on the part of California and Texas , increased legal migrations of gays into San Francisco, climate change in the United States, mind control chemicals in our food and medicine , air pollution in Los Angeles … there’s more..

They left out Bambi’s mother dying.

Disney’s Bambi’s Mother’s Death. and The war in Syria and destruction of Aleppo…

There is more, many more…