The Shell Game (and the Political Revolution) 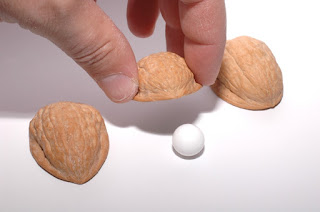 The Shell Game. What will you find under the middle one? The left one? The right one? How long will it take before you realize you've been had?

This past week we learned about the "Shell Company Game" for the super wealthy, courtesy of the Panamanian law firm of Mossack Fonseca. "The Panama Papers" reveal the where and how of the 1%'s billions that "disappear" so the money can't be reported as income and taxed. An international consortium of journalists began publishing names and details, and it's still early days in this leak of 11.5 million files. The opening stories reveal the tip of a very large iceberg, one that's already struck and sunk the Prime Minister of Iceland, a leader who ironically had up until recently been seen as tough on the banksters who collapsed the world's economy in 2008.

We'll have to wait and see what big names will be named in the weeks to come, but hold onto your hats while reading this next statement: This fiasco was predicted four and a half years ago by one outspoken independent Senator from Vermont, Bernie Sanders. Watch this short C-Span video with his prophetic words on the subject:

Here are some articles on the Panama Papers and what could happened next.

It's amazing how much Americans could benefit from this money being hidden overseas: http://readersupportednews.org/news-section2/318-66/36236-its-amazing-what-america-could-do-with-the-money-the-rich-hide-overseas

How could the Panama Papers affect the presidential race?
http://www.askmen.com/news/power_money/how-the-panama-papers-leak-will-impact-the-us-presidential-election.html

The Panama Papers are exactly why Hillary Clinton can't be president.
http://thefederalist.com/2016/04/08/the-panama-papers-make-the-case-against-hillary-clinton/

And how could it effect our government, our economy?
http://time.com/4280864/panama-papers-capitalism/

The journalists who broke the story and the nature of the files they uncovered:
http://panamapapers.sueddeutsche.de/articles/56febff0a1bb8d3c3495adf4/

A related piece we ran in December about the investigation into the Clinton Foundation's tax records and its tie to foreign powers and arms deals: http://bernie2016.blogspot.com/2015/12/hillary-clintons-blood-money.html


Mitchell Blatt, editor of Bombs and Dollars, shares this piece of revealing information and graphic. 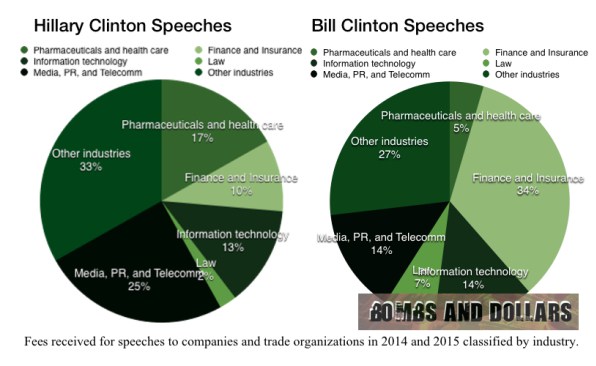 According to an analysis at Bombs and Dollars, the Clintons earned $2.5 million speaking to companies that also lobbied Mrs. Clinton while at the state department and donated to her foundation, including corporate tax dodger and mega-lobbyist GE.

Overall, the Clintons earned their most money from financial firms--$4.5 million.

Here's the link to the complete article (with many thanks to Mitchell for sharing it):
http://bombsdollars.com/index/index.php/2016/02/11/lobbying-paying-clinton-speeches-foundation/

Bernie Sanders' new campaign video shines a bright light into this quagmire of billionaires squirreling away their money in foreign shell companies so they can skip paying taxes and instead buy elections. It sums up all that's wrong with our corrupt campaign finance system. Share it with friends, family and co-workers who might not understand how the Citizens United ruling has allowed the billionaires to influence politicians. 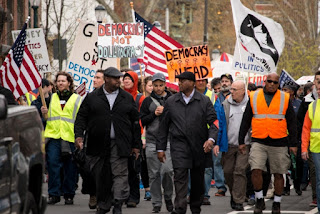 It's been a fascinating week full of great news stories. First of all, Democracy Spring marchers began their 140 mile trek from Philadelphia's Liberty Bell to the Mall in Washington DC. PoliticalRevolution.TV has a live stream broadcast unit embedded in the group and have been broadcasting the marchers live daily as they make their way to the big gathering at the Mall on April 11-18. Read more about their sit-ins plans and protest activities at their web site: http://www.democracyspring.org/ and the reasons why some are marching here. 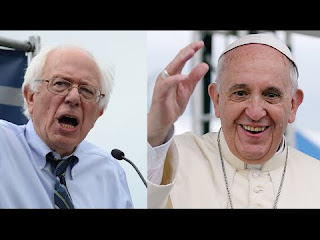 In another Bernie Sanders-related news story, on Friday Pope Francis issued an invitation to Bernie to speak at a conference on social, economic and environmental issues during Bernie's April 15 visit. Bernie has long expressed his admiration for the Pope's moral stance on "the idolatry of money." Both man have remarked on how we should care more for our less fortunate brothers and sisters and take action to clean up the environment for the benefit of all mankind. This auspicious visit takes place just four days before the crucial New York primary, too.

Good luck to you, Bernie, and the best of luck to all our Democracy Spring marchers. #FeeltheBern as you help us realize the political revolution!

How Universal Basic Income Gets Attra…
A Brief Questioning-Meditating on the…
Portuguese Arraiolos Rugs
500 One Word Substitution Book PDF Fr…
The East winds of Digital Currency Ga…
***
Enjoy this song video that shows how much we need a political revolution and read its interpretation by the songwriter.
Evolution of Revolution
by Wayne Gathright
The song Evolution of Revolution is a perfect statement about the transformation of politics that is happening right now in America. The Bernie Sanders political revolution is a result of the frustration that so many people in America feel.
Revolution historically has been about change, but never before has revolution been like what we see today. It has evolved into a dynamic mesh of social media taking advantage of tools such as Twitter, Instagram and Facebook among others, plus the emergence of both the young and old demanding the end of the political establishment that is in the pocket of big business. They are demanding a political candidate and a leader that is willing to be the face of this social wave. This is not just a movement--it is a revolution to overthrow both political and corporate corruption.
The song begins with a statement about the unwillingness of people to even listen to the opinions of others. This typifies the ones that are blind to anything but what they have been fed by the media.
The memorable chorus echoes the frustration that is felt by so many in this movement, and ends up calling for others to participate in the "Evolution of Revolution."
The second verse pokes fun of the "right" and the "left" political parties that are ignorant of the true "hammer that is coming down" from above. That hammer is in the form of a financial crisis, security crisis, environmental crisis or even a social crisis--unless things are changed.
The bridge of the song is a statement that the public is tired of being pushed to the background and holding their tongues. The participants in this social revolution are not afraid to let their voice be heard because they are the ones that are fighting for the freedom of America. They are strong and proud and ready to stand up for what they believe.
***
This Woman is Bernie Strong!
a weekly commentary by female Bernie supporters

This week we have a heartfelt letter sent to our favorite presidential candidate:

How can I encapsulate with mere words the incredible surge of  esprit de corps you have rekindled in my fellow Americans and me? Your courage, strength and constancy continue to elucidate those ideals which so many of us want to preserve and cultivate for future generations. Your campaign shines brightly through the quagmire of our country’s status quo and illuminates the prospect of an improved America, which would restore, among other things, dignity to those who are disenfranchised.

Your long term commitment as a public servant stands as a testament to the true activist that you are. Your optimism continues to awaken and excite those who feel downtrodden, offering a chance for real change and a promise of equitable prosperity. You value people of all colors and creeds. Your integrity is exceptional. What more could we ask from a presidential candidate?

I have heard you speak of political revolution in regards to your grassroots efforts and the changes we as American citizens will create when we work together. Your campaign contribution totals alone are revolutionary, proving the effectiveness of what a group of like-minded people can accomplish. I believe you have had several other revolutions as well: the astounding legions of people in attendance at your venues, the continual positivity of your campaign in spite of the “spin” the other candidates use to thwart your progress, the revival of the true American spirit and “can do” attitude which we all carry within us. Bernie, you demonstrate for all of us what a modern day revolutionary is.

That being said, I believe your candidacy alone has done more than ignite a revolution. Revolutions can only usher a cause so far. What I see has a much farther reach than a revolution.  No longer will the American people accept the elitist status quo. No longer will the American people feel disheartened and unrepresented. Bernie, you have become that pivotal point from which our quantum leap forward begins. You, Mr. Sanders, have championed an evolution.  Our forward momentum cannot be stopped. So, let’s remove the “r” from revolution, take that giant leap together and forge the bonds of the Great American Evolution.

I would like to express my gratitude for the sacrifices that you, your wife, and your children make each and every day for us. Your ever-growing American team, whether they work with you directly or indirectly, deserves my thanks as well.  I am also grateful for my fellow Americans’ incredible displays of support for you and your campaign. May our mutual dream for a renewed America come to fruition. I firmly believe with you at the helm, we have the best chance of making that dream a reality.

While the term hero connotes a multitude of images which may differ from person to person, when we apply that term to you, Bernie, we all stand in agreement. You are our hero! We want you as our president!

With my sincerest gratitude, your fervent supporter,

Bio: Anne says, "Originally from the Chicago area, I've lived in Paris, France and now living the rural life in a small town in Pennsylvania. Graduated from Dominican University (formerly Rosary College) with a BA in psychology and sociology. When I'm not  using my one person makes a difference approach to fan the flames of change to support Bernie, I work with special needs children."

Editor's Note
I've been working on persuading non-progressive voters to consider Bernie Sanders as a presidential choice on a "neutral" political web site. If you can, please visit my blog postings there and hit the "like" check mark at the bottom left side of the blog and/or leave a comment. Feel free to share the blog links (below) with others, too. I realize it might even be easier to get some friends to read a pro-Bernie piece at a web site without his name in the title.
The more hits I get on my writing at Political Storm, the more they'll ask me to write another flattering Bernie piece and so on. It's all part of my plan to help bring about the political revolution one voter at a time. Thank you.
My first post: Our Champion
http://www.politicalstorm.com/our-champion/
My second post (so far): A Consistent Digital Footprint
http://www.politicalstorm.com/consistent-digital-footprint/ 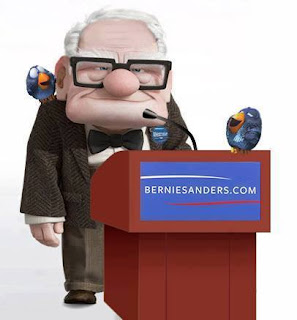 Now, get on out there and phonebank, canvass and spread the news about Bernie Sanders to other voters. Remember it's #NotMeUs. The New York primary is coming soon--help Bernie win it!

The Shell Game (and the Political Revolution)