I won't limit today's post to Lone Star Wrangling, but blend a little of what I've been doing all year with my White House and Election 2020 Updates into it, especially since our beloved Texas is now considered a tossup, and that has Team Blue a-tizzy.


The truth -- as we all should know by now -- is that there has really been no mystery about the outcome of this race for a long time.

The Supreme Court fight is over. There are no more debates between President Donald Trump and Joe Biden. Covid relief negotiations are all but dead. And we appear to have a stunningly static race. https://t.co/Dh79RdBHg3


I thought for most of 2020 that Trump would find a way to pull it out.  He's not going to, and I acknowledged that three weeks ago.

Biden has managed not to screw things up, which is all he had to do.  Oh, he has shot his mouth off a few times lately.  That's as reliable as the sun coming up in the east.  But it's also baked into the sympathy he has manufactured around his 'stutter', and while Trump has spewed bile with more fury than ever since "recovering" from COVID, Joe's foibles just haven't moved the needle. 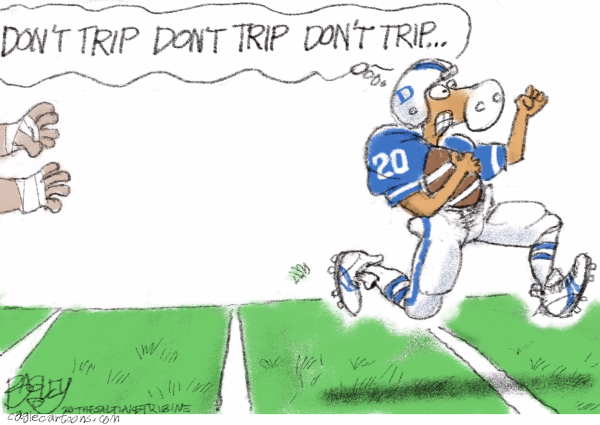 
Since Joe's playing with house money, he's pushing Trump to the edge in states that Democrats haven't flourished in awhile, like Florida, Ohio, Pennsylvania, and Georgia, where electoral mischief will surely run as rampant as it did two years ago.  (Wisconsin is being shoved into the red column by the Supreme Court, but that's a blog post for another day.)

Barring some weird 2016 retro combo of poll dysfunction and Republican chicanery -- yeah, I know; it's Halloween and there's a lot of scared donkeys running around because of reports like this one -- Biden's got it.  And unless the latest Lone Star polling is just missing something -- which could be the case, after all -- I still don't see either Uncle Joe or MJ Hegar carrying Texas.

A University of Houston Hobby School poll shows (Trump ahead of Biden) roughly 50% to 45%. In contrast, a Dallas Morning News/UT Tyler poll shows the opposite -- Biden leading Trump -- 46% to 44%, though 8% were still undecided.

That amount of undecided voters is surprising at this point in the election, according to Lonna Atkeson, a political science teacher at the University of New Mexico.

"Eight percent seems like a lot of undecided voters at this time," Atkeson said. "Maybe they're not undecided. Maybe they really know and they're just not telling."

That could be a result of the poll's methodology, according to Rice University political scientist Bob Stein.

The way a poll is conducted or how the questions are framed could make people feel uncomfortable answering the question of how they voted, Stein told Houston Matters host Craig Cohen on Tuesday.

Go on reading there for Stein's elaboration if this polling methodology stuff is of interest to you.  I find him delving into pyschobabble, but YMMV.

While Biden is keeping it very close in Deep In The Hearta, One Tuff Motorcycle Mama can't say the same about her poll numbers.  Her moneybags are bursting at the seams, but she isn't making it translate.  I would peg her ceiling at 45%, which means she will underperform Beto two years ago, and Democrats can only whine about the 'what ifs' associated with having his name instead of hers on the ballot, or one of the Castros, or even Royce West.

Hegar's flop won't be mourned for long by Senate Democrats if they indeed wind up with 54 or 55 seats this time next week, as Real Clear Politics and 538 are projecting (via Medaite).

Which is why, once more, you can vote Green without fear.

Absolutely the best reason to vote for @qweekat anyone could have dreamed of https://t.co/2OIEnj7ypB via @grist #TX2020


"But I like voting scared and full of rage and hate, PDiddie".

Texas Gov. Greg Abbott's still-unexplained move to send troops to major TX cities to respond to disturbances after the Nov. 3 election would be rare to the point of extraordinary, experts tell @saddamscribe & @jblackmanChron https://t.co/alAETlXZJV @ExpressNews #txlege

On the heels of the #ACB nom: Texas pro-choice advocates are reminding voters how crucial it is to flip the House – just nine seats from a Dem majority – and prevent any more anti-#abortion laws in TX from ever reaching #SCOTUS again. #txlege


Yeah, the Texas House of Representatives.  That one is going to be very close.


I count 75-69 Red Team, with the six greys in the middle on the fence, if you trust Jones' chalk.  He's a Republican; there's a little bias in there for his side.  TXElects showed it closer earlier in the week, but the PACs have been making it rain like the Great Flood on these races, and for my money-- not to mention my sanity -- this is the only thing worth staying up late for next Tuesday night.

we will find out in 7 days. https://t.co/RQAfRrG5OK


No we won't, Manny. It will be a few days after Election Day, maybe a week after.

The rest of my Wrangles and Round-ups posted between now and the end of the weekend will include some Halloween and Dia de los Muertos and other scary Tweets and posts to close out.

Any plans for this #HALLOWEENNIGHT?
We'll screen #classiccult and #horrorfilms and discuss together how these films highlight systemic racism and social justice issues in the US
The FREE LIMITED spots are filling up quickly, save yours now - RSVP: https://t.co/foPWr4zJOz pic.twitter.com/0jZi7Rb6N2

Homeowner wins Halloween with his simple yard sign and it's the whole 2020 mood https://t.co/G56hhHYZFv

San Angelo, Texas- Celebrate Dia de los Muertos (Day of the Dead) with the San Angelo Hispanic Heritage Museum and Cultural Center! The dates will be October 29th, 30, and 31st of 2020, which will consist of a 3 day Virtual Dia de los Muertos eventhttps://t.co/XqXuuKQk5t pic.twitter.com/Pa9aQKY3sK

This is a one-inch fossil coprolite (feces), from the Aguja Formation in the Big Bend. It is quite possibly from a Deinosuchus riograndensis, a 40–50 feet crocodile with 6-inch teeth. In the event you need to know what fossilized crocodile poop looks like, I've got you covered. pic.twitter.com/r5UTlUTVrt