Washington Post Magazine Does Profile On Dennis Kucinich, Calling Him The Future Of American Politics 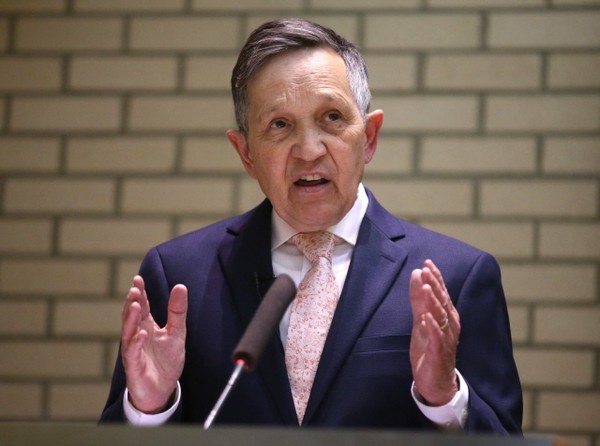 The Washington Post Magazine took a lengthy look at Dennis Kucinich, who is now running for the Democratic nomination for Governor of Ohio. Here are some excerpts:

“Kucinich was ahead of his time in terms of having that progressive politics before it’s popular, before it’s cool,” says Nina Turner, president of Our Revolution, the national progressive advocacy group born out of Sen. Bernie Sanders’s presidential campaign. (Our Revolution has endorsed Kucinich in the governor’s race, though Sanders himself has not taken a position.)

…The candidate himself is too humble and shrewd to take credit for the drift of the times. “To me, it’s arrogant to say, ‘Well, everyone has caught up to me,’ ” Kucinich told me recently. “In terms of where I fit in all this, I was holding that space in the party for 16 years [in Congress] relating to what America’s priorities should be. Trade that included workers’ rights, human rights, environmental-quality principles, a universal single-payer not-for-profit health-care system. And stopping these wars.”

It is indeed too much to say that Kucinich begot Sanders or Trump. Sanders himself was advocating for progressive causes for decades before he picked up 1,900 delegates to Hillary Clinton’s 2,800 in the 2016 primaries — far outstripping Kucinich’s total in 2004. Moreover, Kucinich himself has always had limitations as a politician, and in his upcoming race, he may well lose the nomination to Richard Cordray, who is supported by huge swaths of the Democratic establishment.

Win or lose, however, it is undeniable that Kucinich has long been tuned to a political frequency that few heard until it became a roar. He has vied for offices at nearly every level of American democracy and failed spectacularly while running for the presidency in both 2004 and 2008; nobody has been a has-been in quite the way Dennis Kucinich has been. And yet, right now, there may be no better guide to the strange condition of American politics in 2018…

When it’s his turn to speak, Kucinich takes the microphone and walks to the front of the stage like a tent-revival crusader. He’s dressed in skinny jeans, wingtip boots with thick treads, jacket and tie. His default facial expression is delight, and he wears it now as he prepares to sketch a two-minute fable of how Ohio, and America, got here.

“The Democratic Party lost its soul when they made book with corporate America and started taking corporate America’s money, and it blurred the differences between the two parties,” he says in the voice of a larger man, building in volume and pitch. “The American people caught on because the trade agreements that were made under Democratic administrations said they were going to protect jobs, the environment, workers’ rights. None of those things happened. And so all across this state people got used to the idea that the Democrats would say one thing and do another and wouldn’t deliver. And that opened the door for the candidate who won in 2016.” Trump took Ohio by 8 points. “I can be the person who can bring those people who voted for Donald Trump back into the party,” he declares.

The school shooting in Parkland, Fla., occurred 11 days before the forum, and Kucinich seizes on it to separate himself from the other candidates. In coming days, his campaign will circulate a video of Cordray, as state attorney general, speaking at a Second Amendment rally in 2010 after having submitted a brief in support of a Supreme Court case pursued by gun-rights advocates. “Rich, there’s a reason why you got an A from the NRA and why I got an F,” Kucinich says. “I stand for an assault-weapon ban in the state of Ohio, for the possession, the sale. Where do you stand?”

…When I asked him about his gig as a Fox News contributor, which ended when he started running for governor, he said he’ll use any channel to reach people. He pointed to stands he has taken in his gubernatorial campaign on guns, health care, education, energy and the environment that would be anathema to Trump. “I find myself disagreeing with the president on most everything,” he said. But he told me he can’t help sharing Trump’s wariness toward America’s secret agencies. He cited the discredited evidence used to justify the invasion of Iraq as another example of intelligence sources shaping policy in dubious ways. And he described his own strange personal brush with alleged wiretapping: In 2015, reporters for the Washington Times played for Kucinich a recording of a telephone conversation he had in his congressional office four years earlier with Saif Gaddafi, son of Libyan dictator Moammar Gaddafi. The son was reaching out to Kucinich because he was a leading American voice against the intervention in Libya. The Times reporters did not reveal from whom they got the recordings, which the story said were “recovered from Tripoli.” Kucinich told me the plausible source was a “U.S. or U.S.-related agency,” though he can’t prove it. Later, in early 2017, after Trump charged that Obama had wiretapped him, Fox host Bill O’Reilly invited Kucinich on the air to talk about the Libyan recordings. “If a member of Congress can have his phone tapped on a policy matter, hey, this could happen to anybody,” Kucinich told O’Reilly.

Kucinich’s suspicions about intelligence agencies and worries about tension with Russia are things liberals fretted over a couple of generations ago. Today they are an affront to mainstream Democrats and Trump haters, even as they are shared by right-wing followers of Trump and left-wing skeptics of the liberal and moderate establishments of both parties. In a shaken-up America, Kucinich’s views on foreign policy and related matters mark a new kind of ideological convergence. As Glenn Greenwald suggested to me, “There is a kind of union between neocon centrist Republicans and centrist Democrats against people who are outsiders on the right and outsiders on the left, who are starting to see a lot of things in similar ways as well. And Kucinich is a perfect example of that.”

I wish Kucinich good luck, but wish that instead of running for Governor he was returning to Congress where we need more anti-war voices such as  his. This is especially true with many Democrats joining with Republican neoconservatives,  promoting confrontation against countries such as Syria and Russia. More on this in a follow-up post on Dennis Kucinich.

Washington Post Magazine Does Profile On Dennis Kucinich, Calling Him The Future Of American Politics