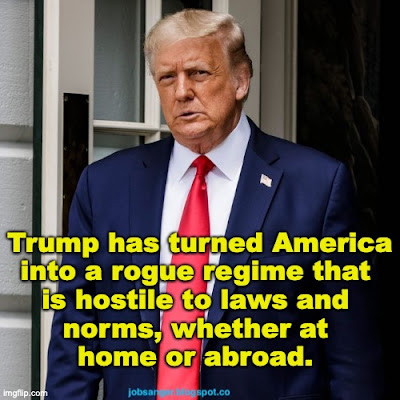 Trump seems determined to turn the United States into a rogue nation. This country was once a world leader in spreading democracy, protecting the environment, supporting world peace, and supporting human rights.

Trump has done serious damage to that. He withdrew the country from the Paris Accords, dealing a blow to efforts to curb global climate change. He withdrew from the Iran Agreement, making the world a more dangerous place. Now he has moved to protect the world's most dangerous Human Rights Violators.

Types of Kisses to Spice Up Your Sex …
How to Develop an Educational App?
“BUY Sqribble? My Honest Review!
Chatfuel Vs BotMyWork Chatbot Builder…
Best Coffee Beans – Everything You Ne…

His administration has imposed sanctions on members of the International Criminal Court -- members whose only "crime" is to hold Human Rights violators to account and further the cause of justice. This puts the United States on the side of other rogue nations -- the worst human rights violators.

Here is some of what Max Boot has to say about Trump's move in The Washington Post:

Since its formation in 2002, the ICC has become known primarily for prosecuting African war criminals. In 2015, for example, the court issued an arrest warrant for Ahmad al-Faqi al-Mahdi, an enforcer for Ansar Dine and al-Qaeda in the Islamic Maghreb when in 2012 those terrorist groups imposed a fundamentalist version of sharia law in Timbuktu, Mali. He was extradited by Niger and, after pleading guilty in 2016, sentenced to nine years’ imprisonment for destroying religious and historical buildings.

The court’s record is far from perfect — far too many criminals have escaped its grasp, and prosecutions have dragged on too long. But at least it is trying to hold some of the worst human rights violators in the world to account. You would think that this would earn the approval of the United States, the driving force behind the 1948 Universal Declaration of Human Rights. But you would be wrong. Trump and his secretary of state, Mike Pompeo, have chosen to taken their stand alongside notorious human rights violators such as Russia, China, North Korea and Sudan in opposition to the ICC. . . .

In June, Trump declared a “national emergency” because the ICC had announced an investigation into possible war crimes committed in Afghanistan by the Taliban, the Afghan government and, yes, U.S. military and intelligence personnel. Kabul has asked the ICC to suspend its investigation, pending legal action by Afghan authorities. Because of this request, and the covid-19 pandemic, Human Rights Watch reports that the ICC is not actively investigating Afghanistan.

There is, in short, no reason to assume, as Trump and Pompeo seem to, that U.S. personnel are about to be hauled off to The Hague — or, in the unlikely event that they do end up in the dock, that they would fail to receive a fair trial. Just last year, two prominent defendants — one of them the former president of Ivory Coast — were acquitted on charges of crimes against humanity.

The Trump administration is also aggrieved that the ICC has been considering an investigation of possible war crimes committed in the Palestinian territories by Israel as well as its enemies. But the ICC has previously refused to open an investigation of Israel’s 2010 attack on a flotilla bound for the Gaza Strip, and it has not announced any decision to prosecute Israel. So this concern, too, is at best premature.

The ICC is a court of last resort; it acts only if national authorities refuse to do so. Trump could actually blunt any impetus for ICC action by taking serious steps to investigate and punish U.S. personnel guilty of misconduct in Afghanistan. But by pardoning alleged war criminals, he is doing the opposite — sending an arrogant message of impunity for U.S. misconduct.

Trump’s war against the ICC places the Trump administration once again at odds with America’s closest allies. Sixty-seven nations — including Australia, Canada, France, Germany and the United Kingdom — have condemned Trump’s sanctions and expressed support for the ICC. “We remain committed to an international rules-based order,” they wrote in June. “The ICC is an integral part of this order and a central institution in the fight against impunity and the pursuit of justice, which are essential components of sustainable peace, security and reconciliation.”

The United States, too, used to be committed to an “international rules-based order.” No longer. Trump has turned America into a rogue regime that is hostile to laws and norms, whether at home or abroad.