The GOP Is Making The Recession Worse - Much Worse! 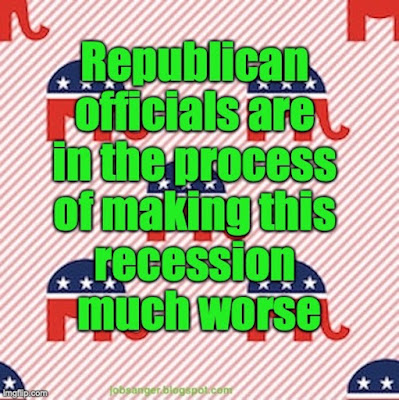 The U.S. has millions of Americans out of work (the official figure is 10.2% of the workforce). And the GDP fell by 9.5% in the second quarter of this year (after falling in the first quarter).

We are in the midst of a recession -- a recession that's worse than the Bush recession of 2007-08. In fact it is rivaling the Great Depression.

Sensible people know that that government must act to prevent the recession from growing even worse. And the Democrats know that, which is why the House passed a second stimulus relief bill a couple of months ago. Sadly though, the Republicans don't seem to realize this.

The Republicans (in both the White House and the Senate) have been unable to agree on any plan to save the economy, and help the millions of workers hurt by the recession. Many of them seem to think nothing needs to be done -- that the economy will magically heal itself in the midst of this pandemic. And the rest only want to give aid to the rich and corporations. Their intransigence will only deepen the recession.

Here is part of how Nobel Prize-winning economist Paul Krugman explains it in The New York Times:

One pretty good forecasting rule for the coronavirus era has been to take whatever Trump administration officials are saying and assume that the opposite will happen. When President Trump declared in February that the number of cases would soon go close to zero, you knew that a huge pandemic was coming. When Vice President Mike Pence insisted in mid-June that “there isn’t a coronavirus ‘second wave,’” a giant surge in new cases and deaths was clearly imminent.

And when Larry Kudlow, the administration’s chief economist, declared just last week that a “V-shaped recovery” was still on track, it was predictable that the Economy would stall. . . .

But things could get much worse. In fact, they probably will get much worse unless Republicans get serious about another economic relief package, and do it very soon.

I’m not sure how many people realize just how much deeper the coronavirus Recession of 2020 could have been. Obviously it was terrible: Employment plunged, and real G.D.P. fell by around 10 percent. Almost all of that, however, reflected the direct effects of the pandemic, which forced much of the economy into lockdown.

What didn’t happen was a major second round of job losses driven by plunging consumer demand. Millions of workers lost their regular incomes; without federal aid, they would have been forced to slash Spending, causing millions more to lose their jobs. Luckily Congress stepped up to the plate with special aid to the unemployed, which sustained consumer spending and kept the nonquarantined parts of the economy afloat.

Now that aid has expired. Democrats offered a plan months ago to maintain benefits, but Republicans can’t even agree among themselves on a counteroffer. Even if an agreement is hammered out — and there’s no sign that this is imminent — it will be weeks before the money is flowing again.

The suffering among cut-off families will be immense, but there will also be broad damage to the economy as a whole. How big will this damage be? I’ve been doing the math, and it’s terrifying.

Unlike affluent Americans, the mostly low-wage workers whose benefits have just been terminated can’t blunt the impact by drawing on savings or borrowing against assets. So their spending will fall by a lot. Evidence on the initial effects of emergency aid suggests that the end of benefits will push overall consumer spending — the main driver of the economy — down by more than 4 percent.

Put it all together and the expiration of emergency aid could produce a 4 percent to 5 percent fall in G.D.P. But wait, there’s more. States and cities are in dire straits and are already planning harsh spending cuts; but Republicans refuse to provide aid, with Trump insisting, falsely, that local fiscal crises have nothing to dowith Covid-19.

Bear in mind that the coronavirus itself — a shock that came out of the blue, though the United States mishandled it terribly — reduced G.D.P. by “only” around 10 percent. What we’re looking at now may be another shock, a sort of economic second wave, almost as severe in monetary terms as the first. And unlike the pandemic, this shock will be entirely self-generated, brought on by the fecklessness of President Trump and — let’s give credit where it’s due — Mitch McConnell, the Senate majority leader.

The question is, how can this be happening? The 2008 financial crisis and the sluggish recovery that followed weren’t that long ago, and they taught us valuable lessons directly relevant to our current plight. Above all, experience in that slump demonstrated both that economic depressions are no time to obsess over debt and that slashing spending in the face of mass unemployment is a terrible mistake.

So at the moment we seem to be headed for a Greater Recession — a worse slump than 2007-2009, overlaid on the coronavirus slump. MAGA!

The GOP Is Making The Recession Worse - Much Worse!