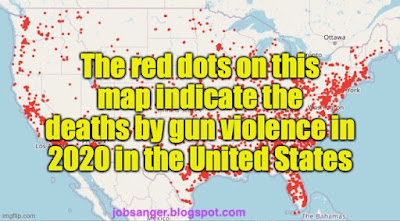 The Coronavirus pandemic is seizing all of the headlines these days from the media. And it should, since it is killing thousands of Americans unnecessarily (due to the failure of Republicans to adequately address it).

But it is not the only epidemic claiming thousands of lives in this country. Gun violence has claimed 25,257 American lives as of 8/8/20 (14,586 suicides and 10,671 homicides and accidents). Last year, the number of gun deaths topped 40,000, and it looks like that will happen again this year.

Like with the Coronavirus, Republicans must also shoulder the blame for failing to deal with the gun violence epidemic. They have been bought by the NRA, who funds their re-election campaigns -- and they follow the NRA's wishes to not have any kind of restrictions on guns. They won't even plug the loopholes in the background check law, which is supported by 90% of the public.

There was a bit of good news this week -- news that may have an impact on the gun violence epidemic. The New York Attorney General completed an investigation into the NRA, and filed charges in a New York Court to dissolve the NRA (which is registered as a charity in New York) and demand its four top executives pay back millions of dollars in NRA money they siphoned off for their own benefit (about $64 million in just the last three years). The NRA leadership was using the organization's funds as their personal piggy bank.

The NRA leadership has said they will fight the charges in court, but it looks like the Attorney General has plenty of evidence to back up her case. The NRA has also filed suit against the Attorney General's office, saying they were denying the NRA's First Amendment rights. That's ludicrous -- the First amendment doesn't protect stealing funds from a registered charity!

If the NRA is dissolved, and there is a good chance of that happening, then that will cut off the funding for those GOP congressmen and senators. It might free them to vote to save American lives, or give opponents a better chance to defeat them at the polls. Either way, it could mean the country could finally have some reasonable and constitutional gun restrictions. Let's hope so!