The Virus Is Spreading And The Economy Is Stalling 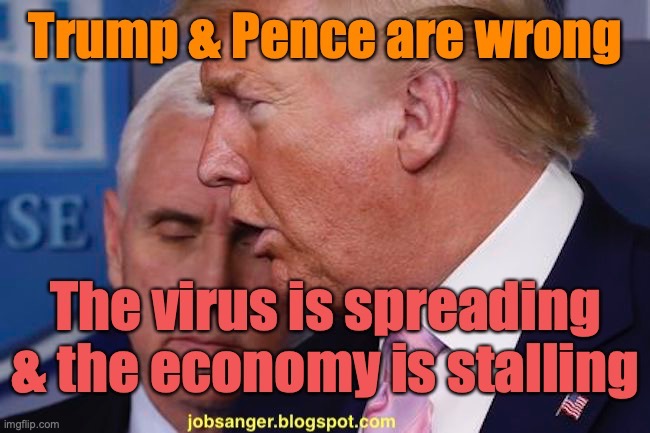 There are over 130,000 Americans who have died from the COVID-19 virus, and that is very likely a serious undercount. But you'd never know that to listen to Trump or Pence. They want you to believe that the Coronavirus is under control, and they are now just putting out "embers". They also want you to believe the economy is strongly bouncing back. Neither of those things are true!

Here's the truth from Paul Krugman in his New York Times column:

Just over two weeks ago The Wall Street Journal published an opinion piece by Vice President Mike Pence titled “There Isn’t a Coronavirus ‘Second Wave.’” The article was supposed to reassure the nation.

With GiftstoIndia24x7.com, this Raksh…
Massacre on Queens Blvd. ’96
Juvenile diabetes and life insurance
Cat Coronavirus Diary – Day 19
How Universal Basic Income Gets Attra…
What it provided, instead, was a clear illustration of the delusions and magical thinking that have marked every step of the Trump administration’s response to Covid-19, producing an epic policy disaster.
Put it this way: By now, according to Trump officials and sycophants, we were supposed to be seeing a fading Pandemic and a roaring recovery. Instead, we have a fading recovery and a roaring pandemic.
About the pandemic: The Pence article cheerily declared that “cases have stabilized,” with the daily average Number of new cases only 20,000. Even that figure, as it happens, was five times the number in the European Union, which has a third more people than America does. Since then, however, new cases have soared, hitting more than 50,000 by some counts on Wednesday.
Indeed, at this point Arizona, with seven million people, is reporting around as many new cases each day as the whole E.U., with 446 million people.
Some Trump supporters are still trying to dismiss the upswing in cases as an illusion created by more testing. But it isn’t. Cases have grown far more than testing has. Hospitalizations have shot up in Arizona and Texas, which are at the leading edge of the new surge; in both states, hospitals are in crisis mode. (Florida, which is probably in the same situation, hasn’t been releasing hospitalization data.) . . .
The thing is, Covid-19’s resurgence was utterly predictable — and predicted. When Donald Trump declared that we would “transition to greatness” — which is to say, rush to reopen the economy despite a still-rampant pandemic — epidemiologists warned that this could set off a new wave of infections. They were right.
And economists warned that while relaxing social distancing would lead to a brief period of job growth, these gains would be short-lived, that premature reopening would be self-defeating even in economic terms. They were also right.
Don’t be fooled by the big jobs number in Thursday’s employment report — a number that still left us down almost 15 million jobsfrom February. The report was a snapshot of the economy during the “reference period,” basically the second week of June. So it’s telling us what was happening before the Covid-19 surge became apparent.
We don’t have official data for what has happened since then, but a variety of real-time indicators suggest that the recovery has stalled or even gone backward. Indeed, things started falling apart even before states began reversing some of their previous moves to reopen. Fear of infection will do that: Many people will avoid going out whatever their governors may say.
As a result, unemployment, still in double digits, probably won’t get much better for a long time.
Now, there isn’t a one-to-one correspondence between jobs and the spread of the pandemic. If we had all worn masks and avoided stupid policies like reopening bars and resuming large indoor gatherings, we probably could have had substantial job gainswithout surging infections. But we didn’t, largely because Trump and Republican governors refused to take sensible actions (and in many cases prevented mayors and other local officials from acting sensibly on their own).
Nor can we simply hit the reset button. Activities we could have safely resumed two months ago, when infection rates were low, aren’t safe to continue given today’s much higher Covid-19 prevalence. That is, we’re in worse shape, even economically, than we would have been if Trump and his allies had taken the pandemic seriously early on.
The really frightening aspect about where we are is that Trump and his people don’t seem to have learned anything from their coronavirus debacle. On Wednesday — Wednesday! — Trump insisted, as he has at every stage of the pandemic, that the coronavirus will “sort of just disappear.”
And the Trumpists are crowing about the June employment number, with no apparent awareness that it’s out of date and the situation has probably worsened in recent weeks.
The sad, even terrifying thing is that Trumpian delusions of success will impose a heavy price on the rest of us.
Right now we should be going all-out to bring the Covid-19 surge under control and making sure that Americans keep getting the economic aid they need. In reality, neither of those things is likely to happen. Infections and hospitalizations will soar further, and millions of Americans will lose crucial economic lifelines in a few weeks.
The next four months are going to be very, very ugly.

The Virus Is Spreading And The Economy Is Stalling