All The Dems Have Flaws - And All Are Better Than Trump 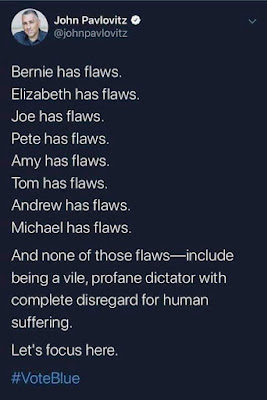 There is a lot of truth in the graphic on the left (from John Pavlovitz).

The supporters of some of the Democratic candidates want us to believe that their candidate is perfect and their opponents are deeply flawed. That's nonsense. There is no such thing as a perfect politician. All of them have flaws, and that includes all of the Democrats running for their party's presidential nomination.

All a voter can do is pick a candidate they like, they generally agree with, or they think would make a good president -- knowing they won't agree on everything.

Here's how Eugene Robinson puts it in his op-ed for The Washington Post.

Look, I know that politics ain’t “Kumbaya.” It would be insane to go through the grueling experience of running for president without trying to win, and that means convincing voters you’re the best for the job. There’s a difference, though, between making the most effective case for yourself and arguing that your opponents are so flawed as to be disqualified for office.

ప్లాన్ మార్చిన రష్మిక మందన్న.. మహానటి…
How to Grow Your Online Business by O…
Ayesem – Rap Skills ft. Tadi All Star…
Empire of Language- Prelude-Metaphors…
I was nervous about switching therapi…
Rather than being nailed to the wall for something they did or said 20 years ago, the candidates need to be given time and space to evolve, just as the nation has evolved. President Barack Obama, you will recall, opposedmarriage equality until the relatively late date of 2012 — long after it was a matter of faith for the progressive wing of the Party.
Sen. Bernie Sanders (I-Vt.), the front-runner, is under withering attack for supposedly being simultaneously the second coming of Karl Marx, a toolof the National Rifle Association and the evil Saruman who marshals legions of online Orcs against his foes. In reality, he is a veteran U.S. senator who generally, though not always, votes the Democratic Party line and who has told the trolls to knock it off.
Mike Bloomberg is being pilloried as a onetime racist, inveterate sexistand Republican-at-heart who is using his vast wealth to try to purchase first the Democratic nomination and then the presidency — all of which is basically true. But he also has a sterling record of advocacy and accomplishment on some issues about which progressives care deeply, including climate change and gun control. And if he wins the nomination, his Flaws will have to be measured against the prospect of four more years of Trump.
And Sen. Amy Klobuchar (D-Minn.) is being slammed for some decisions she made as a prosecutor, including a case in which a 16-year-old was given a life sentence for murder after a questionable police investigation. It strikes me as a likely miscarriage of justice, but it really must be viewed in the context of Klobuchar’s overall record as a prosecutor. One dodgy case does not seem to me disqualifying. Most important, Klobuchar has called for the old evidence in the case to be reviewed and new evidence sought.
That same sense of balance is important in evaluating candidates who show other weaknesses. Joe Biden lacks sharpness at his rallies and in the debates and thus far has run a mediocre campaign. But he shows humanity and compassion in a way that other candidates struggle to do. And despite helping write the crime bill that led to mass incarceration, he has a genuine connection with some key Democratic constituencies, especially African Americans, that could help drive turnout on Election Day.
Sen. Elizabeth Warren (D-Mass.) seems to have lost traction with the media after middling showings in both Iowa and New Hampshire. But the breadth and depth of her grass-roots campaign are truly impressive, and her life story — from a hard-knocks beginning in Oklahoma to a Harvard professorship and ultimately to the Senate — is inspiring.
And Pete Buttigieg has very little experience in government, has had trouble gaining traction among African American voters and has a tendency — as did Obama early in his 2008 campaign — to lecture rather than speak from the heart. But does anyone seriously doubt he is smart enough to be president?
As the candidates make their cases, they should ask voters to look at what really matters. Purity tests are less useful than proof a rival has the ability to learn and to grow. Differences in style and emphasis are not mortal sins.
The party will have to unite — not superficially, for the duration of the balloon drop at the convention in Milwaukee, but genuinely. So dial back the hissing and spitting, people. It only helps Trump.

All The Dems Have Flaws - And All Are Better Than Trump