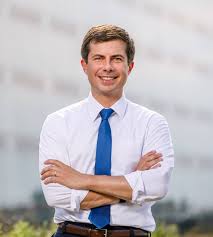 Mayor Pete Buttigieg officially announced his candidacy for the Democratic Party presidential nomination in 2020. He made the announcement in a speech from his hometown of South Bend, Indiana. He said:

My father immigrated to this Country because he knew it was the best place in the world to get an advanced education. He became an American citizen and he met my mother, a young professor who was the daughter of an Army colonel and a piano teacher. They moved here for work, settled into a house on the West Side, and pretty soon after that, I came on the scene.