Trump Wants To Alter The Constitution By Executive Order 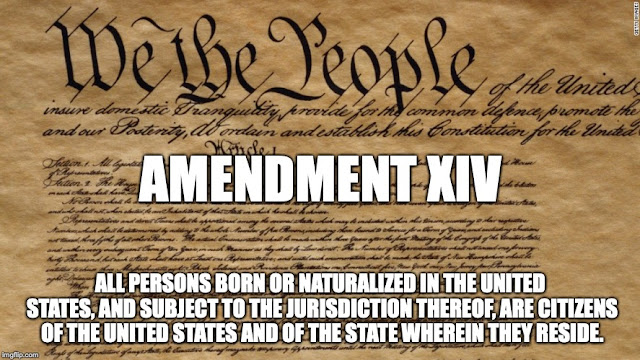 The Fourteenth Amendment to the United States Constitution guarantees citizenship to any person born in the United States. It's commonly called "birthright citizenship". Donald Trump doesn't like it, and he thinks he can change that by issuing an executive order.

In an interview with Axios on HBO, Trump said the following:

"It was always told to me that you needed a constitutional amendment. Guess what? You don't."

"You can definitely do it with an Act of Congress. But now they're saying I can do it just with an Executive order."

"It's in the process. It'll happen ... with an executive order."

Trump is also wrong about the United States being the only country that has birthright citizenship. (See below for other countries that offer it).

Maybe Trump thinks the conservative majority on the Supreme Court will back his effort to change the Constitution by executive order. I doubt it though. I think most of those conservative justices would support a literal reading of the Fourteenth Amendment (which is very clear about birthright citizenship).

More likely is that this is just more red meat for his racist and xenophobic base -- to get them out to vote in this congressional election (like his demonization of immigrants and refugees).

Other countries with birthright citizenship:

Trump Wants To Alter The Constitution By Executive Order