Trump Willing To Destroy "Rule Of Law" To Protect Himself 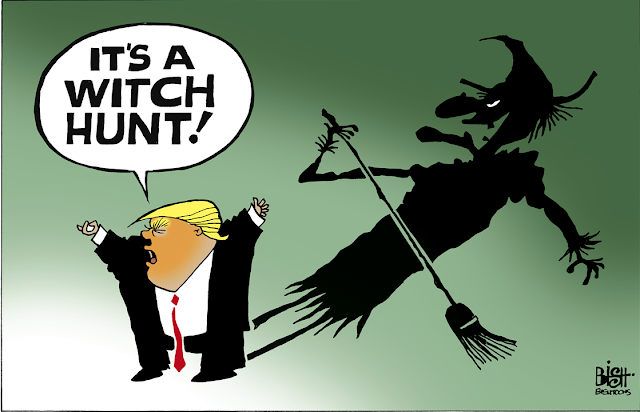 (Cartoon image is by Randy Bush in the Pittsburgh Tribune-Review.)

Donald Trump threw a hissy fit on national television on Monday after learning his attorney had been served a search warrant and had documents seized. Trump obviously feels the investigations are closing in on him, and fears for both his presidency and his freedom. Sadly, he showed that the rule of law means nothing to him, and he's willing to discard it to protect himself.

David A. Graham has written an excellent article for The Atlantic on Trump's assault on the rule of law. I urge you to read the entire article. Here is just a part of it:

It’s not hard to see what Trump means here. His beef with Sessions is not that the attorney general broke any rules; it’s that his recusal prevents him from being in a position to interfere politically to protect Trump, and his aides like Cohen. Indeed, Trump has repeatedly voiced, both publicly and privately, his belief that the job of the attorney general is to protect the president, rather than to serve as the government’s top lawyer. This view is a radical departure from the standard approach. Trump would prefer that Sessions break the rules, and do it for Trump’s benefit.

“This is the most biased group of people,” Trump said Monday, apparently referring to Mueller’s team. “These people have the biggest conflicts of interest I have ever seen. Democrats—all. Either Democrats or a couple of Republicans who worked for President Obama.”

This is, unsurprisingly, misleading. Mueller is a lifelong Republican (though Obama appointed him to continue a tenure as FBI director that began under George W. Bush). Several members of the special counsel’s team are Democrats or donated to Obama or Clinton. Yet most of those in Trump’s doghouse right now are Republicans: not just Mueller, but Sessions, Rosenstein, Comey (who he also attacked Monday), and Geoffrey Berman, the U.S. attorney, who is a former lawyer at Rudy Giuliani’s firm and whom Trump appointed to his post after reneging on a promise and firing Preet Bharara. Believing that all of these men, especially Sessions, are part of a Democratic cabal against Trump requires more than an active imagination. It requires delusion.

Trump’s claims of persecution also ring increasingly hollow. If this is a witch hunt, Mueller has uncovered a whole coven. Trump’s former national-security adviser, Michael Flynn, and deputy campaign manager, Rick Gates, have both pleaded guilty to charges and are cooperating with Mueller. So has a campaign aide, George Papadopoulos. There is a damning indictment against Paul Manafort, Trump’s former campaign chairman. There are multiple open lines of inquiry into Trump aides. It is true that no authority has yet indicted anyone for any specific crime of collusion, but to state, as Trump did Monday, that “they found no collusion whatsoever with Russia” is to declare the outcome of the ballgame at the end of the third inning.

Trump continues to be angry that Hillary Clinton was not prosecuted, though it’s unclear what crimes she might have committed, and has publicly complained that Sessions is not pursuing her. “The other side, they don't even bother looking,” Trump said. “And the other side is where there are crimes, and those crimes are obvious. Lies, under oath, all over the place.” Not only has Clinton already been subject to investigations (which ended without charges), but what Trump fails to grasp is that it is not the president’s role to decide who has committed a crime and who should be prosecuted.

This idea, that there is a regimented process for charging people and that it ought not to be determined by political vendettas or the whims of the head of government, is central to the American project, even if the nation has at times fallen short of it. Trump has long struggled to understand and accept the idea of the rule of law. On the campaign trail, he promised to lock Hillary Clinton up and questioned the right of a federal judge to oversee a case involving Trump University. Monday’s comments, including his stunning equation of a legal warrant with a burglary, are the clearest demonstration that Trump is engaged not just in a political attack, but in a campaign against the rule of law, and the U.S. approach to justice, itself.

Trump Willing To Destroy "Rule Of Law" To Protect Himself