The U.S. Has Both A Wage And Poverty Gender Gap 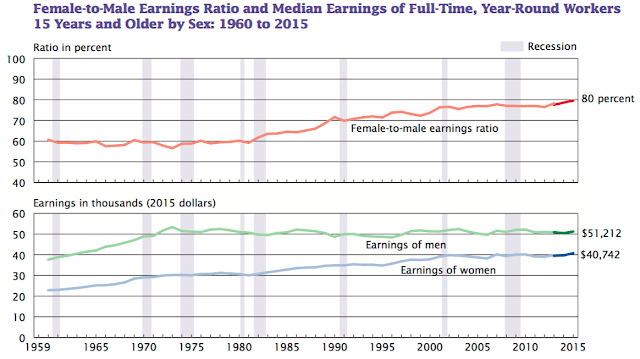 The two charts above are from the latest report from the United States Census Bureau. It highlights a very troubling fact about the United States. We have a serious gender gap between men and women in both the poverty rate and the wage rate.

Far more women than men are living in poverty in the United States. Part of the reason is because there are more single women trying to support a family than single men doing the same -- and many times they are doing it without any help from the absent parent. But I have to believe that the second chart above highlights a major reason why this is true. Women are still making less than men in the workplace.

According to the Census Bureau, women only make 80 cents for each dollar men earn. That is unfair, but it also contributes to the problem of a higher percentage of women living in poverty. This is just wrong in a country that prides itself on valuing equal treatment and opportunity.

The only way to eliminate the gender pay gap, and raise millions of people out of poverty, is to vote the Republicans out of power this November.

The U.S. Has Both A Wage And Poverty Gender Gap