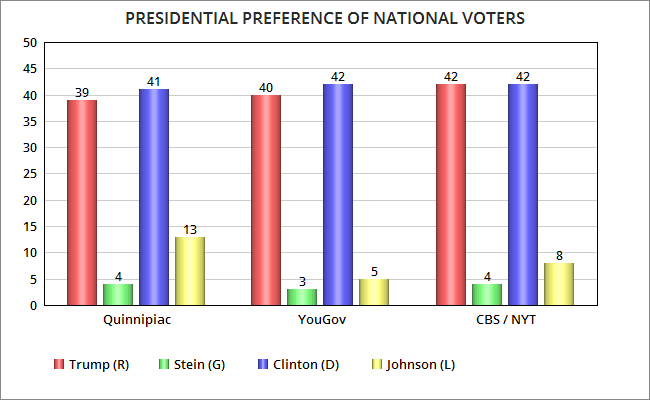 The Quinnipiac University Poll was done between September 8th and 13th of a random national sample of 960 likely voters, and has a margin of error of 3.2 points.

The Economist / YouGov Poll was done between September 10th and 13th of a random national sample of 1,300 voters, and has a margin of error of 3.9 points.

The CBS News / New York Times Poll was done between September 9th and 13th of a random national sample of likely voters (taken from a sample of 1,433 registered voters), and has a margin of error of 3 points.

All three polls reflect a much tighter presidential race. The Quinnipiac and YouGov polls give Clinton a 2 point edge, while the CBS/NYT poll shows a dead heat.

Let me issue a word of caution about these results. Since Labor Day, most polls are now using a sample of "likely voters" rather than the full sample of "registered voters". These likely voter samples are based on how voters have responded in the last few elections. They tend to be slightly slanted more Republican, since Republicans have voted in higher percentages than Democrats or Independents in the past few elections.

I don't think that'll be true in this election. Donald Trump scares the hell out of a lot of Democrats and Independents, and I think that will drive them to the polls in larger percentages -- and if I'm right, that means the likely voter samples being used are skewed.