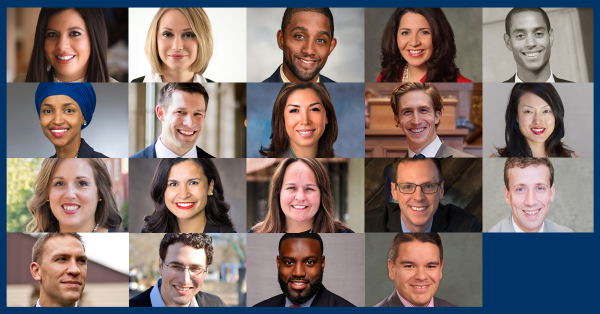 On the eve of President Donald Trump’s first State of the Union address, a national network of elected officials 35 years old and younger released a collaborative vision for how America could live up to its promise here at home and around the world.

“America’s Cabinet,” a nonpartisan project of the Young Elected Officials Network(YEO), is made up of a diverse group of 19 officials representing a range off races, ethnicities, genders, and sexual orientations. Representing 13 states, cabinet members include state legislators and city officials from the coasts to the Great Plains.

“The president’s State of the Union is sure to be filled with policies that have little chance of passing, but these young leaders have bold ideas they’re implementing right now in their own constituencies. They’ve passed legislation in Colorado that feeds more schoolchildren and created programs in Wisconsin that give workers the skills they need to compete. From California to Maine, they’ve moved beyond the partisanship that has become so characteristic of Washington D.C. These are proven leaders.”
Launched at the National Press Club in Washington, D.C., members of “America’s Cabinet” shared their vision of the country’s future and how they hope to transform policy debates to improve the lives of all Americans.

“As a nation built by immigrants, we must adhere to immigration policies and tactics for immigration control that recognize the strengths that these individuals bring to our nation. Tearing families apart at our border, holding them in overcrowded detention centers without basic human necessities, and preventing people from entire countries from entering the United States makes our country less safe, not more. I want to use America’s Cabinet as a platform to raise the dialogue around these current dangerous and unconstitutional policies that do not reflect the values of our nation and are un-American.”

“Now more than ever, the American people need new, bold leadership. We need leaders with vision who are working to strengthen families and communities in our urban centers, lifting millions out of poverty by empowering and investing in them to rebuild every aspect of their community. As Secretary of Housing and Urban Development for America’s Cabinet, I look forward to meeting the American people to listen to their needs and to discuss new bold policy ideas that will improve the lives of all Americans.”

Jane Kim (Attorney General), who is a member of the San Francisco Board of Supervisors said

“We must articulate an alternative vision for America to implement policies that correct historic injustices, uphold our democratic rights and expand opportunity for all people.”

“In today’s political climate, it’s so important for young progressive leaders to step up and demand that our country live up to the promise of opportunity and fairness for all. For that reason, America’s Cabinet seeks to move beyond the politics of opposition and derision by offering bold policy proposals in order to create a government that works for everyone, not just the wealthy and well-connected.”

Michigan State Representative Jon Hoadley (Secretary of Treasury), who was selected as the Secretary of the Treasury for America’s Cabinet, said

“America is ready for a new generation of leadership, and America’s Cabinet is showcasing how young leaders are making a difference across the country right now. Starting today — on day one — America’s Cabinet is offering real policy solutions to challenges faced by Americans every day, both those we’ve faced for generations and those newly created by the Trump administration.”

“This challenging political era demands dedicated leadership focused on real solutions and real people. If no one else will, America’s Cabinet will meet that demand for the American people. I count it an honor being a part of this group of young elected leaders willing to push against the status quo for the sake of our communities, who deserve more.”