Non-Cooperation and the Olympic Games 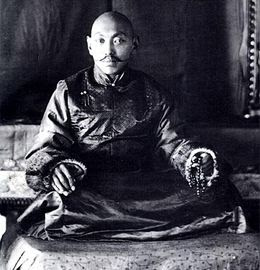 "The present era is rampant with the five forms of degeneration, in particular the red ideology (....)

"In future, this system will certainly be forced either from within or without on this land that cherished the joint spiritual and temporal system. If in such an event we fail to defend our land, the holy lamas, including the "triumphant father and son" will be eliminated without a trace of their names remaining; the properties of the incarnate lamas and of the monasteries along with the endowments for religious services will all be seized. Moreover, our political system will be reduced to an empty name; my officials, deprived of their patrimony and property, will be subjugated like slaves by the enemy; and my people, subjected to fear and miseries, will be unable to endure day or night. Such an era will certainly come!"

These were the words of Thubten Gyatso, the 13th Dalai Lama of Tibet, spoken two years before his death in 1931 (pictured above). With the exception of the demise of the Dalai Lama himself (the 'triumphant Father), all that he stated has come to pass. The scope and power of the prophecy culminated in 1995, when at the age of 6, Gedhun Choekyi Nyima was kidnapped by the Chinese government mere days after being recognized as the 11th Panchen Lama of Tibet (i.e. the 'son' and second most important leader in Tibetan culture). Nobody has seen him, nor his parents, since.

I am writing now from Dharamsala, India - home of the current Dalai Lama and the Tibetan Government in Exile - where the lead up to the Olympics, the complete lack of tangible support from other governments, and the combined weight of 59 years of Chinese atrocities are the central issues of daily life for the town's Tibetan population.

Since China's invasion in 1949, an estimated 1.2 million people have lost their lives through murder, starvation and disease. Six thousand monasteries were destroyed and the Chinese have continued with an unabated policy that seeks the destruction of Tibetan culture ever since.

It is against that historical backdrop that the International Olympic Committee awarded the 2008 Summer Games to China. The move is sometimes compared to the 1936 Games in Nazi Germany; however, Germany was awarded those games in 1933 prior to Nazi control of government, and the games were held prior to the Nazi invasion of Austria and prior to their systematic extermination of Jews. By comparison, China was granted the games after being the demonstrable perpetrator of an invasion against an independent nation and the systemic annihilation of a culture.

In the 59 years since the Chinese invasion the western response and characterization of China's policy has become increasingly miasmic. It is enlightening to return for a moment to 1960, when a report by the International Commission of Jurists called the Chinese invasion and actions in Tibet what they always have been - genocide. To quote:

"According to the Convention for the Prevention and Punishment of Genocide, which was adopted by the General Assembly of the United Nations in December, 1948, Human groups against which genocide is recognized as a crime in international law are national, racial, ethnic and religious. The committee found that acts of genocide had been committed in Tibet in an attempt to destroy the Tibetans as a religious group..."

Further, we often hear about "human rights abuses" committed by China. That is a television friendly phrase that sheds little light on what has been perpetrated against the Tibetan people. Again, the Jurists' report leaves little room for speculation,

"The Committee came to the conclusion that the Chinese authorities in Tibet had violated the following human rights,

Article 3 - the right to life, liberty and security of person was violated by acts of murder, rape and arbitrary imprisonment.

Article 5 - Torture and cruel, inhuman and degrading treatment were inflicted on the Tibetans on a large scale.

Article 12 - Rights of privacy, of home and family life were persistently violated by the forcible transfer of members of the family and by indoctrination turning children against their parents. Children from infancy upwards were removed contrary to the wishes of the parents.

Article 16 - The voluntary nature of marriage was denied by forcing monks and lamas to marry. (Allow me to paraphrase so as to ensure we are being crystal clear here. Buddhist monks and nuns who had taken voluntary and spiritual vows of celibacy were forced to fuck, sometimes each other, by Chinese authorities.)

Article 18 - Freedom of thought, conscience and religion were denied by acts of genocide against Buddhists in Tibet and by other systematic acts designed to eradicate religious beliefs in Tibet.

Article 26 - The right to liberal education primarily in accordance with the choice of parents was denied by compulsory indoctrination, sometimes after deportation (see Article 12), in communist philosophy.

Article 27 - The Tibetans were not allowed to participate in the cultural life of their own community, a culture which the Chinese have set out to destroy."

I could go on. Those were merely the most harrowing of the 16 human rights violations China was found guilty of.

Since that time, they have been condemned by other nations and NGOs for subjecting Tibetan women to forced sterilization and abortions and for systematically denying employment, health care and education to Tibetan citizens. Those who have escaped to India tell more graphic tales of torture including crucifixion, vivisection, disemboweling, dismemberment and burning. Women have been electrocuted on breasts and in their mouths and vaginas while other individuals were buried alive.

On August 8th, the nation that perpetrated these crimes, and that continues to engage in wide spread human rights abuses, will be hosting the world in the 29th Olympiad, an event that supposedly honours "universal fundamental ethical principles". The Beijing games are an offense that strikes the very core of these human values.

Having granted China the games, the IOC will do nothing to oppose them. Nor will there be a boycott from any of the 200 nations slated to compete in them. Action on this issue rests with us.

So in keeping with the themes I began several weeks ago in Generosity, Non-Violence and Non-Cooperation, here are a few meaningful actions that you can take in protest of the Beijing Games.

Athletes - You are the key individuals in the games. Without you there are no games. Given that governments will not boycott you can do so yourself. The higher profile you are, the bigger news it will be, and the more attention it will draw to the Tibetan cause. This legitimately may not be possible in light of corporate sponsorship deals. In this case, compete, and if you win a medal leave it behind on the podium or do not show up to accept it. Academy Awards have been refused. You can do the same with your medals.

In addition to dreams of victory, you may also have dreams of bringing home the medal itself, of displaying it proudly in your home, or making it an heirloom for you children. If so, know that the gold, silver or bronze of your victory was mined through the deforestation, pollution the destruction of the Tibetan environment while the Tibetan people received little to no economic benefit. Is this the heirloom you would leave your children? Or want around your neck?


Viewers - You are the second most important group of people. Through the sale of television rights the IOC has generated $2.5 billion in revenue. That is money networks anticipate getting back in spades through the sale of advertising time. But that is only a smart investment if people actually watch.

You are directly responsible for the profits that are realized by television networks from the games. Do not watch them. Don't watch an event, don't even watch the highlights. If you see your favorite newspaper, or magazine, with a cover story on the outcome of an event do not buy it.

If you think this sacrifices too much of your entertainment time, then I ask you 'what do you value in your life'? What values do you intend to communicate to your children? How important is this single entertainment event when you live in a world brimming with entertainment opportunities? Will you play your part in generating profits in an Olympics being held within a regime condemned for acts of genocide? Will you let your children watch that event? Is entertainment more important than the future of a peaceful culture and the lives of 6 million people? You can also ask yourself how much you remember from the last games, or better still the ones before that. Probably not much.

I am an avid sports fan and have followed every Olympics since 1984. I will not watch a minute of these games.


Shoppers - Olympic memorabilia and authentic Olympic sporting goods will be plugged mercilessly from now through Christmas. There is a fully functional and equivalent alternative available through competing brands for whatever equipment you need. Choose the alternative. Especially if it is a gift for your child. It is a chance to show them how their actions impact the lives and survival of others in the human family.

After your purchase, send a note along with the sales receipt to your National Olympic Committee (links available through the map here), and your national TV network, explaining why you didn't watch the games and why you are not supporting them as a consumer. If you are feeling extra motivation, send another copy to your Minister of Sport, Prime Minister or President.

Pass it on - individual action accumulates weight and effectiveness with numbers. Share these actions with friends, family, fellow students or workmates. If you are taking part in protests or actions, make these actions a part of your communications efforts. A two hour protest will leave little impact unless each individual who attends is empowered to take meaningful action in their own lives.

Most importantly, add your own ideas to the list above. These are only the actions that came immediately to mind and is by know means exhaustive.

Finally, if you feel that your actions do not matter, or won't amount to anything, then I leave you with the words of His Holiness the current Dalai Lama,

"It is therefore part of our responsibility towards others to ensure that the world we pass on is as healthy, if not healthier, than when we found it. This is not quite such as difficult proposition as it might sound. For although there is a limit to what we as individuals can do, there is no limit to what a universal response might achieve. It is up to us as individuals to do what we can, however little that may be. Just because (our action) seems inconsequential, it does not mean that we should not do it."

postscript - Incidentally, in light of recent protests do you know the history of the Olympic torch relay? It has no precedent in ancient Greece. It was introduced as a propaganda stunt to embrace other nations around the totalitarian ideology of, you guessed it, Nazi Germany.


This post first appeared on The Conscious Earth, please read the originial post: here
People also like
Is President Biden really surrounded by Demonic Hedge of Protection?
UNice Hair – Pre-Summer Sale: 31% OFF
8 Steps You Can Take to Empower Your Workforce
USDA Announces April 2022 USDA Tribal Consultation on Barriers and Equity

Non-Cooperation and the Olympic Games