Okay take some rest from the World Cup preparations as well the so-called historical summit between two sick men in Singapore and listen to a new episode of Egyptian Chronicles’ Ramadan Arabian Nights podcast.
We are getting closer to our finale for our tale this year, only three episodes are left.
Now without further due, you can listen to episode no.288 from the Egyptian State radio’s Classical One Thousand and One Nights show in Arabic after the break
Your browser does not support the audio element.
Sheikh Wahdan joins his brother Sheikh Etman or that what he thought as he finds Princess Maimona’s maid instead of his brother at the prison cell. She explains to him everything. Next day, Maimona shows up with another maid and she repeats her escape plan to help Wahdan and get him out of prison. 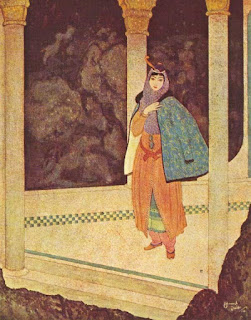 Now both of her maids are in jail. Meanwhile, for the third night in a row, King Kasseman sees a nightmare in his sleep. This time it is an unknown man who turns him into a Brass statue for his injustice.

When he wakes up angry, he finds a shock waiting for him at the Diwan. He is told that Sheikh Etman and his brother Wahdan escaped from their prison with the help of the two maids. The two maids confess in front of his for fear of death Princess Maimona behind that escape plan.
Brave Maimona defies her father and defends her political choices as well as her people and their people in front of him.  Angry like hell, Kasseman orders her execution by using brass and lead.

Suddenly a strange and unknown man comes into the from nowhere with a big bag and inside it a big brass cauldron “Yes, the brass vendor” and it turns out that he is the man the Cruel King saw him in the nightmare.
Because he ignored his warnings through dream medium, that strange man decides to punish Kasseman especially the cruel King refused to listen to that tale about that Djinn king and his sons “yup, that amazing tale”
The punishment will be a curse that will turn the city and its people above them Kasseman into brass for 1000 years.
Till we meet next night inshallah.